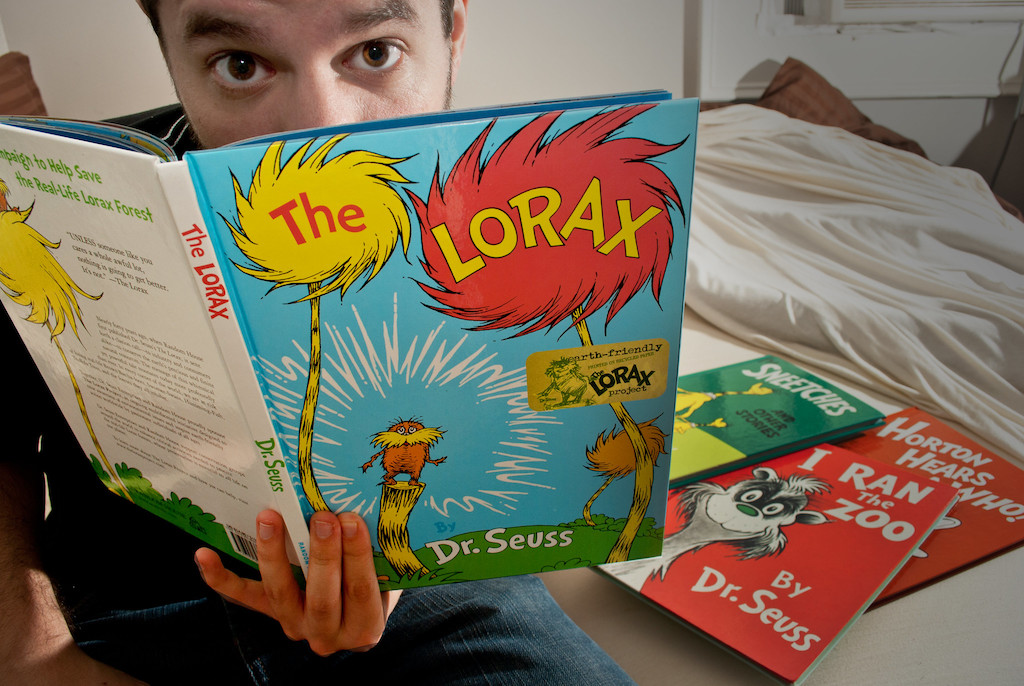 It’s been a year since the last UN Climate Summit (COP-26) in Glasgow. COP-27, will begin this coming Sunday, November 6, in Sharm el-Sheikh, Egypt. This year the United Nation’s flagship climate conference will take place against the backdrop of the climate, energy and food crises, and will place special emphasis on addressing the damage already done and making good on past promises. While this climate congress tends to emphasize plans to cut emissions and limit global warming, it’s important to note that that there has long been concern over a myriad of environmental issues, including biodiversity.

At the height of the Cold War, Dr. Seuss wrote of the danger in his book The Lorax. The book came out just before the first anniversary of Earth Day in 1971. (The story of Ted and the Truffula Trees was first appeared on Cold War Studies in 2021.)

Seuss begins his book by tackling a topic that’s of great interest today, deforestation, and its impact on biodiversity. A creature called ‘the Lorax’ is missing and there are many questions:

We soon learn that there is someone who knows the answer to these questions, a man called the Once-ler.

The Once-ler is a bit greedy and he will only tell you how ‘the Lorax was lifted away’ if you agree to pay. Once you do, he’ll call you by Whisper-ma-phone and tell you secrets that are ‘for your ears alone.’ Lucky for us, a young boy named Ted Wiggins hears the story and decides to pass it on.

The Once-ler paints Ted a word picture of an idyllic pre-industrial environment, populated by Humming-Fish splashing around, Swomee Swans, and “Brown Bar-ba-loots frisking about in their Bar-ba-loot Suits as they played in the shade and ate Truffula fruits.”

But those trees! Those trees!
Those Truffula Trees!
All my life I’d been searching
for trees such as these.
The touch of their tuft
was much softer than silk.
And they had the sweet smell of fresh butterfly milk.

The Once-ler is so taken by the trees that stretch for “mile after mile in the fresh morning breeze”  that he knows just what to do:

In no time at all, I had built a small shop.
Then I chopped down a Truffula Tree with one chop.
And with great skillful skill and great speedy speed,
I took the soft tuft, and I knitted a Thneed.

Now, we’re off to the races. The Once-ler will soon cut down all the Truffula Trees to create a product called Thneeds, and as Thneeds become a ‘must have’ item, more and more trees will be harvested.

I’m sure you can guess what happens. Soon there are no more trees, and no more Bar-ba-loots who lived in the trees. Sound familiar?

Today one million of the world’s estimated 8 million species of plants and animals are threatened with extinction, and many of the ecosystem services essential for human wellbeing are eroding.

So, as it turns out, Seuss was quite prescient. But, even so, I’m a bit confused about the focal point of The Lorax. Environmental concerns in the 1970s weren’t primarily focused on desertification, coral reefs, biodiversity or extinction. Instead, the major issues of the day centered on nuclear and chemical pollution, Three Mile Island, oil spills, soil contamination, toxic waste, herbicides in South East Asia, and, later, the ozone layer.

So why was Seuss concerned with issues of deforestation and biodiversity? I’m just surmising, but one can make an argument that it was all about the Cold War. We know that Seuss was political and perhaps he picked up on a theme that’s detailed in a relatively recent book titled The Cold War and environmental history: complementary fields by Simo Laakkonen, Viktor Pál & Richard Tucker. The book, published in 2016, sees the Cold War as signifying “a global power struggle over the control of natural resources.” It argues:

The Cold War was not only for the hearts and minds of people, it was also for their mouths and bellies, that is, for food, energy and raw materials . . . In addition to the increasing consumption of natural resources and resulting pollution, the destructive capacity of the weapons of mass destruction compelled human beings to recognise that their activities could ultimately endanger the planet earth. The Cold War was a propagator and framework for the birth of global catastrophism and also for the emergence of a global environmental awareness. Nature, its exploitation and also gradually its protection, opened up yet another front in the Cold War . . .

In fact, some of the areas most impacted by the Cold War have ended up as protected nature preserves. A good example can be found in Germany where former Soviet military bases are being turned into grasslands. You can read all about it here, and, if you find the topic of interest, there are more articles listed at the end of the post.

“Look, Lorax,” I said. “There’s no cause for alarm.
I chopped just one tree. I am doing no harm.
I’m being quite useful. This thing is a Thneed.
A Theed’s a Fine-Something-That-All-People Need!”

Well, one thing leads to another and soon the Once-ler’s Thneeds are jumping off the shelves.

Confronting the Threat of Communism

The consumerist culture that the Lorax encounters reminds me of the rush to consumerism in the beginning years of the Cold War. The motivation is different though. The Once-ler just wants to make money but, in the early 1950s, some believed that the threat of communism could be countered with consumerism. The US pushed consumerism and manufacturing in order to flood European markets with American goods, aiming to combat communism with refrigerators and washing machines.

Europeans weren’t the only consumers, however. Between 1945 and 1949, Americans purchased 20 million refrigerators, 21.4 million cars, and 5.5 million stoves, a trend that continued well into the 1950s, peaking in 1959 with a “Kitchen Debate” between Soviet Premier Nikita Khruschev and the US Vice-President Richard Nixon.

Nixon took advantage of the debate opportunity to show off the standard of living available to ordinary Americans under capitalism. You can read more about it here and then watch the YouTube video below for a taste of the debate which took place at the opening of the American National Exhibition at Sokolniki Park in Moscow on July 24, 1959. The description for the YouTube video points out that “an entire house was built that the American exhibitors claimed anyone in America could afford. It was filled with labor-saving and recreational devices meant to represent the fruits of the capitalist American consumer market.”

Back to The Lorax

Getting back to The Lorax, just as Americans couldn’t buy consumer goods fast enough in the aftermath of World War II, the greedy Once-ler can’t keep up with the demand for Thneeds.

Now, chopping one tree at a time seems way too slow so he invents a Super-Axe-Hacker to speed things up, and soon he’s making Thneeds four times as fast as before. As production increases the air is filled with “smogulous smoke” and the pond is glumped “where the Humming-Fish Hummed.” When confronted with the damage he’s causing, the Once-ler makes clear again that he’s going to just keep on doing what he’s been doing.

And at that very moment, we heard a loud whack!
From outside in the field came a sickening smack
of an ax on a tree. Then we heard the tree fall.
The very last Truffula Tree of them all!

Past Choices Are Haunting Us

In today’s world the choices we made in the past are haunting us. Here are just a few examples from Robert J. Gordon’s 2016 book titled The Rise and Fall of American Growth (The US Standard of Living Since The Civil War) that show an impact on resource use in the United States.

Note: If you’d like more specifics about how building and transportation work together, check out this article in Treehugger.

It’s interesting to note that agriculture contributes to greenhouse gas emission and is negatively affected by  changes to the environment as well when conditions disrupt food availability, reduce access to food, and affect food quality. But that’s a story for another day.

I think it’s safe to say that many of us would like a redo. But since that’s not possible, maybe we should take to heart the message the Lorax passed on to the Once-ler by way of Dr. Seuss:

“But now, says the Once-ler,
“Now that you’re here,
the word of the Lorax seems perfectly clear.
UNLESS someone like you
cares a whole awful lot,
nothing is going to get better.
It’s not.

Plant a new Truffula. Treat it with care.
Give it clean water. And feed it fresh air.
Grow a forest. Protect it from axes that hack.
Then the Lorax
And all of his friends may come back.

The Featured Photo is by Bryan Rosengrant. You can find his work on Flickr.

Here are some more articles related to the impact of the Cold War on the environment as well as post Cold War changes.

Other articles include a National Geographic article on Gunkanjima Island (also known as Hashima Island) near Nagasaki titled Abandoned ‘Battleship Island’ Is Crumbling. Can It Be Saved? The article starts by stating: “When humans left, nature prevailed. On Hashima Island, a 16-acre patch of land off the southern coast of Japan, grass and vines and flowers flourish as concrete and steel wither.”

If you like pictures, you’ll want to take a look at CNN’s photo essay titled Wildlife is flourishing in these demilitarized zones.

An article in The Guardian tells How Wildlife is thriving in the Korean peninsula’s demilitarised zone, noting that “The forces that lock humans out of the DMZ have allowed other species to thrive . . .”

And, finally, the UN Environmental Program documents how “many people think the area around the Chernobyl nuclear plant is a place of post-apocalyptic desolation. But more than 30 years after one of the facility’s reactors exploded, sparking the worst nuclear accident in human history, science tells us something very different. You can read the article here.

The Lorax is now a Disney Pixar movie