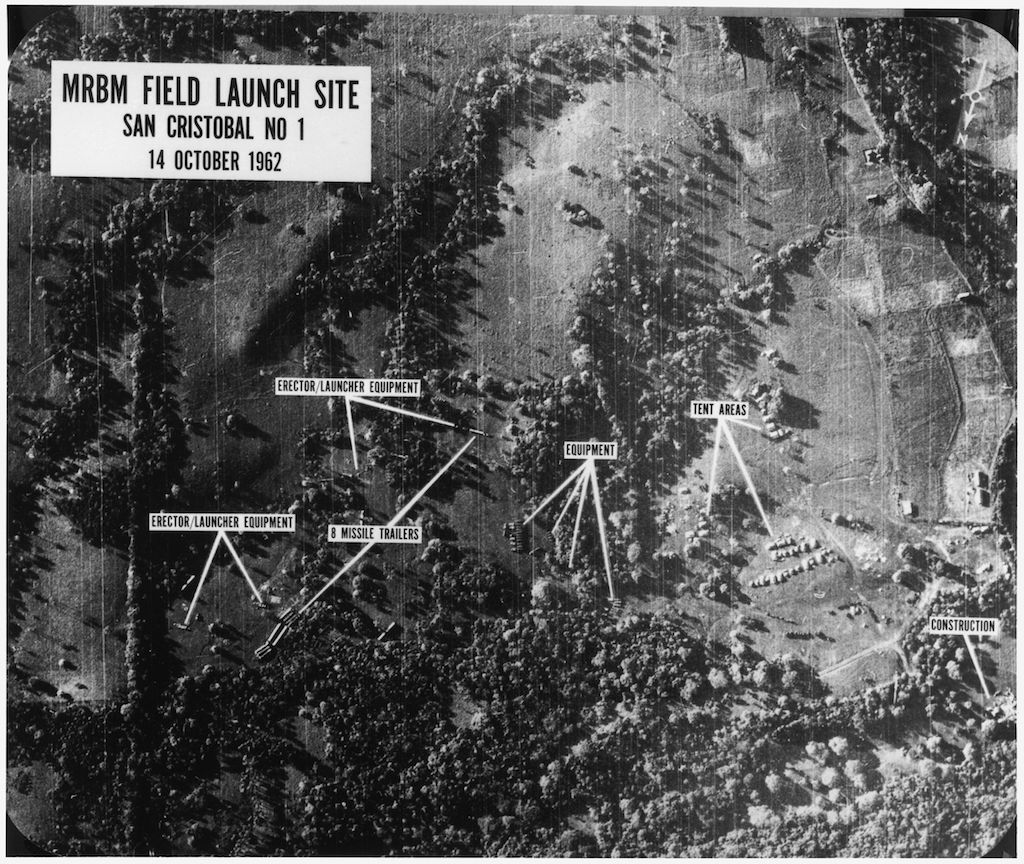 Why did the Soviet Union place missiles in Cuba? And why didn’t they hide them? They were well aware of U-2 reconnaissance flights over the island.

Like many of you, I still am wondering why on earth Nikita Khruschev thought it would be a good idea to put missiles in Cuba, just 90 miles away from the American mainland.

The book employs three explanatory models to explore the crisis: a rational actor or classical model; an organizational process model; and a governmental politics model.  My focus was on the ‘rational actor’ because it presented the most information on my overarching question: Why did the Soviet Union place missiles in Cuba?

The model presents five possibilities or hypotheses that I’m going to pass on to you. But first, here’s some context (and a selected timeline) on what’s been called “the finest hour of John F. Kennedy’s presidency.”

Context and Timeline Leading Up to the Cuban Missile Crisis

Throughout 1962, in the midst of the Cold War, the movement of Soviet personnel and equipment to Cuba aroused suspicions in the American intelligence community. In response, U.S. ships and planes began photographing every Cuba-bound Soviet vessel, and U-2 spy planes began regular reconnaissance flights over the island, just 90 miles off the coast of Florida.

September 4, 1962: Soviet Ambassador Dobrynin presents Attorney General Robert F. Kennedy with a confidential message from Chairman Khruschev. In the message, Khruschev promises that the Soviet Union will create no trouble for the United States during the coming election campaign.

President Kennedy responds that same day, warning that “the introduction of offensive missiles into Cuba would raise the gravest issue.”

September 6, 1962:  Dobrynin requests an urgent meeting with Special Counsel to the President Theodore Sorenson. He delivers a second personal message from Khruschev to Kennedy:

Nothing will be undertaken before the American Congressional elections that could complicate the international situation or aggravate the tension in the relations between our two countries . . . The Chairman does not wish to become involved in your internal affairs.

When Sorenson challenges the sincerity of this message, he is assured that the Soviets are doing nothing new in Cuba.

George Bolshakov, a Soviet official with a relationship to Bobby Kennedy, relays another message, asserting that “No missile capable of reaching the United States would be placed in Cuba.”

September 11, 1962: Tass, the Russian news agency, is authorized to reiterate the Soviet government’s policy on the transfer of nuclear weapons to third nations:

September 13, 1962: The President makes a major public statement on a Communist build-up in Cuba saying:

[if Cuba should] “become an offensive military base of significant capacity for the Soviet Union, then this country will do whatever must be done to protect its own security and that of its allies.

September 19, 1962: The United States Intelligence Board (USIB) approves the September National Intelligence Estimate that concludes that Soviet emplacement of missiles in Cuba is highly unlikely.

October 13, 1962: When questioned by Chester Bowles about the presence of Soviet “offensive weapons” in Cuba, Dobrynin emphatically denies any such possibility.

October 14, 1962: The US discovers Soviet offensive missiles in Cuba.

October 16, 1962: The Executive Committee of the National Security Council meets and discusses 5 alternative hypotheses, focusing on:

Five Hypotheses for the Emplacement of Missiles in Cuba

This hypothesis centers on Berlin, and imagines that the Soviets intended the missiles in Cuba to serve as a lightning rod. It goes something like this. If the US struck “little Cuba,” NATO would split, and Latin America would become rabidly anti-American. While the US was dealing with a public relations nightmare, the Soviets would make a strong move against Berlin. Think Suez and a second Hungary.

Although the Bay of Pigs was unsuccessful, it proved that the US could act. If  Kennedy decided to send in the Marines, Castro’s defeat was certain. The Soviet Union was so far away that it couldn’t provide enough conventional support to make a difference. If there was a significant probability of US action against Cuba, the Soviets had to act first in order to deter it. The missiles in Cuba were an answer to this threat.

Khruschev believed that the American people were “too liberal to fight,” but to demonstrate this he needed a fait accompli. He thought that “when confronted with operational missiles, the United States would react indecisively. . . . By unmasking an irresolute America, the Soviet Union would drastically reduce the credibility of U.S. commitments to other nations.” A victory in this instance would show that the tide in the Cold War had turned.

At the time of the crisis it was widely understood that the US held strategic  superiority over the Soviet Union. Thus, the Cuban missile deployment was a bold effort to show the world that the Soviet Union was not strategically inferior to the US in the realm of missile defense. In reality, there was a gap, and it could only be closed if the Soviets made considerable expenditures. Turning Cuba into a missile launcher that could strike the United States was perceived to be an inexpensive solution to a major problem.

(If you’re intrigued and would like a more in-depth discussion, including the pros and cons of each hypothesis, consult Essence of Decision.)

Which hypothesis do you buy into? Have you already made up your mind?

. . . the introduction of strategic missiles into Cuba was motivated chiefly by the Soviet leaders’ desire to overcome . . . the existing large margin of United States strategic superiority. (Rand sovietologists Arnold Horeleck and Myron Rush.)

Not convinced? You can read the pros and cons of each hypothesis in Essence of Decision.

Those of you who like your reading to be lighter fare might enjoy Thirteen Days by Robert Kennedy or One Minute to Midnight by Michael Dobbs.  Of course you can always just make some popcorn and watch the movie Thirteen Days with Kevin Costner.

(As always, if you buy something on one of our Amazon links, CWS will receive a small bonus. Your price will not increase.)

For a trove of photographs go to the National Security Archives at George Washington University. Just click here.

In the early stages of the Cuban missile crisis, this photograph showed that the Soviet Union was amassing offensive ballistic missiles in Cuba. It’s of Medium Range Ballistic Missile (MRBM) Launch Site Number 1 at San Cristobal, Cuba, and was taken on October 14, 1962.The photograph highlights launch equipment and missile trailers, proving that the Soviet Union was building offensive nuclear missile bases in Cuba.

(1) My edition of  Essence of Decision is copyright 1971. There’s also a newer, updated edition by Graham Allison and Philip Zelikow, published in 1999. I haven’t read the new edition.