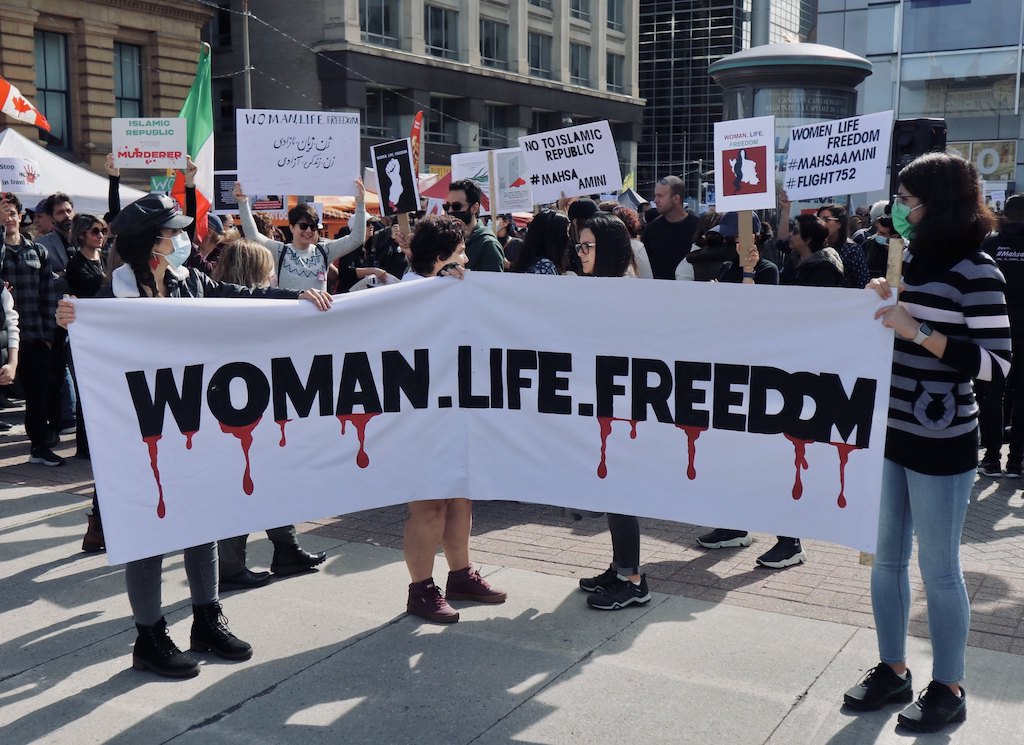 The hijab controversy surrounding the death of Masha Amina while in the custody of Iran’s Morality Police has spurred debate and protest, not just in Iran, but all over the world.

I’m certainly not an expert on the ins and outs of Islamic dress, especially when it comes to legalities surrounding veiling or head covering in today’s Iran, but I do have some limited experience in buying and wearing a chador in that country in the 1970’s.

In case you don’t know, a chador is a large piece of fabric that wraps around the body to serve as a combination head covering, veil, and full length shawl, covering the wearer’s entire body from top to toe.

Under the late shah, Mohammad Reza Pahlavi, the chador and today’s hijab were optional. Today, though, their wearing is mandated.

In this post, I’d like to share some personal reflections with you.  and then talk about the current situation in Iran as it relates to the ‘morality police’, improper hijab, and the death of Masha Amini.

I lived and worked in Iran in the mid 1970s  when women were free to dress as they pleased.  Many were religious and wore chadors or hijab. I almost always stuck to the wardrobe I’d brought from the states, but I did buy a chador to wear when visiting religious sites.

The covering I picked out was of an almost see-through material — not as thin as gauze or as stiff as voile; black with little red and white flowers. I still have it in the trunk in my living room. I thought it was rather fashionable, but I didn’t think it made me look pretty, like it did some of the Iranian women I’ve envied.

When I was shopping for my own garment, I was told that lower class, traditionally  religious women, usually wore all black chadors. The more affluent, but still religious, also wore black, but distinguished themselves by selecting a more costly, higher quality fabric. More upscale fashionable women wore brightly colored garb, and those who were secular wore Western dress. Now, of course, women — regardless of class — are required to cover themselves. But instead of the chador, many now wear hijab, black scarves and long dark raincoats even in 105 degree weather.

As I said, I’m definitely not an authority on Islamic dress code, but I’ve read that the Koran doesn’t legislate veiling, that this was a practice existing in the Byzantine and Sassanian Empires when veiling and seclusion were customs of the well-to-do urban classes.  In those times, the habit didn’t extend to the majority of women, but later the practice spread to Muslim Arabs and, once it did, two vague Quranic verses were interpreted to sanction its wearing. (Keddie: Roots of Revolution 13-14)

Some say wearing a chador is protective, not restrictive, and I respect those who choose to cover themselves whether out of religious conviction, modesty, or a desire to be culturally authentic. For me, though, wearing a chador was always difficult, sort of like trying out contact lenses. I could never get those to work either.

Because wearing my chador was always a challenge for me, I only put it on when I wanted to enter the most sacred of places. I struggled to position it correctly, couldn’t keep it in place, and tripped constantly while wearing it. I felt so awkward that I was constantly looking around to see who was snickering at me.

Despite multiple wearings, I never did learn how to get the darn thing to stay in place, and I could never imagine how Iranian women who looked so poised in their chadors managed the bathroom. I was in awe of those who were able to wear their chadors with grace and dignity, but, taking this a step beyond the bathroom, how on earth did they manage to hold their babies or even bags of groceries?

In early 1936, the first shah of Iran, Reza Shah Pahlavi, issued a decree banning all Islamic veils (including headscarf and chador), an edict that was swiftly and forcefully implemented. This move met with opposition from the religious establishment.

The son of Reza Khan, Mohammad Reza Shah, was in power from September 16, 1941, until his overthrow by the Iranian Revolution on February 11, 1979. During his reign, he decreed that women could choose whether or not to wear a veil. The chador or hijab was widely worn, but many women also chose to don Western-style clothes, including tight-fitting jeans, miniskirts and short-sleeved tops as seen in the photo below of Teheran University 1971.

When the Islamic government came to power in Spring 1979, Iran’s revolutionary leader, the Ayatollah Khomeini, began urging women to adhere to an Islamic dress code that required all women to wear the hijab.

According to Hamideh Sedghi, an American  political scientist:

Mandatory veil wearing was borne out of a desire to establish an anti-Western societal order in Iran. Iranian women defying the rule were subsequently branded “Western whores.”

In 1983, Khomeini’s recommended dress code became law when Parliament decided that women who do not cover their hair in public would be punished with 74 lashes. Since 1995, unveiled women can also be imprisoned for up to 60 days.

Not all women in Iran opt to wear the black chador, a cloak that covers the body from head to toe and only leaves the face exposed. Many prefer to wear loosely fitted headscarves and coats.

Baroness Haleh Afshar, a professor of women’s studies at the University of York who grew up in Iran in the 1960s says:

The real question is how far back do you push your scarf? Women have their own small acts of resistance and often try as far as possible to push their scarves back.

You can read more here.

Ayatollah Safi Golpayegani, an Iranian Grand Ayatollah, expressed disappointment in women who opt to dress fashionably and revealingly. He referred to the “hip” version of Iranian women’s wear as

covering skin and concealing private parts as it should, but [falling] short of true coverage … and on the verge of being defined as haram or forbidden.

Golpayegani went on to recommend the chador as the best choice of coverage, repeating what many Iranian officials have said over the years. His mindset is revealed in the famous phrase describing the veil:

In Farsi, the word chador means “tent,” and the name implies the head-to-toe coverage the garment provides. A woman who wears a chador is referred to as chadori.

. . . since hijab is mandatory in Iran, less coverage is interpreted as resisting the regime. And that’s why all hell breaks loose when it comes to women’s hijab.

Though the regime is all for the chador, most people are not, and even the less restrictive hijab has spurred protests.

Timeline of protests against Hijab in Iran

(The information above can be found on republicworld.com.)

The Death of Masha Amini

I’m sure you’ve read about the widespread public anger over the recent death of Masha Amini, a 22-year-old Iranian woman. She was arrested by Iran’s ‘morality police’ at a Tehran subway station on September 13, 2022. Her offense: wearing “improper” hijab – an Islamic headscarf which Iranian women must wear by law. Three days after her incarceration Masha collapsed and died. While Iranian authorities claim she had a fatal heart attack, her family insists that she was perfectly healthy.

Worldwide protests erupted shortly after the announcement of her death hit the media, but it’s thought that they will have little impact on Iran’s leadership. The regime is now cracking down on the protests, and internet access has been restricted.

The current protests are now believed to be the most serious challenge Iran’s government has confronted since the Green Movement protests in 2009. A series of challenges facing the Iranian regime—widening frustration over social restrictions; outrage over economic collapse and mismanagement; and seething anger at Khamenei and a clerical establishment that has shown little regard for the needs of the people—have now converged into a crisis of legitimacy for the Islamic Republic.

Only time will tell if Vakil is correct.

Want to know more about Iran’s government and what the future might hold? Read this article in Foreign Affairs.

Click here for a brief (YouTube) history of the hijab in Iran. It’s out of date, but informative.

As Women In Iran Fight Against Hijab, Know About History Of Headscarf Protests Since 2008

If you really want to be knowledgeable, take a look at The Veiling Issue in 20th Century Iran in Fashion and Society, Religion, and Government. You can download the 31 page pdf here.

The Artists Amplifying the Voices of Iran’s Protesters