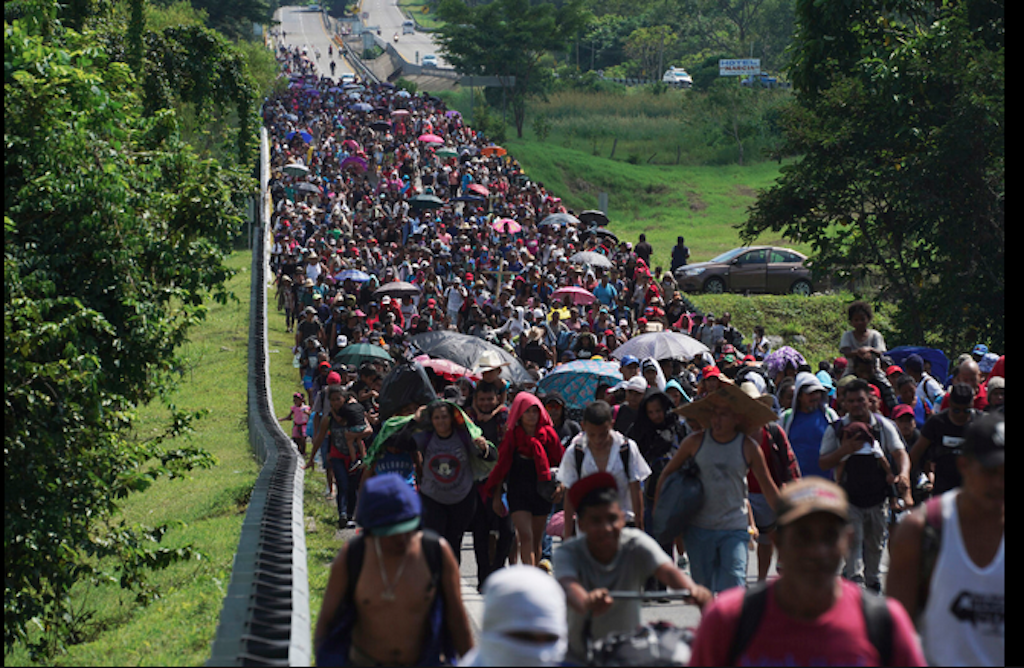 If you keep up with the news, I’m sure you’re aware of the global movement of displaced people fleeing their home countries.

But did you know that, according to the United Nations, in June of 2022, one in 78 people across the world were considered displaced?

According to the New York Times, Syrians are the largest group of displaced people while Venezuelans are estimated to be the second-largest group.

The historic pace of undocumented immigrants entering the United States has continued even though the number of removals over the past year — more than 1.3 million — was more than any previous year.

However, the demographics of those immigrating has changed. The number of undocumented immigrants from Mexico, El Salvador, Guatemala and Honduras is down 43 percent from August 2021 while the number of Cubans, Nicaraguans and Venezuelans is up 175 percent.

According to Chris Magnus, US Commissioner of Customs and Border Protection:

Failing Communist regimes in Venezuela, Nicaragua and Cuba are driving a new wave of migration across the Western Hemisphere, including the recent increase in encounters at the southwest U.S. border . . .

Many of the immigrants are seeking asylum. (For more on the asylum issue read this  NYTimes Opinion piece.)

[Much of the information in the rest of this post is drawn from the work of the Center for Democracy in the Americas. I highly recommend their weekly email on Cuba titled U.S. – Cuba News Brief. Their recent interview with Julio Antonio Fernández Estrada, Visiting Scholar at the Cuba Studies Program at the David Rockefeller Center for Latin American Studies, and Denisse Delgado Vázquez, Doctoral Candidate in Public Policy at the University of Massachusetts, Boston, has also been useful. In the interview, they articulate their thoughts on recent trends in Cuban emigration, the possible causes of the record-breaking migration, what makes this current migratory wave distinct, and the role that U.S. policy plays in Cuban migration here. I quote them frequently in the post. Click here to read the interview. It’s available in Spanish here.]

So far in Fiscal Year 2022, over one percent of Cuba’s population has left the island.

More than 177,800 Cubans have arrived in the United States according to information provided by US Customs and Border Protection. This is the largest migration surge in recent decades, surpassing both the 1980 Mariel Exodus (125,000) and the 1994 Balsero Crisis (30,900).

Source: Elaborated by CDA with data from the U.S. Customs and Border Protection (CBP)

There have been 662 encounters with unaccompanied Cuban minors at the US southern border since October 2021, which is a 1969% increase from the previous fiscal year.

The increase in unaccompanied minors is a symptom of the deteriorating living conditions found on the island.

Source: Elaborated by CDA with data from the U.S. Coast Guard (USCG)

In 1980, with the opening of the maritime bridge between the Cuban port of Mariel and Key West (Florida), Cuban exiles in the United States sailed to Cuba to pick up their relatives. In addition, Cuban officials put other people they considered a problem for Cuban society on these ships, including prisoners and psychiatric patients. This introduced greater diversity to the migratory flow, since in comparison to previous waves of migration, the Mariel Exodus was composed of a more racially and economically diverse population, whose educational level was lower.

The Balsero Crisis, unlike the Mariel Exodus, occurred in a context of deep economic crisis, after the fall of the Socialist bloc during which the Cuban people were affected by the paralysis of transportation by experiencing food and medicine shortages. The migration of the rafters (balseros, in Spanish) takes place by sea, like the Mariel, but the route is much more dangerous.

The “balseros” left in rustic boats that they built themselves.

The “balseros” were predominantly urban men who went alone, without their families, were younger than the general Cuban population, and had varying levels of education. They left mainly for economic reasons, although there were also political reasons.

Cuba is currently in the midst of its worst economic crisis since the collapse of the Soviet Union in the 1990s as it faces record high inflation rates and a severe shortage of foreign currency. Contributory factors include a decline in tourism and exports associated with the COVID-19 pandemic, as well as a reduction in remittances related to US policy.

Unlike the Mariel Exodus and the Balsero Crisis, the routes of the recent migratory outburst are more diverse, as they include maritime, air, and land routes. Particularly, border crossings between Mexico and the United States have increased, and Cubans have joined the irregular migratory caravans of Latin American migrants. It is a highly risky migration, like the Balsero Crisis, but where there is a greater presence of families migrating together, including more vulnerable members, such as children, the elderly and people with medical conditions.

Because of more widespread communication via the internet and social media, the structural crisis of the Cuban economy, political system, and society is now perceived with more anguish, desperation, and hopelessness than before.

Previously, parents of the young people did not advise them to leave the country. Now, families now make emigration plans in which they even organize solo departures from Cuba for young people.

The Impact of Emigration on Cuba

Although irregular migration is racially diverse, Cuban migration is characterized by a greater presence of people who identify as white. Thus, remittances are received predominantly by white families living on the island, thereby reproducing economic inequalities that are intertwined within the island’s racial profile. It is important to mention that vulnerable or marginalized communities in Cuba have a greater presence of black and mestizo people.

For detailed information on demographics in Cuba, read this Cold War Studies Post. Aging and fertility decline are long-term trends, exacerbated further by the migration of young people and females.

The marginalized and vulnerable communities are in increasingly worse situations because their families don’t have the necessary resources to pay for plane tickets to Nicaragua, Guyana or other countries, embassy fees, the cost of human traffickers, etc. In these circumstances, when a family manages to get someone to leave the country, they do so at the cost of losing assets accumulated throughout their lives or getting into debt, often with loan sharks.

Denisse says (as noted before):

Cuban migration is characterized by a greater presence of people who identify as white. Thus, remittances are received predominantly by white families living on the island, thereby reproducing economic inequalities that are intertwined within the island’s racial profile. It is important to mention that vulnerable or marginalized communities in Cuba have a greater presence of black and mestizo people.

To conclude, seaborne migration from Cuba for Fiscal Year 2022 now totals more than for the past five years combined.

Eleven months into FY2022, Cuban migration to the US has eclipsed the Mariel Boatlift of 1980 and the Balsero Crisis of 1994 combined.

Cubans are less likely than other nationalities to make repeated attempts to enter the US because, at least so far, they are not subject to immediate expulsion.

So long as living conditions on the island remain untenable, migratory waves will continue.

If you’d like more information on Cuban migration today, take a look at the following: