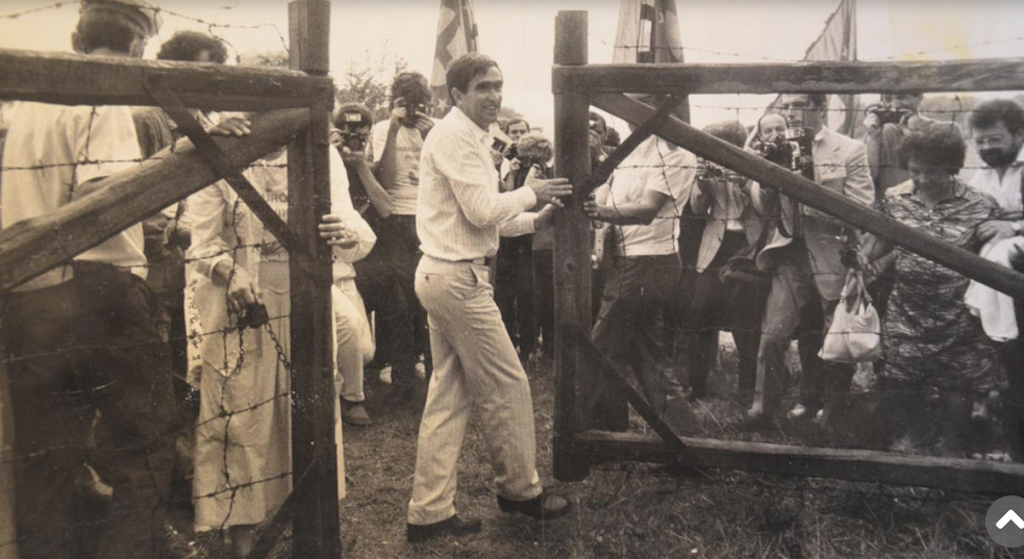 On August 19th, 1989, near the city of Sopron, Hungary, thousands of people called for an end to the cold war at an event dubbed the Pan-European “Freedom” Picnic. However, if you think the picnic is remembered because it was a highly organized event analogous to the highly publicized Dîners en Blanc ¹ so popular today, you would be wrong.

The gathering was intended as an informal meeting of Austrians and Hungarians at a border meadow.  It was arranged by members of the Hungarian Democratic Forum, one of the country’s emerging parties, with the backing of reform-minded communist minister Imre Pozsgay and the last crown prince of the Austrian empire and a member of the European Parliament Otto von Habsburg.  Miklós Németh, then Hungarian Prime Minister,  also promoted the idea.

The official emblem of the picnic was a pigeon breaking through the barbed wire, symbolizing permission to open the border station for three hours. The opening was granted so that pedestrians from both countries could experience Europe without borders.  Music and speeches were in the offing as was wine, beer, grilled food, and goulash.²

However, things didn’t go as organizers had planned. Gorbachev’s perestroika was in full swing, serving as a backdrop to the so-called ‘Sinatra Doctrine’ which allowed eastern bloc states to do things “their way” without fear of Red Army intervention. The Soviet government used the name jokingly to describe its policy of allowing neighboring Warsaw Pact states to determine their own internal affairs.

Interestingly, Paul Anka — not Sinatra — sang the song at Gorbachev’s 80th birthday celebration. You can watch his version below.

According to The Irish Times:

tens of thousands of East Germans had gathered [in parks and campsites] in Hungary – where “goulash communism” was softer than their own brutal police state – in the hope of finding a chink in the Iron Curtain through which they could escape to the West.

A border guard on the Hungarian-Austrian border is reported as saying:

Naturally we saw the picnic as potentially problematic. There were so many East Germans in Hungary looking for a way out, and the organizers of the picnic planned to open a border crossing for a few hours so the Hungarian and Austrian delegations could meet. I wondered how we would deal with it, if a situation arose.

. . .to open an old border gate that hadn’t been opened since 1948, and the slogan we put on leaflets for the picnic was ‘Break it and take it’ – we wanted people to cut bits of the border fence and take it away, recalled Laszlo Magas, one of the chief organisers . . . We thought a lot of Hungarians and Austrians would come because everyone hated the Iron Curtain, but we didn’t expect anything to happen with the East Germans.

It was soon evident that the plan wasn’t going to hold. As hundreds of East Germans neared the border posts, the guard in command decided that “in order to avoid a catastrophe” he would let them through. The Hungarian border guards were ordered to only deal with arrivals from Austria, not with those leaving. Consequently, more than 600 East Germans crossed peacefully into Austria that day.

It’s interesting to note that there is now a fence marking Hungary’s southern boundary. Organizers of the picnic approve of today’s fence, rejecting suggestions that current policies betray the spirit of 1989 and its fight for democracy.

The difference lies in who built the fence, and why, says Ferenc Ivanics, a member of Orban’s Fidesz party since 1988 and a former deputy. . . . In 1989, that fence was a prison and an iron curtain. The fence we have now gives us the protection of our own territory.

What do you think? Post your thoughts in the comments.

__________________________________________________________
¹Per Wikipedia, Dîner en Blanc (“Dinner in White” in French) is a worldwide event spanning six continents in which people have a meal dressed in white in a temporary dining setup in a public space. Diners are required to provide their own food, tables, chairs and tablecloths. Only a select number of participants who have previously signed up are made privy to the location the day of the dinner, and generally converge in an iconic urban location.

Click here for a recipe for Traditional Hungarian Goulash.

The wine was called Bull’s Blood. You can read all about it here.