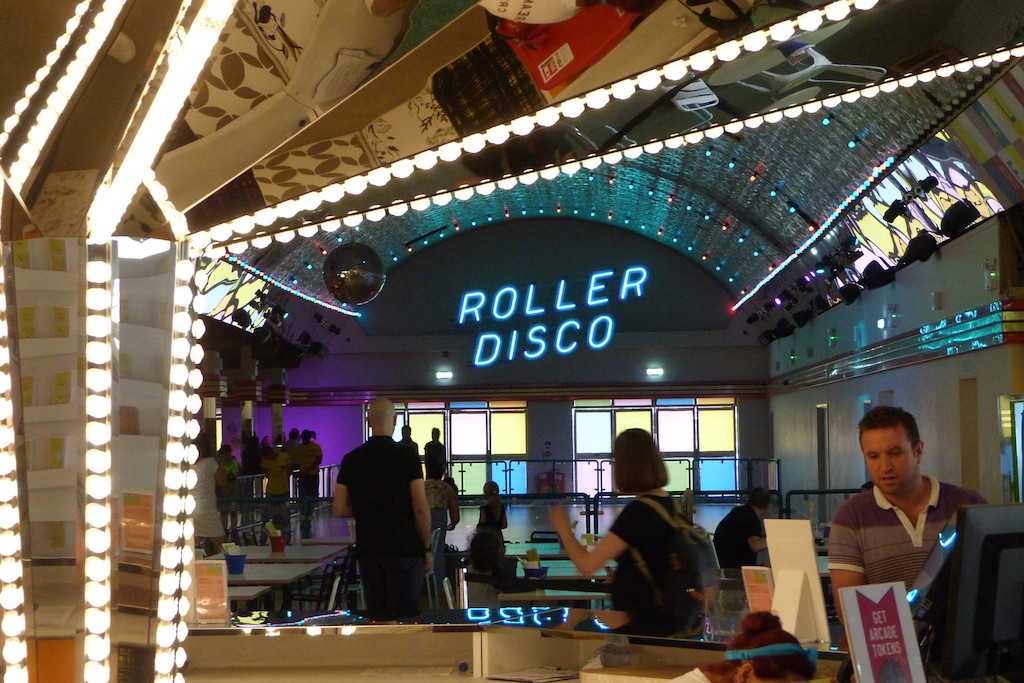 Staying home this summer? Not ready for a Cold War Road Trip and not interested in the Berlin Wall Trail Virtual Challenge? Well, no worries, you can still have a lot of fun. Think about a Retro/Throwback Summer, specifically a look back at roller disco from the 1970s.

It’s been argued that the 1970s marked a period of trauma and healing. Well, we could certainly use a bit of fun and healing now!!

In the 70s,  Watergate and the Vietnam War undermined the nation’s sense of purpose in the world and inspired a search for moral renewal. In this summer of 2022, we’re undermined by a lingering pandemic and deep partisan division.

Here’s what flashbak.com has to say about the 1970s:

there is nothing more quintessentially Seventies than the roller skating/roller disco phenomenon that swept the US in the latter half of the decade.  It had it all: gaudy styles, godawful music, and an air of uninhibited sexuality that made the whole mad affair seem a bit seedy.

Roller skating was a major phenomenon in the 1970s, with disco nights at roller rinks, movies about the sport, and even a song by Cher becoming part of popular culture.

But while gliding around on classic skates might bring to mind images of vintage fashion — think bellbottoms, paisley prints, and high-waisted jeans — this retro sport is now making a very modern comeback.

The roller disco craze of the 1970s is sweeping the world now. From Berlin to  Los Angeles, the UK to New York City, the trend is more than a passing phase. It started in the summer of 2020 as a trendy lockdown hobby and it’s still gathering steam. If you look at it in the context of the pandemic, it’s not hard to understand why. Here are a few reasons:

The Return of Disco Roller Skating

I live in NYC and disco skating is taking the town by storm. Flipper’s Roller Boogie Palace, a famous family owned and operated roller skating rink, is now at  Rockefeller Center, bringing the magic of the 1970s with it. And just a short distance away, DiscoOasis rules the night at the Wollman Ice Skating Rink in Central Park. It’s promoted as an

immersive, funky, roller-disco experience . . .  [where you can] “roller skate to the sounds of 70s era disco curated by Groovemaster Nile Rodgers, tear up the rink-side dance floor under dazzling lights, explore interactive art installations and more!

Grown-ups had their discos, bars and pool halls, but the children of the 70s had the roller skating rink. They were around long before the 70s — in the 50s and 60s they were often enormous and featured live organ music. In the 70s, they metamorphosed into a disco themed haven with everything a teen could want — loud music, pinball, poor lighting, and an equal measure of girls and boys.

Moreover, roller skating’s roots in the African American community have always been strong. During the Civil Rights Movement in the 1960s, black skaters protested the racial segregation of roller rinks in the states, while years later roller rinks became community spaces that helped give rise to hip-hop artists. The 2018 HBO documentary United Skates is said to be “a cinematic love letter to Black roller rink culture.” (You can watch United Skates on HBO Max.)

More recently, roller skating has been linked to the Black Lives Matter (BLM) movement as skaters in the US organized solidarity meet-ups in skating venues. The 2020 YouTube video below documents a peaceful protest against police brutality in Santa Barbara.

Roller Disco and Communist Control in the Soviet Union and China

It’s important to note that roller skating hasn’t just been popular in North America. It’s enjoyed worldwide popularity. In fact, during the Cold War, Soviet officials saw disco as a way to deal with dissatisfied youth.

Formal disco clubs opened throughout the Soviet Union in the early 1970s. Soviet officials thought disco was ‘safe’, not something expressively political like Bob Dylan‘s work or something to be feared like rock ‘n roll.

While Soviet officials approved of disco’s rise in popularity, though, they supported the playing of Soviet artists rather than the hits of Donna Summer and the Bee Gees. Still, Western disco wasn’t banned.

Similar to the Komsomol’s control of discos in the Soviet Union, the Communist Party in the People’s Republic of China also embraced disco after the genre’s fall from popularity in the mid 1980s. Although banned during Chairman Mao’s culture revolution in the late 1960s, dance was being embraced by the 1980s, mainly due to the fact that the music was a way to gain favor with Chinese youth and that the Chinese government saw disco dancing as an African folk dance. . . . Disco in communist China transcended generational barriers . . .

The Roller Movie Trinity may be right for you. The three movies are Skatetown U.S.A., Roller Boogie, and Olivia Newton -John’s Xanadu. Which one is the best is still hotly debated.

Finally, you might want to tune in to Cold War Study’s Roller Disco playlist or take a listen below!