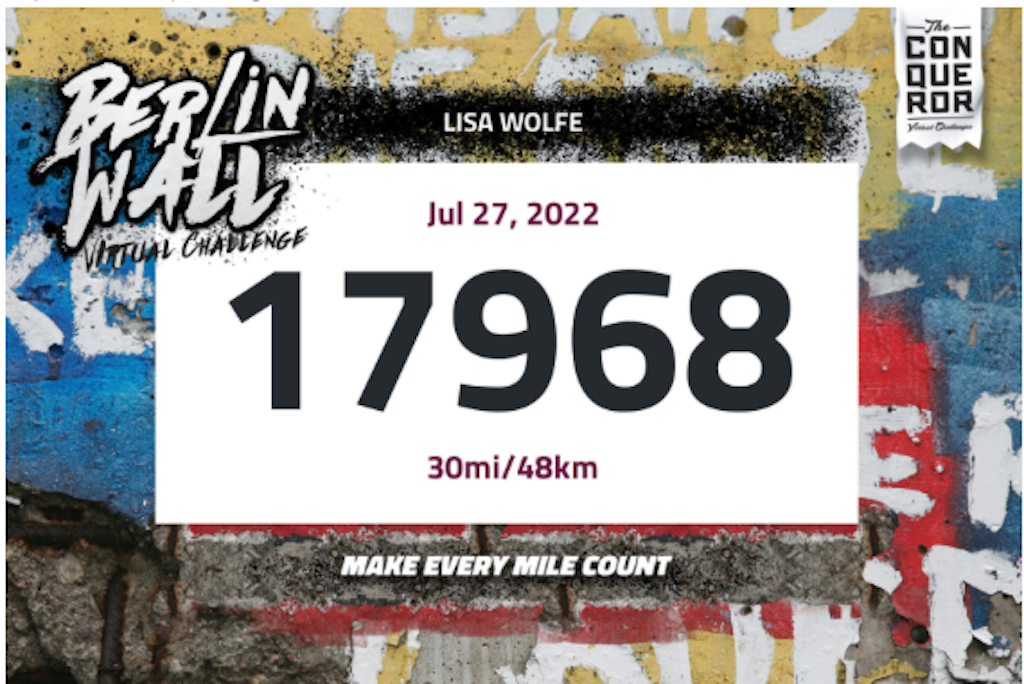 Travel isn’t in the cards for me this summer, so I’m doing a Berlin Wall Trail Virtual (Walking) Challenge as my staycation getaway. I’ll give you all the details a bit later in case some of you need a ‘staycation’ activity too. In short, though, if you finish the challenge you’ll get a finisher’s medal and a digital certificate of completion. And along the way, you’ll get virtual postcards and you’ll plant 5 real trees or recover 50 plastic bottles from the ocean – your choice!

The Berlin Wall Trail was completed in 2006 and runs along the original  borders that divided Berlin into two sectors. Storyboards of events are set along the route to provide insight into the rise and fall of the wall.

Even though Berlin, Germany’s capital city, was actually located in East Germany, it was divided also. The three western Allies held sway over West Berlin, and the Soviets controlled life in East Berlin.

Until August 1961, it was easy to move within the capital and around other areas of the country. People traveled across borders for education, work, or to visit family. In the summer of 1961, though, because West Germany was rebuilding quickly and East Germany was lagging behind, large numbers of East German professionals defected to the west. In the first six months of 1961 more than 300,000 individuals crossed over.

To stem the ‘brain drain’, the Soviets closed their borders. They laid more than 6,000 miles of barbed wire around West Berlin’s 96 mile perimeter. Concrete walls were built that same year, and more fortifications were constructed over the next 14 years. A secondary wall was built about 328 feet from the first one. The gap between the two walls was known as the ‘death strip’.

Many deaths occurred along the trail I’m walking now, nearly half in the first five years of the Wall’s existence. Sixty percent of those who perished were in their early 20s, just hoping for a better life. As one couple said:

All we want is to live our own lives the way we would like . . . Should our plan fail, [we] are going to depart this life . . . Death is then the best solution.

All sorts of escape were attempted. There were  attempts to climb the walls surrounding the ‘death strip’,  swim the Spree River, and ram through the borders in automobiles.

Because of tightened border controls and enhanced fortifications, the number of escapees dropped significantly by the late 1960s even though escape attempts continued. Night Crossing, a 1982 film, is based on the true story of two families who escaped East Germany in a home made hot air balloon in 1979. You can stream the movie on Prime Video.

The journey begins at Waltersdorfer Chausse,a border crossing for West Berliners/Germans heading to Schonefeld Airport in East Germany. The airport was the site of a daring escape by a couple who hijacked a domestic flight and tried to force the crew to fly to West Germany. The plan failed and the couple killed themselves, but according to the trail’s description “stories of bold escapes and failed attempts” will continue to unfold all along the trail.

After the fall of the Wall, a section was preserved and turned into an open-air gallery 4,300 feet long. In 1990, a group of artists from 21 countries were invited to paint the wall with 106 works of art. “The other side of the wall was repainted white, restoring it to its pre 1989 condition when the colour, casting shadows of potential escapees, was supposed to alert border guards on watch. After much vandalism, the Wall was restored in 2009 and is now a historical monument and the longest outdoor gallery in the world.

Today the gallery hosts more than 800,000 visitors a year, a reminder of freedom regained.

Want to Participate? Here’s How

The challenge is sponsored by The Conqueror Events. Click here to learn all the details and to sign up. There is a small fee, but Conqueror will plant a tree or stop 10 bottles from entering the ocean for every 20% of the challenge you complete. There’s no time limit that I’m aware of.  And you get a really neat medal when you finish!  I’ve completed six of their challenges so far, and I’ve had to extend my time often with no problems.

I hope some of you will decide to join me. If you do, put a note in the comments and I’ll set up a team for our group. Whether you join or not, I hope your summer is full of adventure and accomplishment. Happy traveling!!

All photographs are courtesy of The Conqueror Events with the exception of the ‘death strip’. It’s by Felipe Tofanin (Flickr).