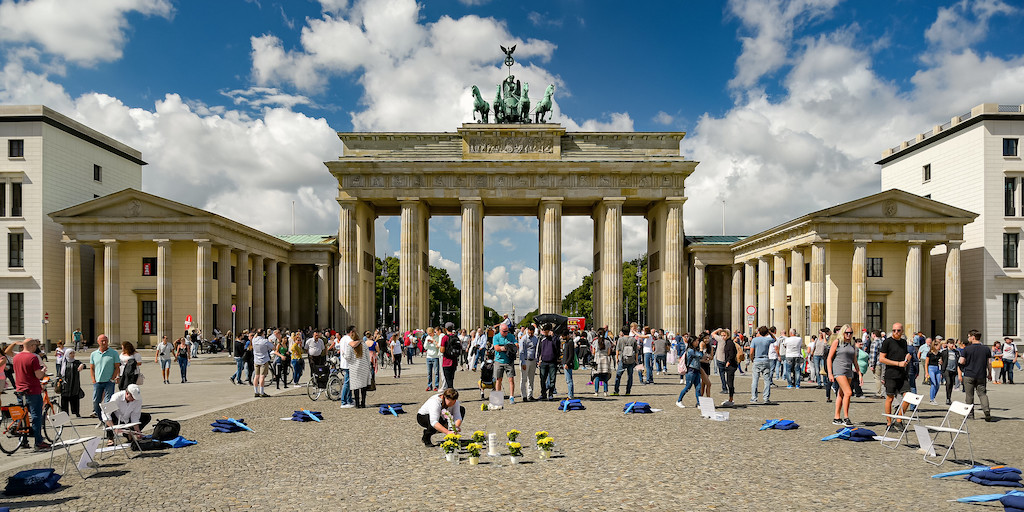 1990 was an event filled year, culminating in the unification of East and West Germany, and the eastward expansion of NATO. Some of you may have been following the debate between those who feel Putin was threatened by NATO’s expansion and those who say the enlargement of NATO served as a deterrence to Putin’s ambitions.

An argument in favor of further NATO expansion was published by Brookings in 1997. You can read Enlarging NATO: A Questionable Idea Whose Time Has Come here.   The article (by Richard Haas) lays out the pros and cons of expansion and concludes that “. . . the right answer may be qualified, even wistful, but it is “yes” nonetheless.”

Perhaps the most vocal proponent of the more provocative direct threat argument, John Mearsheimer is a distinguished professor in the political science department at the University of Chicago, and has been described as the most influential realist of his generation. He’s known as  one of the most famous critics of American foreign policy since the end of the Cold War, and his lectures  on You Tube regularly see over a million viewers. Here’s a link to his 2014 lecture titled Why is Ukraine the West’s Fault?

Which view do you favor?  Perhaps this fact based timeline will provide more context. Want to start at the beginning? Read our first post on The End of the Cold War here.  Then come back for a follow-up.

April 4, 1949: The North Atlantic Treaty Organization (NATO) Pact, was signed on April 4, 1949. Its underlying premise was that European defense could not be entrusted to the United Nations.

NATO, therefore, was designed to “create not merely a balance of power, but a preponderance of power” to deal with the Russians from “positions of strength.”

Twelve nations signed the pact including the US, Canada, Denmark, France, Iceland, Italy, Portugal, Norway, Great Britain, and the Benelux. These nations pledged to use force only in self-defense and to develop “free institutions,” particularly through the encouragement of “economic collaboration between any or all” of the parties.

Article 5 of the agreement was central. It stated:

The parties agree that an armed attack against one or more of them in Europe or North America shall be considered an attack against them all, and consequently they agree that, if such an armed attack occurs, each of them . . . will assist the Party or Parties so attacked by taking forthwith, individually and in concert with the other Parties, such action as it deems necessary, including the use of armed force.

Article 11 modified this commitment by adding that the pact’s provisions “shall be carried out in accordance with each nation’s constitutional processes.’” $11.2 billion for European military aid was the immediate financial price for the NATO commitment.

Later in the month, the Soviet Union forms its own collective security alliance, the Warsaw Pact.

(NOTE: In the timeline below, NATO related activities will be italicized. The timeline draws on Not One Inch: America, Russia, and The Making of Post-Cold War Stalemate by M.E. Sarotte.)

1990: According to Robert Gates (Assistant to the US President and Deputy National Security Advisor), 1990 is marked by one overarching objective: to bribe the Soviets out of Germany.

the unification of Germany fully in NATO, meaning the extension of Article 5 to its eastern region . . . the fight for German unity and the fight for NATO’s future beyond the old inner-German dividing line became one and the same.

The United States advances proposals designed to make “unification in NATO” acceptable to Gorbachev. The idea is to give him something he can use to quiet his domestic critics.

The US is adamant that “NATO’s ability to extend Article 5 across all of Germany must not come at the cost of having to move nuclear weapons out of the country.”

Central and Eastern European leaders realize that Europe will remain divided between NATO and non-NATO states. They choose sides.

1990: Divided Germany has the highest concentration of nuclear arms per square mile of anywhere on the planet.

Winter 1990: The Soviet led order is disintegrating at home and abroad. Economic problems lead to widespread misery in the USSR.

Discontent and strike threats are so severe that Gorbachev announces the cancellation of all foreign commitments so that he can focus on domestic problems.

January 23, 1990: Prime Minister Miklos Nemeth of Hungary announces Moscow’s pullback of all troops in his country. The actual withdrawal begins in March 1990, with the last troops withdrawn on June 19, 1991.

February 1990: Chancellor Kohl of West Germany agrees to go to Moscow for bilateral negotiations with the Soviets. He doesn’t inform Washington.

With the Wall gone, the East German economy is crumbling.

The massive flow of Easterners to the West is causing overwhelming problems for West Germany.

March 7, 1990: Speaking to an interviewer, Gorbachev absolutely rules out membership for a united Germany in NATO.

March 18, 1990: With more than 93 percent voter participation overall,  an election in East Germany is a game changer.

According to the West German ambassador in Moscow, the voting results make clear to the Soviets that

the political system of the German Democratic Republic (GDR), which they had built up over decades, had no democratic legitimacy.

March 21, 1990: The Polish foreign minister pays a visit to NATO headquarters, spurring a sequence of contacts between alliance leaders and Central and Eastern European representatives.

March 23-24, 1990: A number of Central and Eastern European foreign ministers take part in a special European Community (EC) ministerial meeting in Lisbon. They want to see what forms of Western affiliation might be open to them.

the collapse of the Warsaw Pact was not a decisive issue for the Soviet Union. . . . It made no difference to them what Hungary, the Czechs, and possibly even the Poles did.

East Germany, on the other hand, is a different  matter.

May 1990: Boris Yeltsin becomes the elected leader of the Russian republic.

May 18, 1990: In a meeting with US Secretary of State James Baker, Gorbachev complains about his Warsaw Pact allies wanting to join NATO.

After the main session in DC, Gorbachev and Bush fly to Camp David by helicopter. The leaders discuss Germany, the future of Europe, and Moscow’s economic problems.

The Washington summit does not finalize German unification but Bush and his advisors succeed in getting Gorbachev to confirm that the future of European security will follow the Helsinki principle.

The Helsinki principle was granted to all signatories of the Helsinki Final Act of 1975 which said that all could choose their own military alliances. On paper, the Soviet Union is committed to this principle.

Per the Helsinki principle, the choice about NATO is up to Germany itself.

June 1990:  Upon his return home after the summit, Gorbachev is required to contend with Boris Yeltsin’s rise to prominence.

June 7, 1990: The Hungarian prime minister calls for the “immediate liquidation” of the Warsaw Pact’s military organization.

June 25, 1990: West Germany commits to pay 1.25 DM in “stationing costs” for Soviet troops in the second half of 1990. In other words, East Germany will continue to be occupied by the USSR even after the collapse of the Berlin Wall.

July 1990: Yeltsin announces that he is leaving the Communist Party.

July 1, 1990: German economic and monetary unification occur. This is well in advance of political unification.

July 2-14, 1990: The Congress of the Communist Party of the Soviet Union holds a meeting.

July 16, 1990: Gorbachev says he will allow German unity if NATO agrees that no nuclear weapons, and only German troops, can be stationed in East Germany after a Soviet withdrawal.

August 1990: Gorbachev raises the possibility that the Soviet Union might dissolve.

September 5, 1990: The US national security advisor, Brent Scowcroft, informs President Bush that “a major problem has arisen in the negotiations for a final settlement document on German unification.”

September 9, 1990: Bush meets Gorbachev in Helsinki for a brief summit to discuss the crisis in the Gulf.

September 13, 1990: Gorbachev asks US Secretary of State Baker for a no-interest credit of $1 to $1.2 billion. Baker suggests asking a third country instead of the US.

NATO’s full legal jurisdiction, including Article 5, is extended immediately to cover all of East Germany. The alliance has started its post-Cold War expansion to the east.

October 15, 1990: The Nobel Peace Prize is awarded to Gorbachev.

October 22, 1990: The US State Department produces an analysis of “Eastern Europe and NATO.” The main conclusion:

It is not in the best interest of NATO or the US that these states be granted full NATO membership and its security guarantees. . . the United States should expressly refrain from organizing an anti-Soviet coalition whose frontier is the Soviet border.

November 1990: Gorbachev signs a new treaty of friendship and cooperation with Germany.

November 7, 1990: Economic conditions within the USSR are terrible and discontent is high. Shots are fired at Gorbachev during the October Revolution Day Parade in Red Square.

November 19, 1990: Gorbachev attends the summit of the Conference on Security and Cooperation in Europe, hoping the CSCE will become the heart of a pan-European security system involving both Western and Eastern states. While there, he signs the Conventional Forces in Europe Treaty.

The treaty eliminates the Soviet Union’s advantage in conventional weapons in Europe.

End of 1990: The legal process of uniting East and West Germany concludes.