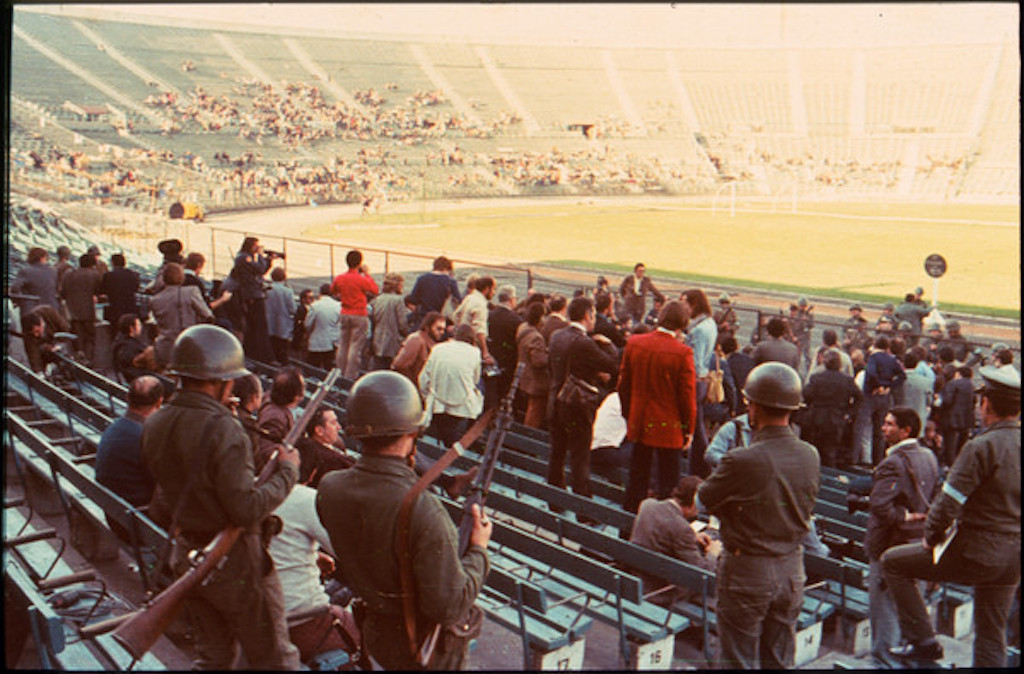 I’ve just finished reading Missing by Thomas Hauser.  First published in 1978, the book tells the gripping story of Charles Horman, a young American who disappeared shortly after Chile’s successful military coup on September 11, 1973. With CIA involvement, General Augusto Pinochet came to power, soon ordering the mass arrest of thousands of leftist dissidents and other suspected opponents. Based on real events, the book is most accurately  described as an exceptionally detailed work of creative non fiction.

After Horman vanishes, and unable to uncover satisfactory information from his home in New York, Horman’s father, Ed, a patriotic American businessman, travels to Santiago, Chile.  Officials in the American embassy there, led by the ambassador himself, offer to help him search for the son he believes has simply disappeared. The author goes on, however, to present evidence of the arrest and murder of Horman as well as proposing US involvement in the actual coup.

At the end of Missing, Ed Horman is left with three questions:

Unfortunately, Charles Horman’s experience was commonplace in the Southern Cone of the mid 1970s. “The disappeared,” as the missing and executed were most often called, can be counted in the thousands. Military regimes in Brazil, Paraguay, Uruguay, Chile, and Argentina rounded up those suspected of affiliations with leftist movements and put them in concentration camps and secret detention centers where they were tortured, interrogated, executed, and secretly buried.**

The Argentine armed forces set up their version of a bureaucratic authoritarian state in 1955. The military’s goals were:

Official policy also included a commitment to anti-communist repression. To counter the above forces, the Argentine military turned to brutality. Killing began in the late 1960s and escalated throughout the 1970s. The military responded with deathsquads that claimed the lives — or disappeared — at least 9,000 and, perhaps, as many as 30,000 people.

This anti-communist terror was officially called the Process of National Reorganization by the military junta that ruled Argentina from 1976 to 1983. More commonly known as the Dirty War, it was a comprehensive campaign aimed at eliminating communists and others seen as “subversives.”

You can read much more about military repression in Argentina in our post titled  Cold War Argentina: The Dirty War.

In September 1973, Chilean army tanks rolled into the streets of Santiago, removing the country’s democratically elected president, Salvador Allende, from office. The military dictatorship that claimed power governed by decree for the next 17 years.

The Chilean coup turned out to be the bloodiest coup in the history of Latin America. Thousands of supporters of the Popular Unity coalition were herded into the Santiago soccer stadium. As in Brazil, Argentina, and Uruguay, many of the detainees were subject to torture and murder, their bodies transported to mass graves.

The Chilean dictatorship was basically a bureaucratic-authoritarian regime, except that the leader of the 1973 coup, General Augusto Pinochet, had a leading role unparalleled in Brazil or Argentina. Chile had become the epitome of the Latin American trend toward military dictatorship.

You can read more about Chile in the post titled Cold War Chile. It’s Cold War Studies’ most popular post ever. And if you want more background on bureaucratic authoritarian regimes, read our post titled Bureaucratic Authoritarianism.

In April 1964, with the knowledge and collaboration of American officials, and with US naval support standing offshore, Brazilian generals seized control of their country. The new regime was intended to be transitory but it gradually became a full dictatorship, ruling Brazil undemocratically for the next twenty years.

Repression against opponents, including urban guerrillas, was harsh, but not as brutal as in other Latin American countries. Due to extraordinary economic growth, known as an “economic miracle,” the regime reached its highest level of popularity during the years of repression.

You can read more about this period of time in Brazil’s Military: Repression to Ruin or in Military Rule in Cold War Brazil.

Formed in 1964, the Tupamaro urban guerilla movement, was directly inspired by the example of the Cuban Revolution.

In 1967, the Uruguayan president declared martial law to fight the Tupamaros. The military began a gradual takeover which was completed in 1973. The Tupamaros were quickly cornered once torture penetrated their cover.

By the end of the 1970s, Uruguay had more political prisoners, relative to its size, than any other country in the world.

You can read more about this in our post titled Cold War Military Repression in Uruguay.

Many detainees who escaped their home countries to avoid detainment were located, captured, and interrogated through the efforts of Operation Condor, a multinational intelligence organization.

In an investigation of their country’s participation in Operation Condor, Brazilian authorities ordered the declassification of military documents.

The US government has also declassified many long-secret files, but the new information is also confirming a more active cooperation with repressive activity than has previously been acknowledged.

If you’d like to learn more about Operation Condor, you can check out a book by John Dinges, a Columbia University journalism professor. The Condor Years: How Pinochet and His Allies Brought Terrorism to Three Continents is highly rated, and available on Amazon. (As always, if you purchase the book or DVD through our affiliate link on Amazon, Cold War Studies receives a very small donation. Thank you.)

For those of you who would rather watch than read, you may want to stream The Judge and The General on YouTube. Some of you may find it very uncomfortable viewing for some, but it shows the work of the Chilean judge, Juan Guzmán, who investigated Pinochet. Guzmán had supported Pinochet’s 1973 coup, but in the end held the dictator accountable. One result: in May 2000 an appeals court stripped Pinochet of his immunity as a former president and senator. Before his death  in 2006, he faced more than 100 separate charges of ordering torture and disappearances.

Remember the three questions I listed at the beginning?

As Ed Horman discovered, answers are hard to come by, and readers may have different takes. My suggestion is that you find a copy of the book, read it, and decide for yourself. I bought my copy on Amazon. As the author concludes:

The line between United States involvement in the coup and responsibility for the death of Charles Horman is difficult to draw.

** I’m sure some of you who are familiar with the 1983 Oscar nominated film starring Jack Lemmon and Sissy Spacek are asking “why didn’t you just stream the movie?” Well, that’s what I wanted to do. Unfortunately, the film isn’t available for streaming in the US because of a libel suit filed back in the 1980s. Even though the libel action by three United States government officials was dismissed, the book was out of print for a period of time too. As I mentioned before, I picked up my copy on Amazon.

According to Wikipedia, “In 1983, a year after the film’s theatrical release, both the film (then in the home video market) and Thomas Hauser’s book The Execution of Charles Horman were removed from the United States market following a lawsuit filed against Costa-Gavras and Universal Pictures’s (then) parent company MCA by former ambassador Nathaniel Davis and two others for libel. A lawsuit against Hauser himself was dismissed because the statute of limitations had expired. Davis and his associates lost their lawsuit, after which the film was re-released by Universal in 2006 . . . . The film created significant controversy in Chile and was banned during Augusto Pinochet’s dictatorship, even though neither Chile nor Pinochet is ever mentioned by name (although the Chilean cities of Viña del Mar and Santiago are).”

If you’re a big spender, you can buy the DVD on Amazon. You can watch the original trailer below.