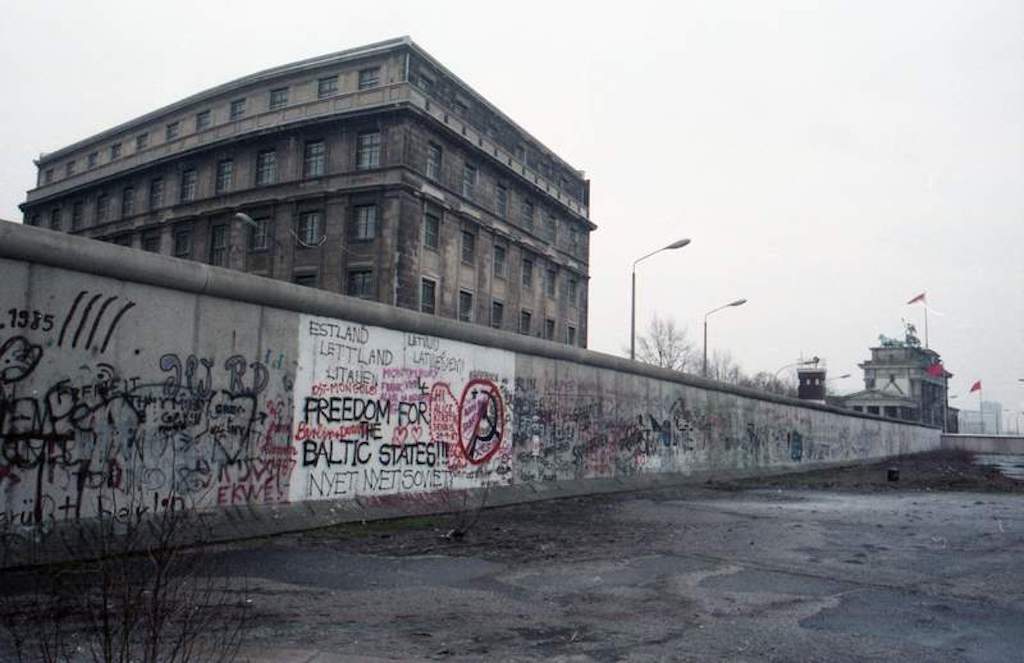 In today’s world, the years leading up to the end of the Cold War and the years following the destruction of the Berlin Wall have taken on renewed importance. How did the Cold War end? This timeline provides insight.

Note: This timeline is based primarily on two sources: CNN’s series The Cold War (specifically Episode 23,The Wall Comes Down), and Not One Inch: America, Russia, and The Making of Post-Cold War Stalemate by M.E. Sarotte.

1948: The American Congress approves a generous plan of economic aid to Europe.  (Originally proposed by Secretary of State George Marshall in June 1947.) Read our post M is for Marshall Plan if you’d like the details.

March 17, 1948: A new Western union — a precursor to  NATO — consisting of Britain, France, and the Benelux countries (Belgium, the Netherlands, and Luxembourg) comes into being with the Brussels Treaty of March 17, 1948. This in the wake of the de facto Soviet takeover of the Czechoslovak government.

June 11, 1948: The US Senate responds to the Brussels Treaty with the passage of the Vandenberg Resolution.

April 4, 1949: NATO comes into being when the US Senate votes 82 to 13 to ratify the Washington Treaty. The signing takes place in a ballroom in Washington DC.

Want to read more about the pact building process? Read our post P is for Pact Building.

Article 5 of NATO requires each member to consider an attack on any other member state’s territory as an attack on its own. Read more about Article 5 on the NATO website.

A North Atlantic Council (NAC) – composed of member states’ leaders or their representatives, presided over by a secretary general, is created to be the top policymaking body.

October 1949: The Communists in China prevail in the Chinese civil war.

September 9, 1950: US President Harry Truman announces that he is sending substantial ground forces back to Europe to serve under an integrated NATO command structure, but with a US general – Dwight D. Eisenhower.

1954: The Allies allow West Germany (along with Italy) to join the original 5-member Brussels pact and what is now called the Western European Union (WEU).

West Germany is also invited to join NATO, but with conditions. The Western powers preserve their right to keep troops stationed in their former occupation zones for  an unlimited time. West Germany also has to renounce the production of any “ABC” – atomic, biological, or chemical – weapons on its territory.  Also, the divided city of Berlin is to remain in a separate category.

1955: West Germany is brought into NATO. In response, Moscow forces the countries of Central and Eastern Europe to join an opposing military alliance known as the Warsaw Pact.

How Did The Cold War End?

December 1988: Gorbachev meets with both George H. W. Bush and Ronald Reagan. It’s agreed that the Cold War must end.

1989: Gorbachev is determined to loosen Soviet control over nations in the Communist Bloc. Although he tells the nations of Eastern Europe that they have the right to choose their own future, he believes that they will not ‘run away’ from Moscow.

1989: Soviet power in Europe unravels. There is a new mood in Moscow. The use of force is discredited, but the Berlin Wall remains in place.

March 1989: Hungarian leaders visit Moscow. They want Gorbachev to okay free multi-party elections, but he doesn’t agree. Soviet troops remain in Hungary, but Gorbachev promises not to use them to crush the citizenry.

Hungary takes down the barbed wire between its country and the West. The Iron Curtain is unraveling.

The Poles are also breaking with the Communist system.

June 1989: The Solidarity Movement in Poland wins 99 out of 100 seats in the elections. (Click here if you’d like to learn more about Solidarity.)

June 16, 1989:  The activist Viktor Orban gains world attention when he makes a passionate speech in Budapest’s Heroes Square. Orban is a spokesman for a group called the Federation of Young Democrats.

July 7-8, 1989: Warsaw Pact Summit in Bucharest. The Eastern Bloc is divided. East Germany and Romania are against reforms and want to intervene in Poland and Hungary.

In China, demonstrations in Tiananmen Square end in tragedy.

East Germany is rotting away. A police state, the pollution is overwhelming. The country blocks travel to Hungary.

Hungary agrees to accept refugees from East Germany. People pour into the  country. They also flock to West Germany and Prague.

The rift in the Warsaw Pact is obvious for all to see.

September 21, 1989: US Secretary of State James Baker tells Soviet Foreign Minister, Eduard Shevardnadze, that the US does not “desire to stir things up . . .”

October 1989: Gorbachev visits East Germany and can see that its regime is doomed, but Honecker is determined to stamp out all opposition.

In Leipzig, over 70,000 people take to the streets. Russia orders all its military to stand down, and the Leipzig police pull back.

Honecker’s allies desert him and he is voted out of office. Democratic reforms are promised.

Street demonstrations continue to grow. A half million people take to the streets of East Berlin.

November 9, 1989: Restrictions on travel to the West are to be lifted, but there is a mix-up as to when the new policy is to go into effect. People rush to see if the checkpoints and the wall are open, but the border guards have no idea what is going on. They give in and open the barriers.

West Berliners throng to the Wall to applaud the East Germans. They begin to demolish the Wall in front of the Brandenberg Gate.

President Bush decides not to “publicly exacerbate Gorbachev’s anxieties by ‘posturing on the Berlin Wall.’”

November 16, 1989: Hungary requests entry into the European Community (EC), and the leaders of Poland and Yugoslavia indicate that they will soon do the same.

December 2-3, 1989: Bush and Gorbachev hold a summit in Malta, the first face to face meeting between an American and a Soviet leader since the Wall came down.

Bush made clear that he doesn’t see the summit as a decision-making forum.

December 19, 1989: Kohl makes an evening speech in Dresden, and announces that his goal is the unity of the German nation. The crowd hails him as “their savior.” Clearly, “the East German regime was collapsing and the crowds were cheering. The moment for unity was now.”