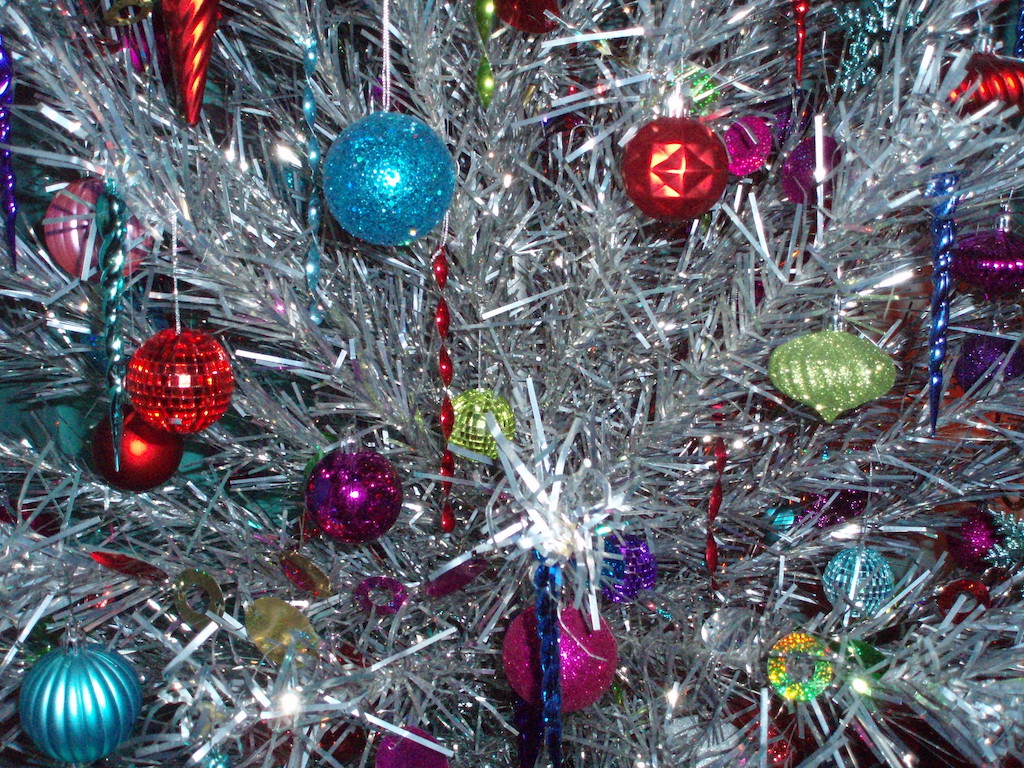 One: The Evergleam aluminum tree gained in popularity right in the middle of the Space Age craze which began on October 4, 1957. This was the day that the Soviet Union launched Sputnik, the world’s first artificial satellite, which, coincidentally, was made of aluminum.

Two: This artificial tree is considered by some to be a work of Space Age art. It’s multihued, so you can choose your favorite color: green, silver, pink, gold. The trees also had names describing their styles – pompom, frosty fountain, true taper, slim line, peacock, and straight needle.

Three: The Evergleam was created and manufactured in 1959 by the Aluminum Speciality Company, located in Manitowoc, Wisconsin, and it became a Christmas sensation when it hit the stores. While some people laughed at the idea of a tree made of aluminum, a former sales manager with the company said the design was sheer genius.

You didn’t need to struggle with lights, you didn’t have to have a college degree to put it together.

Four: The Evergleam was produced for 12 years before it ended up in basements and attics everywhere. In the past 15 years, though, it’s become a highly desired collectible. I recently saw one on e-Bay for $700.

Five: The tree consisted of a simple stand and a central trunk pole with holes drilled in it to hold the removable branches which were covered in sparkly aluminum needles. It sold for $5 to $25. Accessories included color wheels that shined different tones on the branches.

Seven: In 1965, the movie A Charlie Brown Christmas is said to have ended the trees popularity. In the movie Lucy says:

Get the biggest aluminum tree you can find Charlie Brown – maybe painted pink!

But – as we know Charlie Brown opted for the scrappiest of fresh green trees instead. In the mid- to late 60s, sales of the Evergleam declined and in 1971 production stopped. You can get a taste of the conflict below.

Eight: In 2004, there was a resurgence of the tree’s popularity, thanks to a book titled Seasons Gleamings: The Art of the Aluminum Christmas Tree. You can buy the book on Amazon here.

Nine: In 2019, a man named Theron Georges, a collector of Evergleam trees, showcased his collection in Houston’s 1940 Air Terminal Museum.  Describing the trees he says:

These aluminum Christmas trees are so much more than inanimate objects made of steel and aluminum winding. They’re like people. They have their own personalities, their own quirks, their own looks, their own stories. One of the things I love so much about collecting them and setting them up is I always wonder about what people originally owned them, and how many joyous and happy Decembers were spent with this tree in a picture window, at the center of a family gathering.

Georges has also published several more books on the tree: The Wonderful World of Evergleam and a 60th anniversary book titled The Evergleam Book.

Ten: The needles were inspired by the “chaff” the aluminum industry produced in World War II. Chaff consisted of strands of aluminum dropped from planes to create a smokescreen against radar in enemy territory. The strands inspired the design of the aluminum needles on the Evergleam.

PS:  Another coincidence: According to the Washington Post (December 13, 2019), Manitowoc’s Space Age link was reinforced when a chunk of Sputnik IV crashed right into the streets of downtown. The city commemorates this each year with Sputnikfest. You can read about it here.