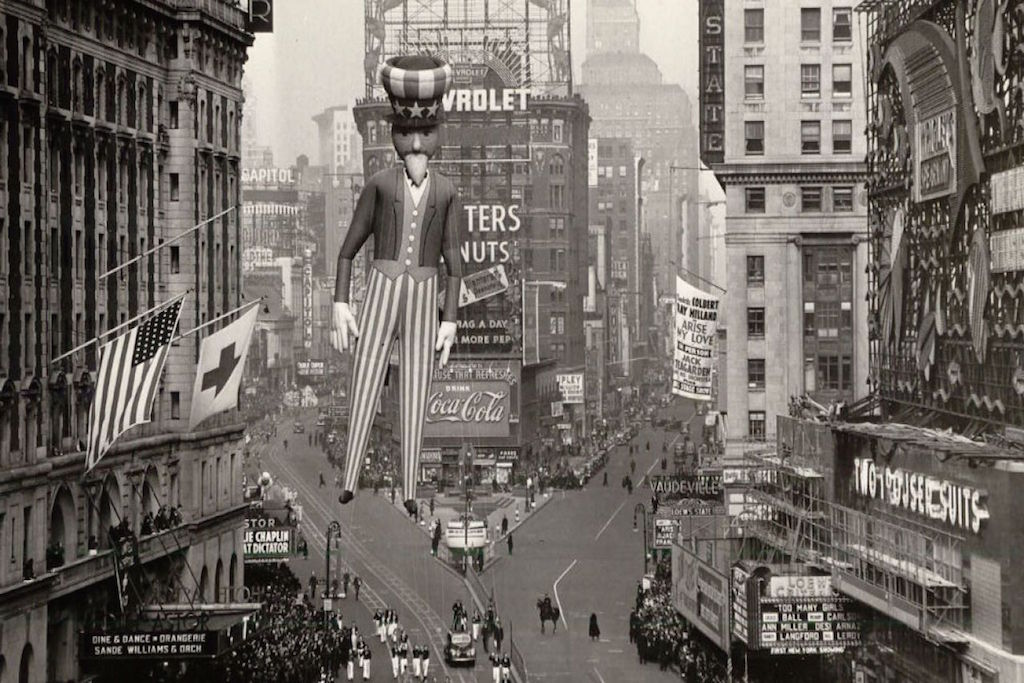 Everyone loves a parade, especially a holiday parade! That’s why nothing — not even the Cold War — could dampen the excitement surrounding New York City’s famous Thanksgiving Day Parade. Sponsored by Macy’s Department Store, it’s been a major New York City event for almost 100 years!

The Macy’s Christmas Parade kicked off in 1924, covering a six mile route beginning at 145th Street and Convent Avenue in Harlem and ending at Macy’s Department Store on Herald Square — Broadway and 34th Street. According to one report, The New York Times wrote:

the majority of participants were employees of the stores. There were, however, many professional entertainers who kept the spectators amused as they passed by. Beautiful floats showed the Old Lady Who Lived in a Shoe, Little Miss Muffet, and Red Riding Hood. There were also bears, elephants, donkeys and bands, making the procession resemble a circus parade. (The animals came from the Central Park Zoo.)

All along the route, according to the Times, the parade “was welcomed by such crowds that a large force of policemen had its hands full maintaining the police lines.” Some 10,000 people watched Santa — who rode on a float designed to look like a sled being pulled by reindeer — be crowned King of the Kiddies, then enjoyed the unveiling of the store’s Christmas windows.

The parade was such a success that Macy’s decided to make it an annual event, renaming it the Thanksgiving Day Parade in 1927. That same year, the live animals were replaced by animal shaped balloons made by the Goodyear Tire and Rubber Company in Akron, Ohio. Felix the Cat was the first balloon animal to join the parade, but he was soon accompanied by a flying dragon, an elephant, and a toy soldier.

The parade continued to delight throughout the Great Depression, but was suspended from 1942 to 1944 when both helium and rubber were needed for the World War II defense effort. Macy’s deflated its rubber balloons — which weighed 650 pounds total—and donated them to the government.

Returning to The Big Apple in 1945 with two million spectators looking on, the parade was as marvelous as ever. In 1946, though, as the Cold War was in its earliest stages, organizers changed course. Marchers were directed to follow a new route, starting at 77th Street and Central Park West and ending at 34th Street — half the parade’s previous path.

1946: The parade appears on local NYC TV channels for the first time.

1947: The parade is broadcast to a national audience on NBC, the same network that broadcasts it today. Footage from the 1946 parade is featured in the movie Miracle on 34th Street.

1952: A space man balloon is introduced.

1957: An already drenched crowd, watching the parade in inclement weather, gets even wetter when Popeye the Sailor’s hat fills with water and dumps gallons onto nearby spectators. The balloon’s hat is remade to prevent a repeat occurrence, but the same thing happens five years later when rainwater collected in Donald Duck’s hat gives bystanders an impromptu cold shower.

1958: A helium shortage prompts the US Government to ask Macy’s to go light on the use of the gas. The company collaborates with Goodyear Tire & Rubber Company and the rigging specialists Traynor & Hansen Corporation to come up with a creative solution. According to The New York Times, the balloons are filled with air and then dangled from “large, mobile construction derricks.” The Times also describes a test of the method:

A motorized derrick with a seventy-foot boom had a specially built wood-and-steel hanger attached to the end of the wire hoisting cable. The Toy Soldier, weighing more than 200 pounds deflated, was stretched full-length on a canvas carpet. Limp and sickly looking, it was not the robust figure children and adults are used to seeing. Lines from the body of the balloon were attached to the hanger while two vacuum cleaners, working in reverse, blew in air. An hour of blowing filled the figure out nicely and the boom hoisted it into the air.

1963: Thanksgiving is just six days after the assassination of President John F. Kennedy. After some debate, Macy’s decides to go ahead with the parade in hopes of raising the national spirit.

1968: Snoopy makes his first appearance as the World War I Flying Ace, but without his red dog house. Since then there have been seven different Snoopy balloons, including an astronaut and an ice skater.
In 1968 also, the Macy’s parade studio moves to its current home in Hoboken, New Jersey, in the former Tootsie Roll Candy Factory.

1971: The balloons are grounded due to high wind, the only year since the parade’s inception when winds are too strong for them to fly.

1973: Like cereal? Is your favorite Crispy Critters? Then you’re happy to note the appearance of Linus the Lion.

1975: The Dino the Dinosaur Balloon is inducted into the Museum of Natural History as an honorary member.

1989: The Parade marches through its very first snowstorm.

1990: Macy’s introduces a new spectacle and a new word — the falloon.  A falloon is a cold-air balloon originating from a float in the parade. The first falloons bring to life characters from The Wizard of Oz and Paddington Bear.

Today, as many are talking about a new Cold War, the Macy’s Day Parade is a massive production. It features over a dozen helium-filled balloons up to 40 feet tall and 28 feet wide — but they are required to fold down into a 12 foot by 8 foot box to make the journey through the Lincoln Tunnel from New Jersey to New York. The parade also includes almost 30 parade floats, 1,500 dancers and cheerleaders, more than 750 clowns, marching bands from around the country, and more than 8,000 participants.

Hope you all have a wonderful Thanksgiving!!