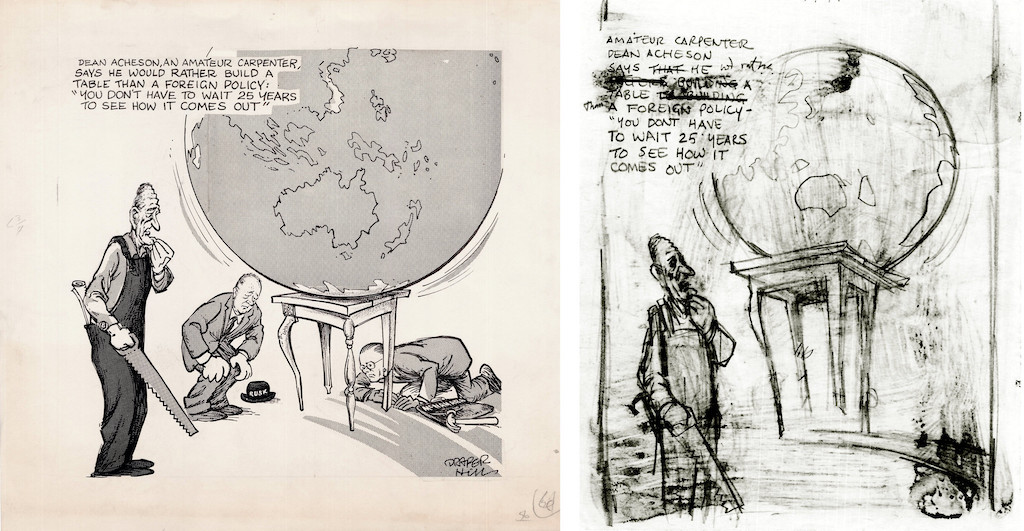 Recently, I’ve been seeing lots of news headlines like this one from the New York Times: “For some, Afghanistan Outcome Affirms a Warning: Beware the Blob.”

At first read, I didn’t know what they were talking about because the only BLOB I could think of was a 1958 film where an alien lifeform consumes everything in its path as it grows and grows. That, or some kind of gooey stuff that they only sell at Halloween. But then I read the teaser:

The chaotic withdrawal from Afghanistan exposed the shortcomings of views within the foreign policy establishment, also known as ‘The Blob.’

The text of the article went on to say:

The term “Blob” is generally understood to describe members of the mainstream foreign policy establishment — government officials, academics, Council on Foreign Relations panelists, television talking heads and the like — who share a collective belief in the obligation of the United States to pursue an aggressive, interventionist policy in the post- 9/11 world. The wars in Iraq and Afghanistan are seen in this context as Blob-approved.

When I read this I started wondering: When did the Wise Men morph into THE BLOB?

You remember The Wise Men don’t you? They’re the group of six men who shaped America’s emergence as a post World War II superpower during the early years of the Cold War.

I’ve just started reading the definitive book about them, The Wise Men: Six Friends and the World They Made,  by Walter Isaacson and Evan Thomas. (paid link) I picked up the book — in fact, I’m obsessed now with the beginning of the Cold War — because of the mess we seem to have made in the world writ large. I’m confused about how we went from The American Century to (purported) American Decline. I’m still in Chapter One (Architects of the American Century) but I have to admit that I’m impressed by men who were bipartisan by nature, and who often served under presidents from a political party that was different than their own.

A brief rundown of each of the six follows:

William Averell Harriman (called Averell) was Ambassador to the Soviet Union when Franklin Roosevelt died on April 12, 1945. As Roosevelt’s “special envoy” to Churchill and Stalin, he’s said to have “grown increasingly dubious about Franklin Roosevelt’s hopes that the U.S. and the U.S.S.R. could be allies in peace as they had been in war. . .”

Harriman’s “attitude toward the Soviets was that of a tough businessman toward a competitor, firm yet pragmatic. . . . He earned the nickname ‘the Crocodile’ by affecting a drowsy manner that would suddenly give way to a snap of action.”

George Kennan was an embassy counselor to Averell Harriman. He helped shape Harriman’s views about the Soviets and he even drafted some of the ambassador’s cables.

John McCloy, Roosevelt’s Assistant Secretary of War, had a ‘distaste for ideological battles’ and was particularly suited to action. He was convinced that the U.S. could not return to a policy of isolationism, but must exert leadership in a changing world.

McCloy “may hold the record for the number of Cabinet posts rejected by one man, preferring to spend most of his life as one of the nation’s most influential private citizens.”

Robert Abercrombie Lovett was Harriman’s former Wall Street partner. A superb administrator, he “did more than any other man to bring the U.S. into the age of strategic air power.”

Lovett was convinced that strategic bombing was critical in ending the war in Germany. He advocated doing the same in Japan.

Dean Gooderham Acheson, Assistant Secretary of State in 1945, had worked with Harriman on Lend-Lease negotiations with the Kremlin, and was known for his ‘flashy wit.’ He was convinced that Truman had good instincts and would depend on the right people.

Acheson’s memoir, Present at the Creation, is a must read. (paid link)

Charles Bohlen served as the State Department’s liaison to the White House during the Truman administration. He was the first to inform Truman that “the Soviets were ignoring the pledges made at Yalta two months earlier.

At the end of his career, Bohlen served as the U.S. Ambassador in Moscow.

Clearly, the group of men discussed above were the embodiment of the American Establishment during the Cold War’s formative years. As such they were often criticized. For example, in a celebrated 1966 speech to the Americans for Democratic Action, John Kenneth Galbraith, the esteemed economist, “blamed the deepening Vietnam entanglement” on the group, calling them “the foreign policy syndicate of New York . . .”

Still, they were praised by others. Henry Kissinger writes:

For the entire postwar period, foreign policy had been ennobled by a group of distinguished men who, having established their eminence in other fields, devoted themselves to public service.

He goes on to call them

An aristocracy dedicated to the service of this nation on behalf of principles beyond partisanship.

Paul Nitze, an expert on military power and strategic arms, speaks of the “golden age of the Establishment,” noting:

I have never seen such a panoply of first-class people, who never thought of putting their interests above the nation’s.

Now let’s cut to the present day, and the sense that the current foreign policy establishment, THE BLOB, gets things all wrong, and that the Afghanistan withdrawal was a defeat for its position.

According to The New York Times, the term was coined in 2016 by Ben Rhodes, a deputy national security adviser for President Obama. Rhodes says it was meant to be a criticism directed at foreign-policy experts with an “unrealistic set of assumptions about what America could do in the world.” Back in 2016, he singled out “Hillary Clinton, Robert Gates and other Iraq-war promoters from both parties” with a tendency to “whine incessantly about the collapse of the American security order.”

Not surprisingly, a lot of people took umbrage at the label and Rhodes’ explanation. In fact, Foreign Affairs published an essay titled “In Defense of the Blob: America’s Foreign Policy Establishment Is the Solution, Not the Problem.”

What do you think? Is there a BLOB? If so, does THE BLOB always get things all wrong? And just how did ‘The Wise Men’ become THE BLOB? In today’s world, is everyone who opposed the withdrawal from Afghanistan an inhabitant of Blogdom?

Maybe we’d all be better off if we just tuned out of the controversy, made a big bowl of popcorn, and watched the 1958 movie.  I’ve read that even Ben Rhodes thinks his creature has grown out of control.

You can stream the full movie with Steve McQueen on YouTube for free.  The trailer is below.

As an Amazon Associate I earn a small amount from qualifying purchases. When you buy books from Amazon, using a link in one of our posts, you’re helping fund Cold War Studies. Thank you so much!