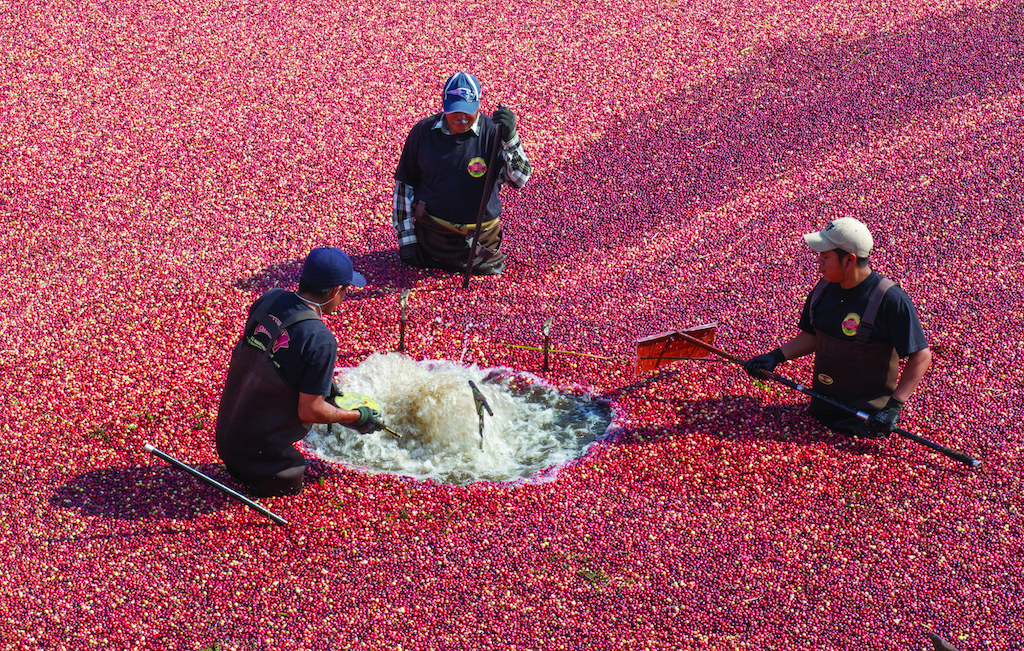 Right before Thanksgiving in 1959 the United States was hit with a different kind of Red Scare. Primed for panic and paranoia by Senator Joseph McCarthy’s red baiting taunts, Americans reacted anxiously when told that the cranberries they expected to serve with their Thanksgiving turkeys might be contaminated by a chemical weed killer known to cause cancer in animals.

What made things worse was the fact that the danger was so close to home, lurking in plain sight on supermarket shelves and in family kitchens! No red berry was safe.

Americans were told that every kind of cranberry product could be affected whether sauce or relish, spiced or sugared, chunky or jelled, room temperature or chilled, homemade or store bought.

The announcement was made by Arthur S. Flemming, the Secretary of Health, Education, and Welfare, at one of his regular weekly press conferences. He said:

The Food and Drug Administration [FDA] today urged that no further sales be made of cranberries and cranberry products produced in Washington and Oregon in 1958 and 1959 because of their possible contamination by a chemical weed killer, aminotriazole, which causes cancer in the thyroid of rats when it is contained in their diet, until the cranberry industry has submitted a workable plan to separate the contaminated berries from the uncontaminated.

Talk about a berry bomb.

For Cranberry Bog Owners, the date of Secretary Flemming’s announcement, November 9, 1959, became a “Red Monday,” dumping the industry’s biggest annual sales period into the trash heap and threatening to destroy the industry’s existence.

The cranberry industry was under attack at its busiest time of the year. At the Ocean Spray Cranberry Company in Plymouth County, Massachusetts. its president George C.P. Olsson said:

the Secretary’s announcement was ill-informed and ill-advised . . . his intentions are a cranberry witch-hunt.

The cranberry industry shouldn’t have been surprised, however. They had been warned.

Three years earlier the chemical in question had been approved by the Agricultural Department for the purpose of killing invasive plants that threatened to choke off the cranberry plants. This approval, though, was based on the condition that the chemical be used only after the harvesting of berries, before any fruit began to develop. Otherwise, it might find its way into the edible berries.

These instructions were strictly outlined by the government and widely and specifically disseminated in warning and educational newsletters and reports by Ocean Spray and other industry leaders to Bog Owners.

Ocean Spray had warned its collective of bog owners in a letter dated September 18, 1959. The letter stated that no berries that had been treated with the weed killer after that date would be accepted. It even required bog owners to agree to certify their berries, punishable as perjury if violated. However, when the FDA began testing cranberries for the traces of the weed killer a month later, they found it in berries shipped from Washington and Oregon.

According to Flemming, nobody knew the degree to which the national crops were potentially contaminated. Also, nobody could instruct the public on how to buy “safe” cranberries. Consequently, food chains cancelled all orders of cranberries. Cans of cranberry jelly and jars of cranberry relish were returned to the warehouse, and hundreds of millions of cranberries were seized, quarantined, and destroyed.

If unsure where the cranberries came from, to be on the safe side, she doesn’t buy.

Nevada declared it illegal for any supermarket grocery store and corner mom and pop shop within its borders to carry any cranberry products.

Random dragnets were conducted by a network of Ohio, New York, California, and Michigan health board food officials.

The Governor of Oregon immediately ordered that not even one can of cranberry jelly remain on the commissary shelves of all state prisons, fearful that incarcerated men might riot on Thanksgiving if served the poisonous relish.

An irate father in Chicago phoned his daughter’s school board president when he found out that the school had served a spoonful of the tainted stuff in each school lunch.

A hysterical woman in Mobile, Alabama, called an ambulance after washing cranberries to make her family’s chutney recipe.

A Boston beatnik poet scribbled cranberry notations on a coffee shop blackboard and got his picture in Life Magazine.

Iowa church ladies were warned from the pulpit to wear rubber gloves and face masks if they had to touch the berries.

Restaurants crossed “cranberry sauce” off their menus, and hotels assured the public that they would not serve the berries.

Politicians pontificated through word and action:

Democratic Senator John F. Kennedy drank a tall glass of cranberry juice and then asked for a second one. Importantly — as I’m sure you remember — he was from Massachusetts — Land of the Cranberry.

Legislators jumped into the fray:

Dr. Boyd Shaffer, a member of American Cyanamid’s Test Team, was called to testify before Congress. He said:

“Why, it would be impossible to expose humans to aminotriazole in amounts that would be toxic, and besides there was no proof that it caused cancer in people.”

Unfortunately, Dr. Shaffer had credibility issues since Cyanamid was the chemical company that invented the weed killer. But he went on to describe the weed in detail. It was called “panic grass” he said.

Meanwhile, a one hit wonder Cranberry Blues made the pop music charts.

On November 19, a plan was implemented for the immediate testing of fresh cranberries. But it was too late to save the season from a 20% decrease in cranberry sales.

Secretary Flemming finally made a concession, posing for a photo op with his wife passing him a tray of cranberry sauce.

As for the White House, the press office had assured reporters that the President and Mrs. Eisenhower would be eating some of the nationally “approved” cranberry sauce at the White House Thanksgiving dinner table.

Everyone believed it until a dinner guest emerged from the meal and let it slip that the First Lady had insisted that applesauce, not cranberry sauce, be served.

In the end, the US government offered subsidies for the unsold cranberries which were tested and found to have no pesticide residue. In fact, after the holidays the government announced that 99% of the nation’s cranberry crop had not at all been contaminated.

In an omen of things to come, the San Francisco Chronicle detailed in its article titled “A Nation Without Cranberry Sauce!:”

“One housewife whom we know says she dumped her prepared cranberry jellies into the garbage can, then sat down and smoked a cigarette in relief at having just been saved from cancer.”

Join Cold War studies in the sidebar and get the full magazine for free.