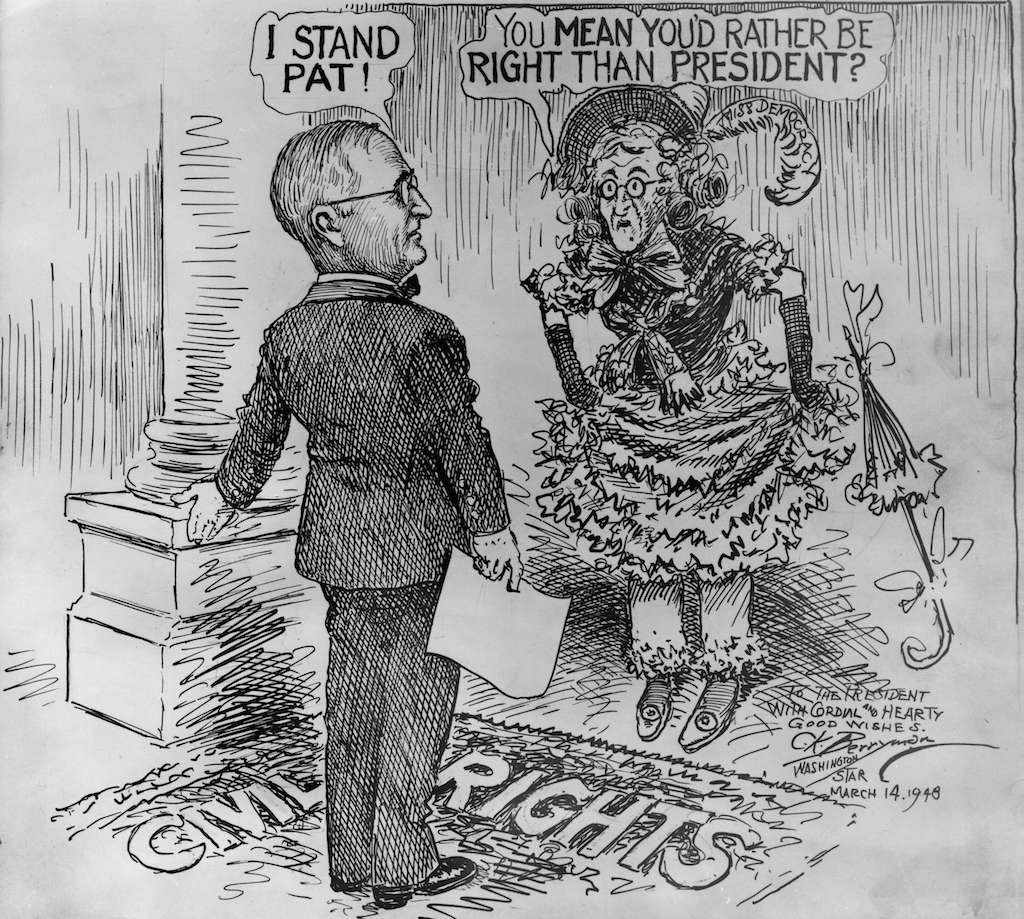 Would you rather read a comic book or a 500 page biography?

In 1948, President Truman’s campaign answered that question with a 16 page comic book published by the Democratic National Committee.

By this time, President Truman was used to the snickering of political cartoonists. They’d made fun of his stance on many controversial issues: the desegregation of the armed forces; his decision to drop the atomic bomb;  and the Republican takeover of Congress (called the Do Nothing Congress by Truman). Now that he was in the middle of the 1948 presidential campaign, political and editorial cartoons were everywhere.

Actually Truman sort of liked them. We know this because, after he left office, he became an avid collector. And, while in office — as we have seen — he used them to his advantage.

Political and editorial cartoons have long been part of propaganda campaigns.  They trace their origins in the US to Benjamin Franklin and his cartoon Join, or Die (1754). The cartoon depicts the disunity of the Thirteen Colonies during the French and Indian War. It became even more famous later on when it was used to encourage the former colonies to unite during the American Revolution.

Political cartoons were in and out of favor during the early 19th century, but in the 1880s, the media became popular again.

Some say the 1948 presidential campaign of Harry Truman is one of the greatest political campaigns in the modern era. No one gave him a chance of beating the Republican nominee, Thomas E. Dewey of New York. The Southern Democrats, called Dixiecrats, led by Strom Thurmond, and the Progressives, led by Henry Wallace, had both splintered from the Democratic party. In fact, Hubert Humphrey’s civil rights speech at the convention provoked a walk out.

Nevertheless, the convention re-nominated Truman and adopted a plank proposed by Northern liberals.

Thirty-five southern delegates walked out of the convention. The move was on to remove Truman’s name from the ballot in the southern United States. The problem of course: Truman’s support for a stronger civil rights platform than they found acceptable.

The Democratic party lost faith, and refused to spend their usual large sums of money on the election. Truman’s prospects for victory were dim.

On election day, Truman went to bed at 6:30. He woke up about midnight just in time to hear NBC announce:

While the President is a million votes ahead of the popular vote, when the country vote comes in Mr. Truman will be defeated by an overwhelming majority.

. . . to the sorrow of myself, and to those who were listening with me, it looked very much as if the election would be thrown into the House of Representatives because, of course, it was not possible for me to get a majority of the electoral votes. I went back to bed, and went to sleep.

About 4 AM Truman woke up again.  This time he heard the NBC announcer proclaim:

While the President has a lead of two million votes, it is certainly necessary that this election shall go into the House of Representative. He hasn’t an opportunity of being elected by a majority of the electoral votes of the Nation!

Truman called the Secret Service in and said:

We’d better go back to Kansas City, it looks as if I’m elected!

The Media Had It Wrong

Not surprisingly, the cartoonists had been having a field day.

Truman Cartoons in the Library of Congress:
https://www.loc.gov/collections/cartoon-drawings/?fa=subject:truman,+harry+s.

Join, or Die (1754)
By Benjamin Franklin – This image is available from the United States Library of Congress;Prints and Photographs division under the digital ID cph.3g05315. Public Domain, https://commons.wikimedia.org/w/index.php?curid=10604794