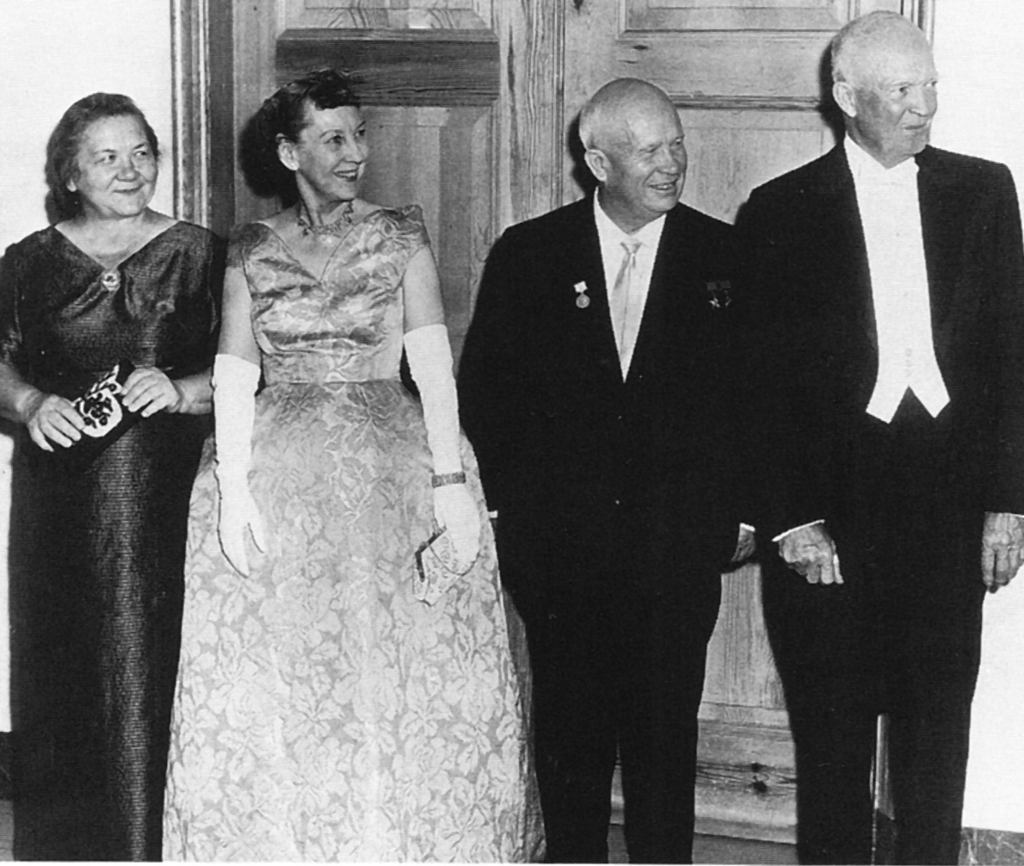 Nikita Khrushchev, the First Secretary of the Communist Party of the Soviet Union from 1953 -1964, was responsible for the launching of a bold political offensive against the West in the Third World.

At the time of Stalin’s death in 1953, Soviet foreign policy had run out of steam. Instead of applying pressure, the Eisenhower administration extended an olive branch, expressing interest in solving lingering problems, especially the Korean conflict. The Kremlin seemed receptive to the opportunity and an armistice was reached in Korea in June 1953.

Shortly after, in July 1953, the Soviets announced a 4-million-ruble contribution to the United Nations program of technical assistance to the underdeveloped nations.

In September 1953, the Soviet government signed a 5 year trade agreement with India.

In 1954 also, in a major initiative toward the Arab world, the Soviet Union cast vetoes in the UN Security Council protecting the Arab position on several issues. One veto blocked a Western resolution on the division of Jordan River waters. Another blocked a New Zealand resolution that would have reaffirmed the 1951 condemnation of Egypt’s denial to Israel of access to the Suez Canal.

In February 1955, The Soviets and India announced a million-ton steel mill project at Bhilai. The Soviets gave a $100 million credit to India for this project.

In April 1955, a conference of nonaligned states was held in Bandung, Indonesia. The Soviets recognized the conference, and wrangled an invitation for their Chinese allies, thus undermining rigid adherence to Zdanov’s “two camp” strategy. Now, the nonaligned nations mattered.

In June 1955, India’s prime minister Nehru paid a visit to the Soviet Union.

In November and December of that same year, the Soviet’s new Premier, Nikolai Bulganin, and Party First Secretary Khrushchev visited India, Burma, and Afghanistan. The India trip was the first of Khruschev’s many Third World encounters.

The visit to India was the highlight of the officials’ month long journey. While there, the Soviets promised support for the Indian position on the Kashmir dispute with Pakistan and the Goa dispute with Portugal, scoring points at the expense of the British, the Americans, and the Chinese.

Later that same year, on September 27, the Soviets chalked up another success when Egypt’s leader, Gamal Abdel Nasser, announced that his country would be purchasing advanced weapons from Czechoslovakia. Although Czechoslovakia was the supplier of record, Nasser soon admitted that the deal had been negotiated with the Soviets. The $200-$250 million barter deal (some say as high as $400 million) included Soviet MIG-15 and MIG-17 jet fighters in exchange for Egyptian rice and cotton.

The Soviets had moved from ceremonial visits, trade deals, and steel mills to massive arms supply in a region of vital strategic importance to the West.

In these early years, the Soviet advantage seemed overwhelming. Khrushchev went so far as to declare that the new nations born of the breakup of the colonial empires were “natural partners of the socialist countries in a vast zone of peace . . . .”

Still, many of the emerging nations valued their independence, and only a handful — North Korea, Cuba, North Vietnam — declared themselves fully “Marxist-Leninist.”  Nevertheless, it would take the West 30 years to make significant headway.

In March 1956, on the heels of the Soviet tour of India, John Foster Dulles (the US Secretary of State) paid a visit to New Delhi. Since 1951, the United States had been shipping huge quantities of emergency wheat and rice to India to relieve famine.

According to Peter W. Rodman, in his book More Precious Than Peace:

From 1945 to 1956, U.S. economic aid delivered to India, including both loans and grants, totaled nearly $435 million. (Soviet aid delivered through 1956 totaled some $40 million, though over $300 million was pledged.) U.S. aid was predominantly in the form of grants; Soviet aid was then entirely credits. Yet when Dulles arrived at Palam Airport, Nehru was not there to greet him, on the grounds that he (Nehru) was not only foreign minister but also head of government and therefore their ranks were not equal.

Not surprisingly, Americans were quite sensitive about the treatment. It raised a number of questions about American’s role and prospects in the new nations.

President Eisenhower and his secretary of state acknowledged that the Soviets presented strategic challenges, and they devoted a great deal of diplomatic effort to constructing alliances to block Soviet expansion. “Pactomania” as it was called was a worldwide attempt to counter the Soviets.

Covert action was also on the table: the Eisenhower administration used CIA action in Iran in 1953 to remove Prime Minister Mosaddeq from office; there was action in Guatemala in 1954; and most embarrassingly, an American U-2 was shot down in May 1960 in a reconnaissance overflight of the Soviet Union.

Despite all the above activity, the administration was concerned about the monetary costs of opposing Soviet expansionism over a long period of time, fearing that it might pose an economic threat to the American way of life.

America’s leaders understood that they needed to have a positive program to respond to Soviet activities in the Third World. They wanted to distance the US from the colonial legacy and respond to the aspirations of the new nations for economic advance, social progress, and political independence. Soon the nation was engaged in a prolonged national debate over the purposes of foreign aid. As with many Cold War policy disagreements, this debate is continuing as we move into the 2020 election year.

Conversation Starters: Here are a couple of questions to consider. Feel free to add your opinion in the comments.

What do you think about “pactomania?” Are the agreements the United States signed during the Cold War still important today?

How important is America’s leadership on the world stage?