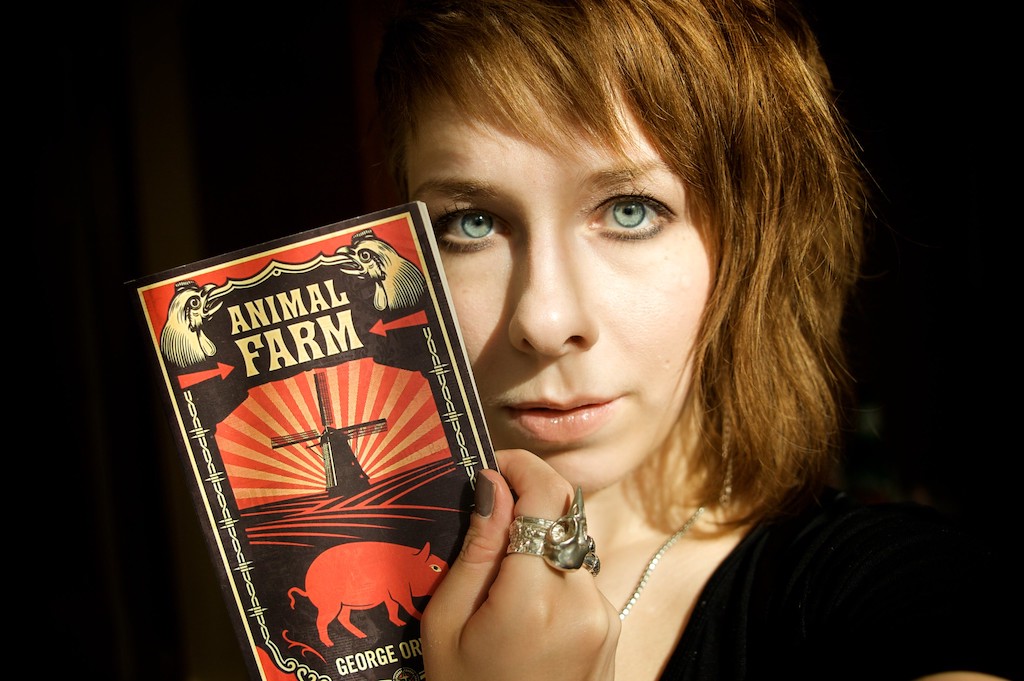 Between February and May 1955, a group secretly funded by the Central Intelligence Agency inflated ten-foot balloons and armed them each with thirty CIA made copies of George Orwell’s Animal Farm. The balloons were scheduled to drop their contents in Poland, deep behind the Iron Curtain.

The scheme was part of a larger effort to penetrate the wall of censorship the Soviet Union had erected around its Warsaw Pact allies . . . .

Although we’re all familiar with the term hearts and minds, it may still be hard for us to understand the seriousness of the phrase when applied to the half-century Cold War. For while the conflict was often described as a battle of ideas, imposing ideology by military means was never an option. Instead, various types of propaganda and disinformation proved more effective and, in the end, literature turned out to be a very sophisticated form of persuasion.

Consequently, it was hoped that Animal Farm —  George Orwell’s telling of a revolution gone awry in service of corrupt and self-serving leaders — might lead Polish citizens to question the motives of those in power in their own country.

Cultural Warfare in the Soviet Union

By the time the Cold War began in the late 1940s, authorities in the Soviet Union were already experienced in cultural warfare, having used literature to cement power and remake society after the 1917 Bolshevik Revolution.

Revolutionary leadership agreed that literature was political, and they determined that literature produced in the Soviet Union “should light the path to socialism.” In the first twenty years after the revolution, literacy rates in the country rose from below 30% to over 75%.

By the late 1920s, the writings of Friedrich Engels, Karl Marx, Vladimir Lenin, and Joseph Stalin were published in substantial numbers. There were also large runs of the Russian classics, centering on authors like Anton Chekhov, Nikolai Gogol, Alexander Pushkin, and Ivan Turgenev.

Every publishing house came under the control of the state publisher Gosizdat, and all manuscripts had to be submitted for censorship. Works that were thought to be “bourgeois” or “reactionary” were banned, and the authors were punished.

In 1932, under Joseph Stalin, the different writers’ groups were disbanded and the Union of Soviet Writers was formed. Members were instructed to write books adhering to “socialist realism.” Nonconforming writers faced the gulag.

At the same time that the Kremlin placed restrictions on literature at home, it staged

The objective was to convince intellectuals that the Soviet Union was “a force for good in the world against the evils of exploitative capitalism and imperialism.”

The organization responsible for cultural propaganda was the Communist International or Comintern, founded in 1919. The group set up “charities, publishers, newspapers, magazines, theaters, film studios, and cinema houses” all over the globe, targeting famous Western writers like John Dos Passos and Ernest Hemingway with propagandized messages.

The Comintern also housed the Department of International Communication which collaborated with the Soviet intelligence service. By the mid 1930s, both groups were involved in garnering support for the Republican cause in the Spanish Civil War.

Belatedly, during World War Two, the United States realized the value of cultural warfare. The Office of War Information (OWI), established in 1942, made literature a central plank of its propaganda operations. One OWI poster carried the slogan, “Books Are Weapons in the War of Ideas.”

More than 120 million books were distributed to American soldiers as a way of bolstering morale, including works like A Tree Grows in Brooklyn and The Great Gatsby.

In 1944, the OWI began producing books in French, German, and Italian to be distributed in areas liberated from the Axis powers. Many of the books were blatantly pro-American, but others, like Hemingway’s For Whom the Bell Tolls, celebrated American literary achievement. The strategy was to reach a wide audience and to exert influence since it was thought  that “books are the most enduring propaganda of all.”

At the end of World War Two, as tensions escalated with the Soviet Union, the Truman administration acknowledged that the United States held technological advantage, especially regarding nuclear weapons. However, it was determined that Washington lagged behind in the areas of espionage, propaganda, psychological warfare, and cultural leverage. America’s Psychological Strategy Board warned that The Short History of the Communist Party was the best selling book in the world with the possible exception of The Bible. America needed to catch up.

Therefore, at the same time that the rival superpowers engaged in an arms race and competition in space, they embarked on an escalating “book race.”

In Moscow, the International Book Publishing Corporation produced large numbers of books in “free world languages” — 40 million by 1950, and 40 million per year by 1961. In the 1970s, more than 300,000 people were employed by the centralized publishing industry.

While most books were Communist political tracts, cheaply mass-produced and sold at a loss, there were also editions of novels like Mikhail Sholokov’s And Quietly Flows the Don.

The United States instituted its own book programs, incentivizing the publication of American books in many foreign markets, including Germany, Poland, and Yugoslavia. Later it did the same in Pakistan, Burma, the Philippines, Taiwan, and Indonesia. The State Department made sure the books contained nothing harmful to US interests.

The State Department also established a network of reading rooms around the world. By 1962, its Information Center Service had 181 centers in 80 countries plus 85 other reading rooms. None of these stocked anything pro-Communist. Nor did they stock anything that would point to America’s moral failings (like the continuing racist treatment of the country’s African Americans).

Winning over intellectuals in countries where there was a strong Communist Party — Italy, Germany, and France, for example — was also seen as essential to shaping public opinion. The best way to do this was thought to be through the promotion of literature.

The campaign to influence intellectuals and writers was both overt and covert with the CIA actively involved. Surprisingly, the US government and its agencies ended up as champions of elitist art and literature — that of James Joyce, Jackson Pollock, and William Faulkner — in large part because it was banned in Moscow. By the 1960s, many prominent American and British writers had at one point taken a paycheck for their writing that was indirectly paid for by the CIA.

Around the world, authors were directly involved in how the global conflict played out. Some, like Vaclav Havel, played a role in bringing the Cold War to an end. On both sides of the Iron Curtain, writers exploited their power. In the end, as Duncan Hunter asserts, the Cold War shaped literature. Still, it’s also necessary to acknowledge that literature shaped the Cold War. More on that in coming posts.

For more information on cultural warfare see our post on the Cultural Cold War.