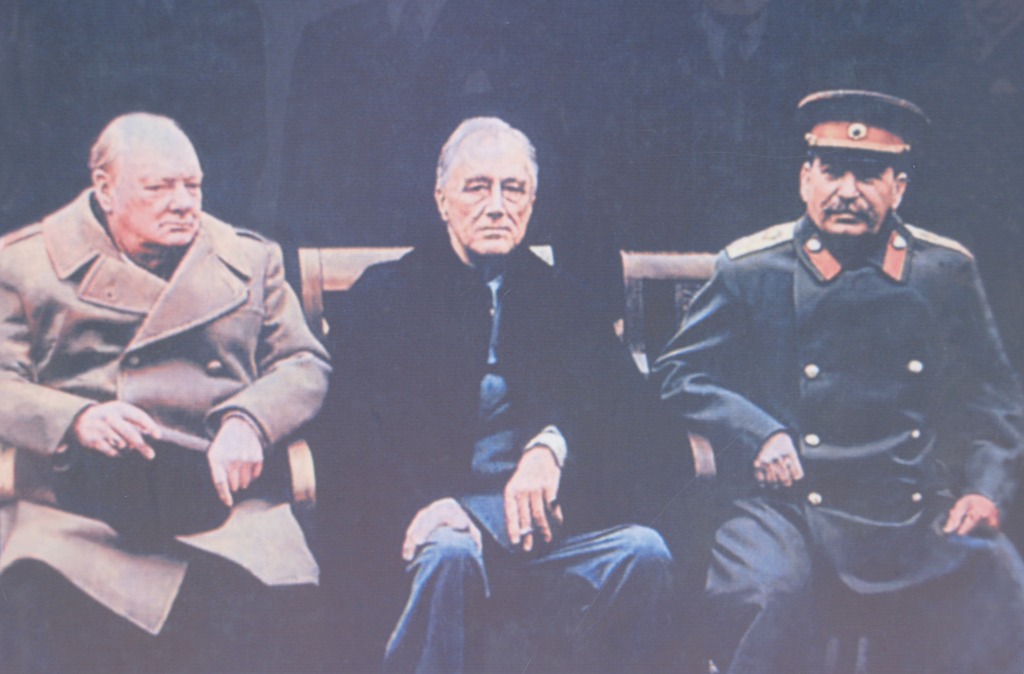 The “Big Three” — Britain, Russia, and the United States — met at Yalta, a resort on the Russian Black Sea, in February 1945. Their purpose was to shape the post World War II world. During the conference, the Western Allies (to their regret) acknowledged that the enormous Soviet sacrifices and successes in the war entitled the Soviet Union to a preeminent role in Eastern Europe. This understanding was reflected in a number of key decisions that — during the Cold War — became known as “the treason of Yalta” or the “Yalta agreements.”

At the conference a nasty debate erupted over the future of Poland. The Soviets had recognized a communist-dominated regime before the meetings began. During the talks, FDR and Churchill demanded that pro-Western Poles be included in the government. The three men finally agreed that the regime must be “reorganized on a broader democratic basis.” To reinforce the agreement, FDR proposed a “Declaration of Liberated Europe,” providing that each of the three powers would pledge cooperation in applying the self-determination principle to newly liberated nations. The Russians amended the declaration until it was almost meaningless.

Stalin left Yalta believing that his allies had acquiesced to his domination over Eastern Europe. But he had miscalculated. Two weeks after the conference adjourned, the Soviets demanded that the king of Rumania appoint a communist-controlled government. The US claimed that Stalin was breaking the Declaration of Liberated Europe. Control of Eastern Europe was at stake. Soon after, a crisis developed when Russia refused to allow more than three pro-Western Poles into the 18 member Polish government.

For America, Poland became the test case of Soviet intentions. On April 1, Roosevelt warned Stalin that the Soviet plan for Poland could not be accepted. Within a week Roosevelt was dead and the new President, Harry Truman, inherited a decayed alliance. Truman demanded that the Soviets agree to a “new” (not just “reorganized”) Polish government. Stalin rejected Truman’s demand, observing that it was contrary to the Yalta agreement. Truman’s toughness reinforced the Russian determination to control Poland. By mid 1945, Churchill would note that an “iron fence” was falling around Eastern Europe. (For more on the Iron Curtain, see letter I.)