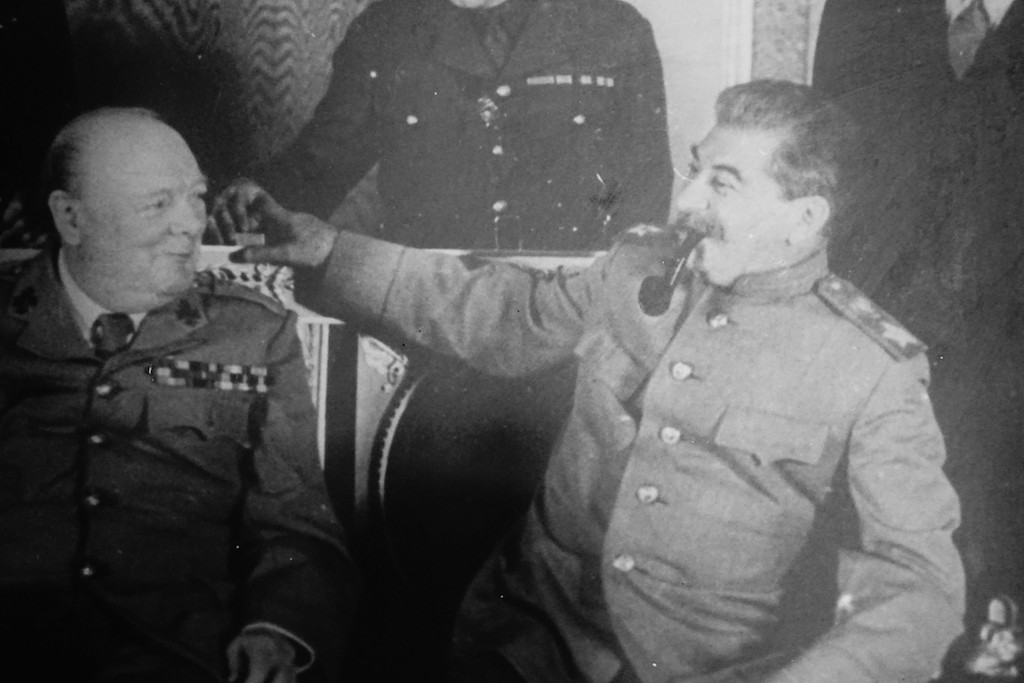 In a previous post, I mentioned that America had just dropped the atomic bomb on Hiroshima, and that the Soviets were responding by pushing forward with an effort to produce their own atomic weapon. In other words, the arms race was on. In this post we’ll be focusing more on the threat of conventional military confrontation.

You can listen to Cold War Studies podcast on “More Causes of the Cold War” here. But you may want to take a look at the Timeline first.

End of WW2: The communists control one-fifth of China and more than 105 million people. The Nationalist President, Chiang Kai-Shek squanders more than a billion dollars of American aid.

1945: Stalin demands a partnership with the Turks to control the strategic Dardanelles Straits.

1945: Russian armies move into Manchuria to disarm the Japanese. They remain to loot industrial machinery for the rebuilding of Russian industrial capacity. Mao and Chiang race to control Manchuria.

August 1945:  Chiang Kai-Shek’s Nationalist Chinese government and Stalin agree to a Treaty of Friendship and Alliance.

October 1945: A plebiscite is held in Outer Mongolia. Voting under Soviet supervision, the country decides to become independent of China and to move closer to Russia. The vote count is 483,291 to 0.

1946: American and Russian military forces confront each other in Manchuria, Iran, Turkey, and Europe. The situation in China is critical.

Early 1946: Most British and American forces have withdrawn from Iran. The Russians refuse to leave, demanding oil concessions. Washington takes the Iranian case to the UN Security Council.

February 1946: Stalin brings charges in the UN Security Council against the British repression of the Greek rebellion and British and Dutch attempts to suppress revolution in Indonesia.

February 9, 1946: In an appearance at the Boshoi Theater, Stalin announces that war is inevitable as long as capitalism exists.

March 1946: The US releases a plan for the control of the atom called the Acheson-Lilienthal Proposal.

March 5, 1946:  In a speech in Fulton, Missouri, Britain’s Prime Minister Churchill claims that “an iron curtain has descended across the continent” allowing a “police government” to rule Eastern Europe.  What the Soviets want, he says, is “the indefinite expansion of their power and doctrine.” The speech is not well received.

Late March 1946: Iran and Russia announce that the Red Army will leave Iran.

April 1946: Bernard Baruch is named the first American delegate to a new UN Atomic Energy Commission. He distrusts the Acheson-Lilienthal Proposal and comes up with his own plan, the Baruch Plan. His plan focuses on eliminating any Soviet power to veto inspections or sanctions. This is unacceptable to the Russians.

Summer 1946: Europe is in the limelight. Germany, and the control of atomic weapons, emerge as the central issues.

June 1, 1946: The American Congress establishes a US Atomic Energy Commission under the Atomic Energy Act of 1946. The act prohibits any exchange of information on the use of atomic energy with any nation.

July 1946: Bikini Atoll. You can read more about it here.

August 1946: Stalin sends a note to Turkey which the US interprets as a Soviet attempt to dominate that nation, threaten Greece, and intimidate the rest of the Middle East.

Autumn 1946:   Truman’s task now centers on the rebuilding of wartorn Western Europe. The West isn’t threatened by the Red Army, but by internal collapse.

If you haven’t already done so, be sure to listen to Cold War Studies podcast on “More Causes of the Cold War.” You’ll find a lot more information there about early Cold War events. (Unfortunately, the text of the podcast is no longer available)

TREATY OF FRIENDSHIP AND ALLIANCE: A treaty between the Soviet government and (Nationalist or ‘Old’) China signed in August 1945. According to the terms of this treaty,  Stalin received substantial territorial concessions in return for his agreement to deal with Chiang Kai-shek, not Mao Ze-dong. You can read the Treaty of Friendship and Alliance here.

DOMINO THEORY: In 1946, the theory was based on the assumption that Stalin, like Hitler, was intent on unlimited conquest. The theory was (later) formally defined by President Eisenhower who said:

You have a row of dominoes set up, you knock over the first one, and what will happen to the last one is the certainty that it will go over very quickly. So you could have the beginning of a disintegration that would have the most profound influences.

The report represented an attempt by the United States to maintain its superiority in the field of atomic weapons while also trying to avoid a costly and dangerous arms race with the Soviet Union.

BARUCH PLAN: Presented to the United Nations on June 15, 1946, the Baruch Plan proposed that atomic energy be controlled through international management of the necessary raw materials and inspection by international agencies. The Russians were opposed, and the plan failed to gain acceptance, setting the stage for the Cold War arms race.

ATOMIC DEVELOPMENT AUTHORITY: As part of his plan, Baruch proposed the establishment of an international atomic development authority.  This group would control all activities dangerous to world security and possess the power to license and inspect all  nuclear projects. Once such an authority was established, no more bombs should be built and existing bombs should be destroyed. The authority was unacceptable to the Russians and was not established.

US ATOMIC ENERGY COMMISSION: The United States Atomic Energy Commission (AEC) was an agency of the United States government established by the US Congress to foster and control the peace time development of atomic science and technology.

ATOMIC ENERGY ACT OF 1946: President Truman signed the McMahon/Atomic Energy Act on August 1, 1946, transferring the control of atomic energy from military to civilian hands, effective January 1, 1947. The agency was abolished by the Energy Reorganization Act of 1974.

You can listen to our first podcast here: CAUSES OF THE COLD WAR.

Movies for a rainy day: https://www.looper.com/1036921/underrated-political-thrillers-to-put-on-your-watchlist/