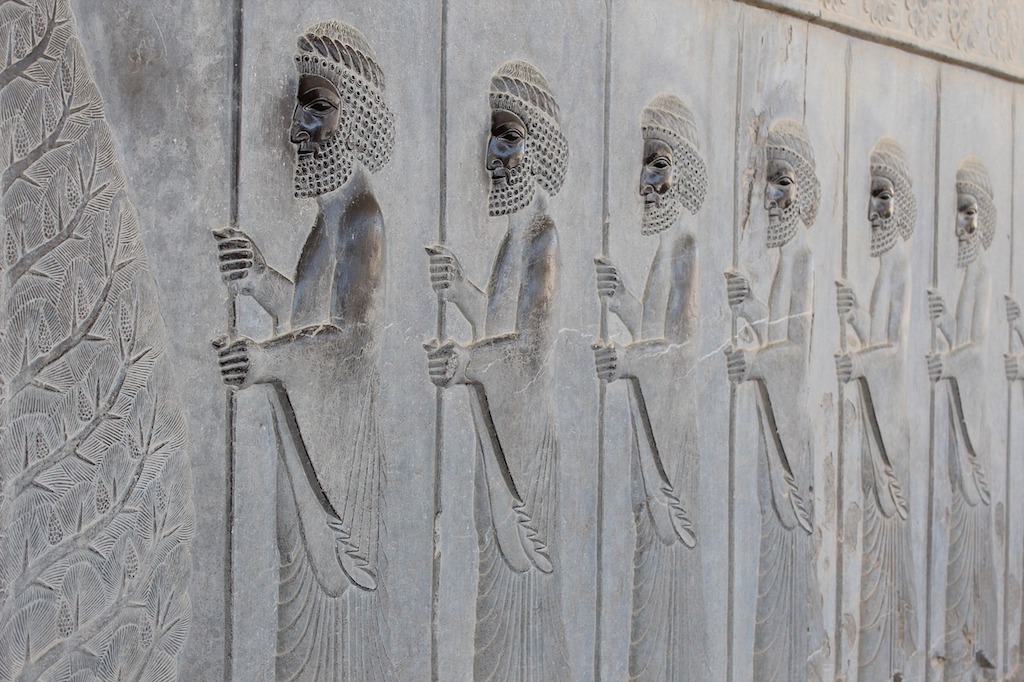 Last month on February 11, Iran celebrated the 40th anniversary of the day the Ayatollah Khomeini returned from exile to herald the new Islamic Republic of Iran. Aljeerza reports that Iranians poured into the streets across the country,  “renewing their allegiance to the country’s Islamic principles at a time of rising economic and political pressure amid the resumption of punishing US sanctions.”

As I looked at the photos from the celebration, my mind took me back in time to a different kind of observance, a week long spectacle in October 1971 celebrating 2,500 years of Persian monarchy. The bash, thrown by the then Shah of Iran, Mohammad Reza Shah Pahlavi, was opulent.

While the Iranian news agency, Tasnim, reports that “hundreds of foreign guests, including scientific, political, and influential figures travelled to Iran” for the more recent event, their stay was not steeped in luxury and ostentation. And, while hundreds of cameramen and journalists covered the massive rallies in Tehran and other cities, the event did not attract the in-depth international exposure of the shah’s famous party.

The 1971 setting, the ceremonial city of Persepolis, near Shiraz, was magisterial, a magnificent reminder of grandeur past.  However, the shah wasn’t really there to celebrate the glories of days gone by. He was there to announce his own mission, his personal rendezvous with history, his desire to link his monarchy directly to that of Cyrus the Great, the founder of the Empire. Of course any connection with Cyrus was a bit presumptuous. The shah’s achievements, however stellar, did not match those of a ruler most famous for freeing the slaves of Babylon, and declaring the world’s first charter of human rights.

As soldiers blocked roads to keep ordinary Iranians at bay, dignitaries from around the world were downing quail eggs stuffed with caviar, crayfish mousse, roast lamb with truffles, roast peacock stuffed with foie gras, and over 25,000 bottles of wine. This at the same time that a serious famine was occurring in Fars Province, the region of Iran where Persepolis is located.

The Ayatollah Khomeini condemned the event from exile in Iraq, inciting protest and asserting:

It is the duty of the Muslim people of Iran to refrain from participation in this illegitimate festival, to engage in passive struggle against it, to remain indoors during the days of the festival, and to express by any means possible their disgust and aversion for anyone who contributed to the organization and celebration of the festival. Let the festival organizers know that they are despised by the Islamic community and by all alert peoples throughout the world, that they are hated by all lovers of freedom, and that Islam and the Muslims are repelled by the very notion of monarchy.

While the Shah wanted the celebrations to improve his country’s image abroad, accusations of excessive spending were common in the Western press. In the wake of news stories about human rights abuses, massive disparities in wealth, and student protesters who were arrested and beaten, the shah was indignant.

“So what are people complaining about?” he asked. “That we are giving a couple of banquets for some fifty heads of state? We can hardly offer them bread and radishes, can we?”

Today a reminder of that controversial celebration lives on in the public’s national consciousness, in Iran’s own memory palace — an imaginary bastion filled with collective whisperings of foreign conspiracy, tales of great power domination, and stories of Cold War subterfuge.

These spaces have other chambers also, areas harboring resentment over American CIA intervention, anger over the expenditure of vast oil revenues on a misguided strategy of military-led development and, always, outrage over the arrogance of a detested shah. Bitterness and resentment, though, continue to focus, especially, on Reza’s  October 1971 extravaganza.