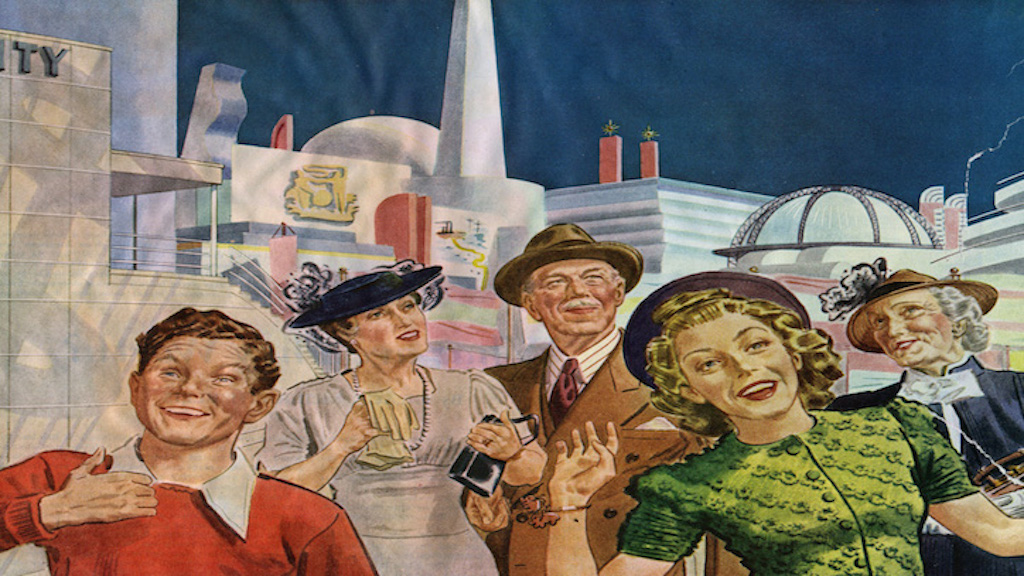 Sandwiched between the Great Depression and the US entry into World War II, the 1939 World’s Fair opened in Queens, New York, on April 30, 1939. The celebration was so ambitious that a new bridge — the Bronx-Whitestone — and a new subway line were added to New York City’s infrastructure.

Opening day was full of symbolism, as the Fair’s Grand Opening was held on the 150th birthday of George Washington’s inauguration. Never mind that the Sunday was sweltering. Hordes of visitors showed up to see the fair’s pavilions, representing many of the world’s nations — sixty to be exact. Each creation was its own small world complete with exhibits, artifacts, food, and performances.

Postcard of George Washington at the 1939 World’s Fair

Walt Disney liked the concept so much that he modeled EPCOT on it.

The presence of sixty foreign participants makes the Fair a true parliament of the world. Here the peoples of the world unite in amity and understanding, impelled by a friendly rivalry and working toward a common purpose: to set forth the achievements of today and their contributions to the ‘World of Tomorrow’.

Unfortunately it didn’t take long for these friendly rivalries to erupt into world war. But on the Fair’s opening day, all was well.

At the center of it all were the 700-foot Trylon and 200-foot Perisphere, the symbols of the fair. The visitors loved them, referring to them as the spike and the ball.

Inside the 16-story Perisphere, in an auditorium the size of Radio City Music Hall, thousands rode on two moving balconies and looked down on Democracy, a mammoth model of the city of tomorrow — a city of broad streets, many parks, and large buildings.

America’s largest corporations promoted their newest and most advanced products. Westinghouse even made a robot named Electro, who smoked cigarettes, counted on his fingers, and swept the house.

“Hard to top that,” you might think. “Well, guess again.”

Not to be outdone, the Soviets unveiled a 79-foot tall statue of “Joe the Worker.” Joe was made of stainless steel, and spent his days guarding the entrance to the Soviet Union’s pavilion. Also known as “Big Joe” or “working Joe,” the statue was mounted on a 188-foot pedestal, increasing his height substantially. To make his presence even more in your face, he held an illuminated Red Star, “the symbol of communism.” According to newspaper reports, Joe’s outstretched hand “could be seen for miles.”

The Soviet pavilion itself was massive. In fact, they had two pavilions.

One was a flamboyant display of life and achievement in the Soviet Union designed to promote tourism and to show the increased cooperation with the West that was evident in the 1930s. The other was an Arctic Pavilion, dedicated to Soviet achievements in the Arctic.

Actually the Russians had outspent the Americans on the fair — $4 million to $3 million.The facades of their building were decorated with eleven large panels representing the eleven Soviet Republics. Inside, there were paintings and sculptures by leading Soviet artists, and handicrafts from Central Asia and the Caucasus — wood carvings, lacquer work, embroidery, and hand woven carpets and rugs. Soviet films were playing, and there were performances by the Red Army Ensemble of Singers, Dancers and Musicians. They even had a reproduction of one of the stations in Moscow’s new “palace subway,” and a replica of the Palace of Soviets constructed in semiprecious stones.

Soviet Pavillion at the 1939 World’s Fair

Hungry? Thirsty? Visitors could taste Soviet food and wine while viewing an “Intertourist Map of the Soviet Union” that featured sample travel itineraries throughout the USSR.. They also distributed informational brochures on specific destinations like Sochi. The brochure boasts:

The Caucasian shores of the Black Sea, that blissful sunny corner of the globe, has always enticed the traveler with the incomparable beauty of its scenery and the wonderful healing power of its climate . . . . This lovely resort stretches for 25 kilometers along the sea coast. Magnificent sanatoria, rest-homes, clinics, and hotels nestle amid . . . fine bathing places and sports stations.

As if this wasn’t enough, the Soviets went a step further. As mentioned above, they had a separate Arctic Pavilion, close to the main Pavilion, that was dedicated to Soviet Achievements in the Arctic. Outside, there was the airplane that Valery Chkalov flew when he made the first transpolar flight from Washington to Vancouver, Washington. Inside, visitors could see the actual hut and equipment used by the Papanin Expedition, which made scientific observations for nine months on the North Pole ice flow.

According to fair documents:

On the ceiling, on an illuminated map, the routes of the historic transpolar flights of Chkalov and Gromov, the recent flight of Kokkinaki from Moscow to America, and the route of the Papanin drift are shown. Additional exhibits record other heroic episodes and the vast scientific, industrial, and cultural progress in the Soviet Arctic.

The Soviet displays were among the most popular destinations at the fair. But they didn’t triumph for long. They earned a lot of revenue for the fair, but they also earned a lot of displeasure from members of the public who considered the flamboyant structure to be politically insulting to the host country.

Remember “Joe the Worker?” Reaction to him is a good example of what was going on.

Complaints were lodged that Joe was taller than the American flag that flew over the fairground so fair organizers increased the height of the flag. Still, the complaints continued.

Talk about one upsmanship!

Tension between pro Soviet and anti Soviet fairgoers got a lot worse in September of 1939 when Germany launched an invasion of Poland, The Polish contingent shrouded its display in black, and the status of the Russian Pavilion came into question.

Stalin and Hitler had signed a non-aggression pact just a month before the invasion, an action that many said made the Soviets complicit in the events that triggered the Second World War.

the government of the Soviet Union does not intend to participate in the NY World’s Fair of 1940.

The Soviets were too busy, I guess, because at this time, they were staging an invasion of Finland.

Soon the USSR Pavilion disappeared from the Fair. Stalin’s bust was taken down, the transpolar plane was dismantled, and “Joe the worker” was taken apart piece by piece and loaded on a ship headed back to the Soviet Union where he would be reconstructed. The site was taken over by a space called the “American Common.”

After a short period of time, cooperation between Germany and the USSR began to deteriorate. The Soviet Union switched sides and became an ally of United States. But the two never really trusted each other and as soon as the war was over a new — and even more intense — Red Scare was on the horizon.