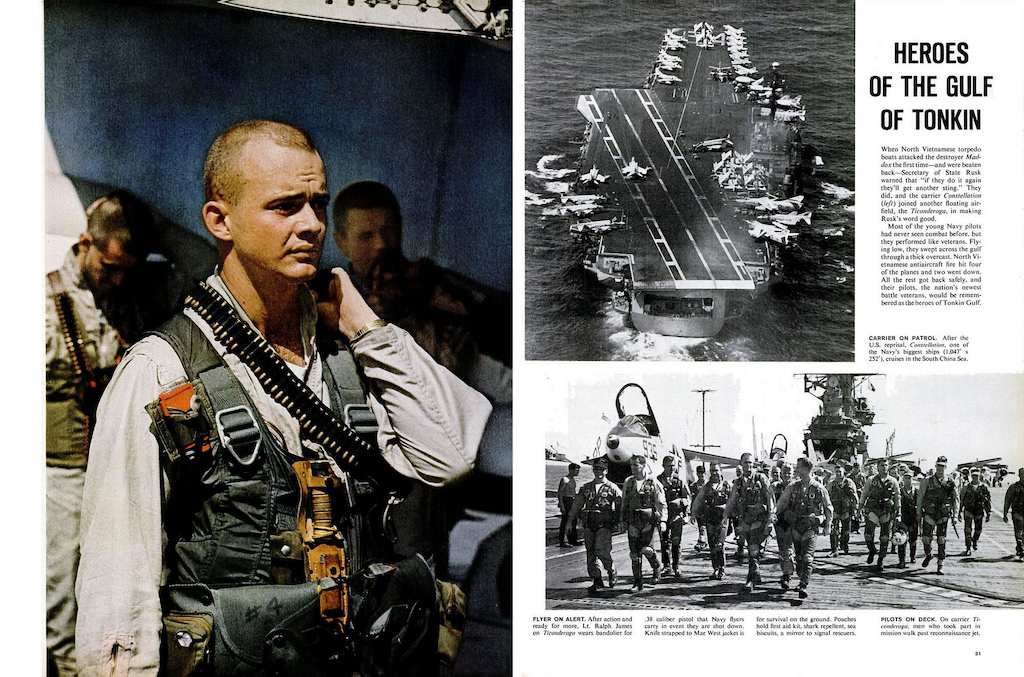 In early August 1964, what became known as the Gulf of Tonkin incident hit the news. At the time, most Americans were aware that there was a growing conflict in Vietnam, but they’d been told that the US presence was limited to a small number of military advisers.

In the context of the Cold War, the public knew that the northern part of Vietnam — the part bordering China — was communist. The southern part of the country (supported by the US)  was anti communist.

The American president, Lyndon B. Johnson, assumed that North Vietnam wanted to force the whole country into unification under communist rule.

An insurgent guerilla force, the National Liberation Front (NLF) or Vietcong, had arisen in South Vietnam.  Fully supported by North Vietnam, they cast themselves as a populist front, established to throw off South Vietnam’s US backed military government.

In the US Congress, a bipartisan consensus anticipated that South Vietnam (and the world) needed American help in preventing the spread of communism.

On August 4, 1964, President Lyndon B. Johnson went on live prime time TV to announce what he called an unprovoked attack on two US ships off the coast of Vietnam. He said that the attacks, occurring in rapid succession “on the high seas,” had been mounted by North Vietnam. He assured the nation that he would treat any further unprovoked aggression by North Vietnam as a cause for military retaliation, but went on to say that he had no desire for war in Southeast Asia,

What was Johnson really up to?

Well, in the summer of 1964, Johnson was running for president — the office he had assumed after the Kennedy assassination. His Republican challenger Barry Goldwater was calling him “soft on communism.” Goldwater was also calling for increased US military involvement in Southeast Asia. Therefore, months before the Gulf of Tonkin incident, the Johnson administration had secretly drafted a congressional resolution for stepping up military action in Vietnam.

After the Gulf of Tonkin incident, Johnson implemented a new policy to bring the communist government in Hanoi, North Vietnam’s capital, to the negotiating table by force.

Barry Goldwater faded into the background when LBJ won the 1964 election by the largest popular mandate to that point in American history.

Three years after the Gulf of Tonkin incident, in 1967, the United States was bogged down in a full scale war in Vietnam. However, disturbing facts had arisen about what really happened on the “high seas” in 1964.

American support for the war soon eroded. Daniel Ellsberg began investigating. He discovered that without telling the American people or the Congress, United States presidents had been pursuing a wide range of covert military actions in Vietnam since the 1950s. He made the story public in 1971 when he leaked what came to be known as the Pentagon Papers to the New York Times and the Washington Post.

Much of the material in this post is drawn from Lawrence O’Donnell’s book on the 1968 elections, Playing With Fire.

You can read The Pentagon Papers here.

Those of you who like to pick up some knowledge the easy way will enjoy the 2017 movie, The Post. The trailer is below.