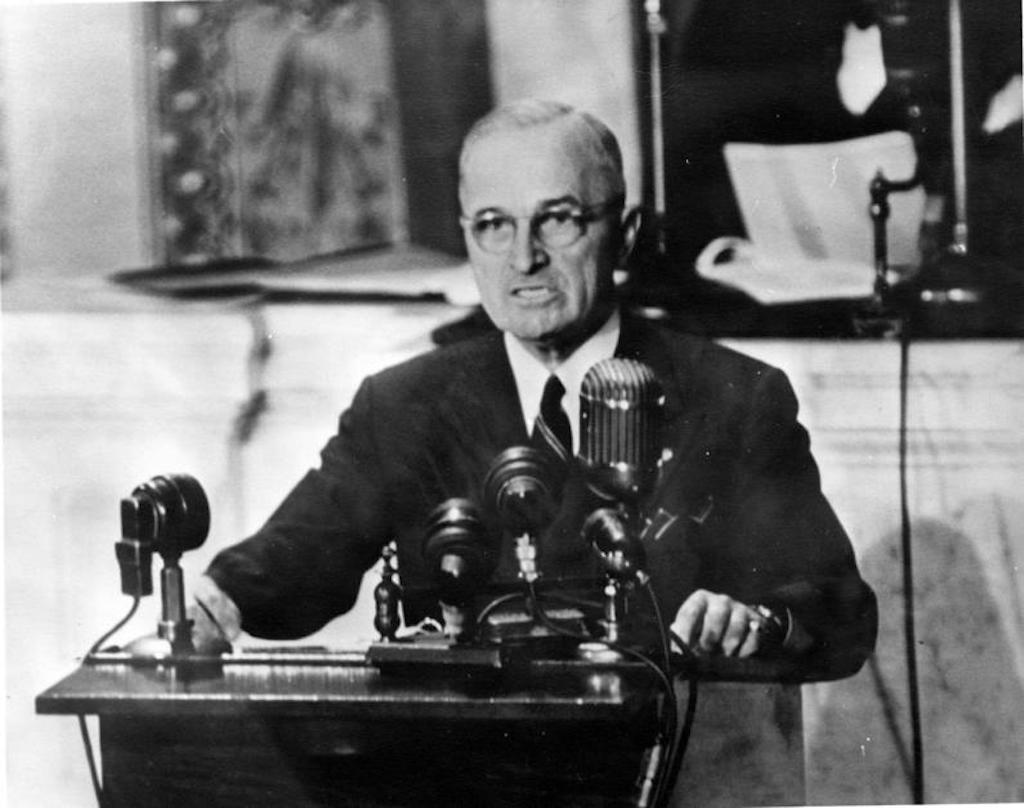 President Truman made a dramatic address on March 12, 1947, to both Houses of the US Congress. In the speech (known as Truman’s Declaration of Cold War), the president asked Americans to join in a global commitment against communism. He asked for $400 million in emergency aid and for the right to send US troops to administer reconstruction and train local forces in Greece and Turkey. These measures were necessary, he said, to save those countries from imminent Communist takeover. The Truman administration feared that the Greek Communists would align Greece with the Soviet Union.

The president said the US had no choice but to step in with an extensive program of economic and military assistance:

I believe that it must be the policy of the United States to support free peoples who are resisting attempted subjugation by armed minorities or by outside pressures.

This became known as the Truman Doctrine. It appeared to apply globally, not only to southeastern Europe.

Congress, in an unprecedented show of bipartisan responsibility, voted an aid program for Greece and Turkey in May. The congressional action confirmed the end of Britain’s role as a dominant world power and the beginning of America’s role as principle guardian of the postwar peace. It also set forth the basic postwar philosophy of containment of Soviet aggression. (For more on containment, see Letter C.) Senator J. William Fulbright declared:

More by far than any other factor the anti-communism of the Truman Doctrine has been the guiding spirit of American foreign policy since World War II.

Noted historian Walter LaFeber says the Truman Doctrine was a milestone in American history for at least 4 reasons:

1) It marked the point at which Truman used the American fear of communism both at home and abroad to convince Americans they must embark upon a Cold War foreign policy;

2) Congress gave the President great powers to wage the Cold War as he saw fit;

3) For the first time in the postwar era, Americans massively intervened in another nation’s civil war; this intervention was justified on the basis of anticommunism;

4) Truman used the doctrine to justify a gigantic aid program to prevent a collapse of the European and American economies; later such programs were expanded globally.

The Truman Doctrine became an ideological shield behind which the US marched to rebuild the Western political-economic system and counter the radical left. From 1947 on, any threats to the Western system could be explained as communist-inspired, not as problems arising from difficulties within the system itself.

Watch the speech in its entirety below.