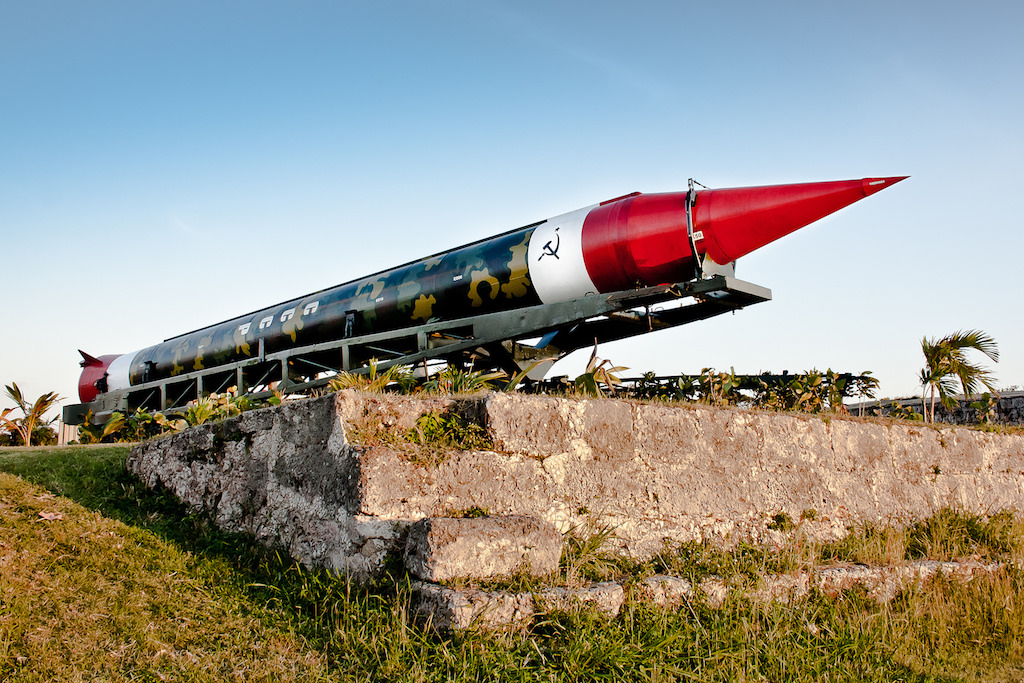 The 1960s begin with attention centered on the U-2 spy incident. You can read all about that here.

1961 is also busy. President Eisenhower leaves office with a memorable speech, and JFK takes office. One of his first actions was the disastrous Bay of Pigs. You can read about these events here.

Oct. 16, 1962 – Oct. 28, 1962: The Cuban Missile Crisis begins. It ends nearly a  month later when President Kennedy and Premier Khrushchev agree that the Soviet missiles and troops than have been sitting in Cuba would be withdrawn.

May 1, 1963: Cuban Premier Fidel Castro pays his first visit to Moscow.  He attends the annual May Day parade, and stands on the reviewing stand on top of Lenin’s Tomb at the side of Khrushchev. The latest Russian missiles are presented at the parade.

June 8, 1963: Washington and Moscow agree to implement a hot line between the two seats of government, to be used only in emergency situations to prevent “accidental war” or “war by miscalculation.” The hot line becomes a staple in such films as Fail Safe and Dr. Strangelove.

July 25, 1963: A limited test ban treaty is initialed in Moscow by the US, England, and the USSR.

November 22, 1963:  JFK is assassinated during a motorcade in Dallas. Lee Harvey Oswald, a self-employed and, possibly, self-employed operative for the USSR and Cuba, is arrested for the crime, but is himself assassinated by Dallas club owner Jack Ruby before he can be properly interrogated.

December 2, 1963: On behalf of the Atomic Energy Commission, President Lyndon Johnson presents a $50,000 check, along with a gold medal and a citation, to J. Robert Oppenheimer. He earlier had been classified a security risk by the AEC because of his ties to Communist organizations, and banned from further work for them.

December 16, 1963: The US Court of Appeals reverses the year-old conviction of the Communist Party for failure to register under the provisions of the Internal Security Act. In essence, the court agreed with the officers of the CPUSA who complained that registering was by definition an act of self-incrimination, since the CPUSA had been defined as “a criminal conspiracy.”

March 1964: Playboy ppublishes its pictorial, Girls of Russia and the Iron Curtain, signaling (according to one reader’s letter, published a few months later) a major thaw in the Cold War.

October 15, 1964: While on holiday near the Black Sea, Khrushchev learns that he is out of a job. The Presidium has decreed that Leonid Brezhnev (as first secretary) and Alexis Kosygin (as premier) will succeed him. It is the end of an era.

August 20-21, 1968: Czechoslovakia, now under the liberal guidance of Alexander Dubcek, is invaded by Russian forces.