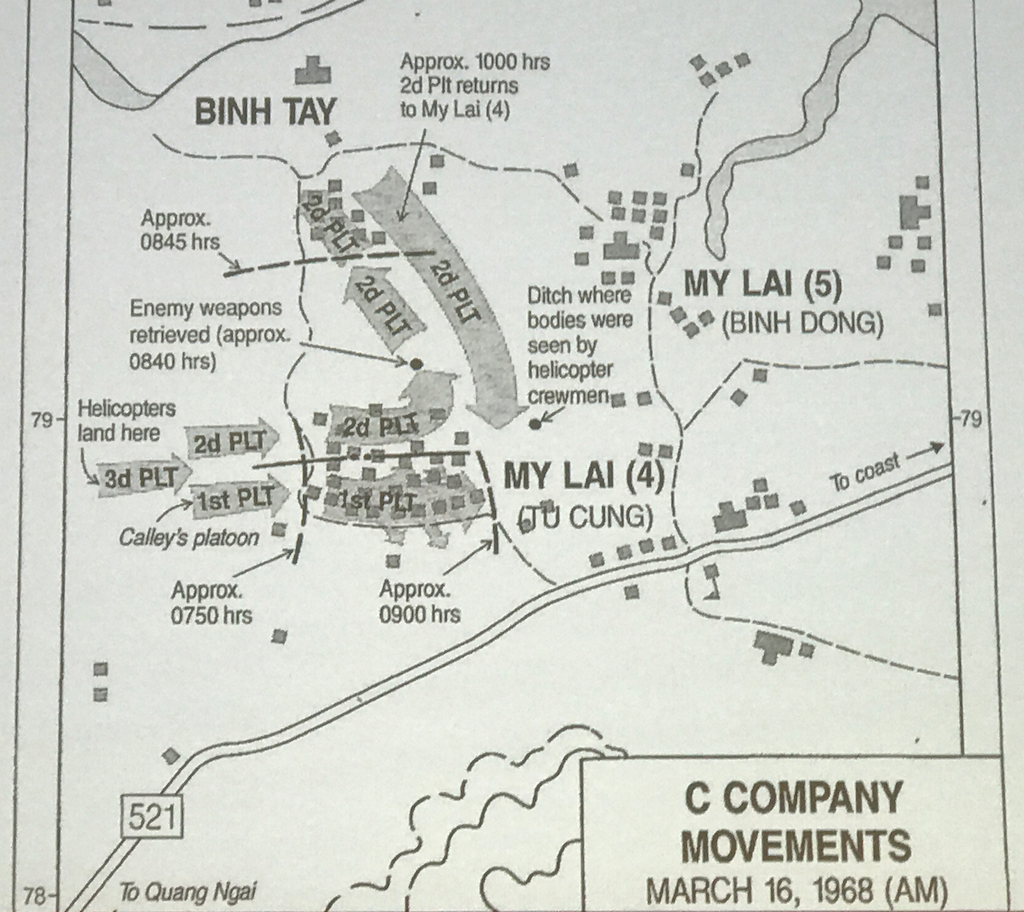 What is the legacy of the My Lai Massacre as we mark the 50th anniversary of that tragic event?

I’m certainly not an expert on war crimes but recently I attended an all day conference on the slaughter at My Lai (Vietnam) that left me shaken. I knew about the massacre, of course, having lived through the 1960s and their aftermath. But there was much that I was unaware of, including many details surrounding the killing of 503 women, children, and old men in that Vietnamese village.

Rather than rehashing old arguments, this post is meant to provide a list of facts, items that are no longer contested. These lessons of history are drawn from an essay titled My Lai: An American Tragedy written by William George Eckhardt, a Chief Prosecutor in the My Lai Cases.

Importantly, there are parallels to the divisions in the United States today, As Professor Douglas Pike (deceased), former Director of Indochina Studies at the University of California, has stated:

The division in our own country, driven by political beliefs, saw one side which was too quick to criticize and another side that would refuse to admit that there was a problem or to even enter into the discussion.

A critical question Is “what happened.” Eckhardt’s answer is as follows.

No one will ever know exactly what happened at My Lai on March 16, 1968. The initial cover-up within the Americal Division; the lack of a timely investigation; the absence of physical forensic evidence; the disparity in culture, education, and politics between victims and perpetrators; and the pollution of politics, cause, and national honor make definitive recreation of events impossible.

Eckardt goes on to say, however, that there are common facts that are undeniable and largely undisputed. In other words, there is little argument surrounding the basic facts of My Lai.

10 Basic Facts About My Lai:

1. Charlie Company of Task Force Barker, a part of the Americal Division, conducted an operation in Quang Ngai Province in the Republic of Vietnam on March 16, 1968. The area in question was known to the Americans as “Pinkville,” and was thought to be a hotbed of enemy activity. Charlie Company was led by Captain Ernest Medina with Lieutenant William Calley as one of its platoon leaders. The platoon had suffered several casualties from mines and booby-traps, some thought to be planted by civilian Viet Cong sympathizers.

2. The night before the operation Captain Medina briefed his company on the upcoming operation. A significant engagement was expected as intelligence indicators, erroneously as it turned out, pointed to the presence of a Viet Cong Battalion in the village. Although Captain Medina gave quite a pep talk, ordering his men to kill all livestock, to burn all houses, and to pollute the water wells of the village, there is disagreement concerning his reputed order to kill non-combatants.

3. Charlie Company was helicoptered into the area at 7:30 on the morning of March 16, 1968. Many of the villagers were eating breakfast. For all practical purposes, there was no resistance. During the next three hours, houses were burned, livestock were killed, and women were raped and sexually molested. Groups of villagers were assembled and shot. Especially large groups of bodies were located in a ditch and beside a trail. In all, approximately 503 non-combatants died.

4. Captain Medina remained on the outskirts of the village so that he could effectively control the operation. No evidence placed him at the site of any of the group killings. His Vietnamese interpreter begged him to stop the killings since he had the ability to communicate with his subordinates, and they with him. When he came upon a group of bodies on a trail, he ordered a cease-fire that was obeyed. Only a small number of the soldiers participated in the misconduct. However, those soldiers on the ground who did not participate did not protest or complain.

5. In step the heroes!  Warrant Officer Hugh Thompson and his crew — Specialists-Four Larry Colburn and Glenn Andreotta — were circling overhead in a helicopter. They became alarmed and outraged when they realized that Vietnamese civilians were being killed. Hugh Thompson landed his helicopter and ordered his two crew members to cover him as he confronted the platoon leader, Lieutenant Calley. Thompson and his men saved civilians who were in a bunker, carried a wounded child to the hospital, and protested to their superiors. Their efforts resulted in the issuance of a cease fire order from higher-ups.

6. Over a year after the incident, a former soldier, Ron Ridenhour, heard about the happenings and wrote an articulate letter to various government officials. You can read the full letter here.  The public was not aware of the incident until after an official Army investigation when Lieutenant Calley faced formal charges and he journalist Seymour Hersch reported the incident. You can read his expose here.

7. News media reports riveted (and polarized) America. Time Magazine placed Lieutenant Calley on its cover with the caption: “The Massacre: Where Does the Guilt Lie?”

8. Lengthy investigations, hearings, and trials followed. Lieutenant General William R. Peers was appointed to conduct an inquiry into the incident and its probable causes. His report is a classic government White Paper. You can access the report here.  Testimony before the House Armed Services Committee was given a congressional classification and was not released prior to the trial.

9. The trials that followed were military courts-martial because the accused were soldiers and the Congress placed “war crimes” exclusively in the military criminal code. Although My Lai was not technically a war crime, what occurred there clearly fell within the list of crimes specified by Congress in the Uniform Code of Criminal Justice — murder, assault, rape, larceny, among others. These were the crimes chosen for prosecution.

10. In all, some thirty individuals were accused of “commission and omission.” Charges were preferred against 16, 5 were tried, and one — Lieutenant Calley — was convicted. Charges against 12 others were dismissed prior to trial.

Though many aspects of My Lai remain murky and unsettling, there is an overarching legacy, a positive note to end on. This Washington Post headline says it all: “30 Years Later, Heroes emerge from Shame of My Lai Massacre.” Here are the details.

On March 6, 1998, at the Vietnam Memorial in Washington DC, the United States Government presented the Soldier’s Medal (the highest award for bravery not involving conflict with the enemy) to Hugh Thompson and his two gunner assistants, Larry Colburn and Glenn Andreotta (posthumously).

The President of the United States of America, authorized by Act of Congress, July 2, 1926, takes pleasure in presenting the Soldier’s Medal to Warrant Officer One (WO-1) Hugh C. Thompson, Jr., United States Army, for heroism above and beyond the call of duty as Pilot of an OH-23 Raven Observation Helicopter of the 123d Aviation Battalion, Americal Division, on 16 March 1968, while saving the lives of at least 10 Vietnamese civilians during the unlawful massacre of noncombatants by American forces at My Lai, Quang Ngai Province, South Vietnam. Warrant Officer Thompson landed his helicopter in the line of fire between fleeing Vietnamese civilians and pursuing American ground troops to prevent their murder. He then personally confronted the leader of the American ground troops and was prepared to open fire on those American troops should they fire upon the civilians. Warrant Officer Thompson, at the risk of his own personal safety, went forward of the American lines and coaxed the Vietnamese civilians out of the bunker to enable their evacuation. Leaving the area after requesting and overseeing the civilians’ air evacuation, his crew spotted movement in a ditch filled with bodies south of My Lai Four. Warrant Officer Thompson again landed his helicopter and covered his crew as they retrieved a wounded child from the pile of bodies. He then flew the child to the safety of a hospital at Quang Ngai. Warrant Officer Thompson’s relayed radio reports of the massacre and subsequent report to his section leader and commander resulted in an order for the cease fire at My Lai and an end to the killing of innocent civilians. Warrant Officer Thompson’s heroism exemplifies the highest standards of personal courage and ethical conduct, reflecting distinct credit on him, and the United States Army.

Those of you who want to learn more may want to watch one or both of the following documentaries. BEWARE! These films are not for the faint of heart.