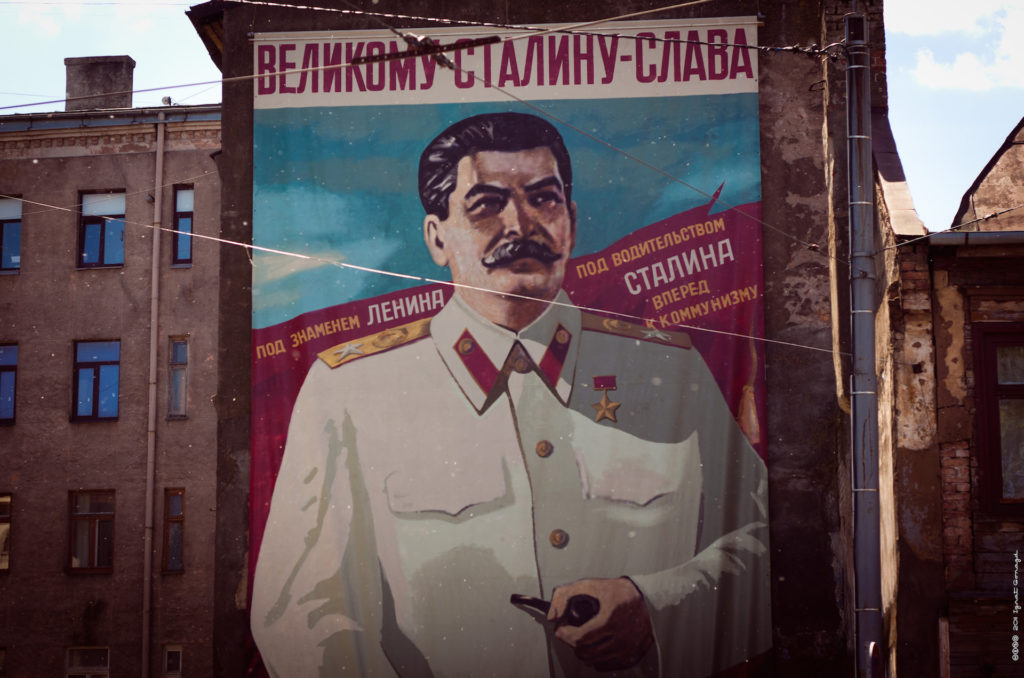 Stalin’s compulsion to protect Russian interests dictated his actions. He was determined to prevent foreign domination of territories contiguous to his nation’s borders. Stalin’s obsession is not difficult to understand given Soviet losses in World War II.

According to Bruce R. Kuniholm, the United States suffered 291,557 battle deaths and the British 373,372. The Soviets, on the other hand, lost in the neighborhood of 11,000,000 military personnel and 7,000,000 civilians. Seventy thousand villages and 1,710 towns were reduced to rubble.Fearing foreign encroachment, as early as February 1946, Stalin described a ‘capitalist encirclement of the Soviet Union’ and depicted the capitalist economy as ‘setting the stage for war.’

Stalin’s comments were analyzed by George Kennan in what became known as the “long telegram.” In this 8,000 word cable dated February 22, 1946, Kennan speaks of Russia’s insecurity and of her persistent efforts to extend her borders. He recommends that the United States adopt a “policy of containment.” Containment strategy was first used in the Iranian crisis of 1946.In sum, while the Soviets were committed to defending themselves against potentially hostile interests in China and a resurgent Japan, American leaders were concerned with expanding their economic markets and rebuilding Japan as a thwart to Soviet expansionism.

A strong, stable China was the cornerstone of American postwar Far Eastern policy. In fact, the Americans believed that China would take Japan’s place as the West’s prime Asian commercial partner.

When the Russians abrogated their Sino-Soviet treaty obligations, and allowed arms and ammunition to fall into the hands of the CCP, President Truman attempted to help the Nationalists by moving 100,000 American troops into China. However, as LaFeber notes, it soon became apparent that “If Americans tried to save Chiang they would ‘virtually [have] to take over the Chinese government.’”

By February 1949, the Nationalists had lost nearly half their troops, mostly by defection. Eighty percent of the American equipment given Chiang had fallen into Communist hands.

In effect, Stalin held Manchuria hostage. Buhite argues that the province was “the most important area of China,” containing the country’s only “nearly developed industrial complex,” and was “the only CCP source for the machinery required for industrial development.”

So far as American interests in China were concerned, since Communist China could not achieve economic progress without Manchuria, Mao had no flexibility for a rapprochement with the United States.

The Soviets successfully influenced the Chinese Communists using material and technical aid as leverage. The pattern of assistance employed in Manchuria would be replicated repeatedly during the half century Cold War as the Soviets expertly allocated economic and military aid to the less developed world in their attempts to broaden their sphere of influence.

Importantly, with Mao’s final victory in 1949, over a million KMT government and army personnel were forced to flee their homeland, most of them settling in Taipei on the island of Formosa (Taiwan).

Meanwhile, a Western campaign for the military encirclement of the Soviet Union known as “the containment of international communism” had begun.