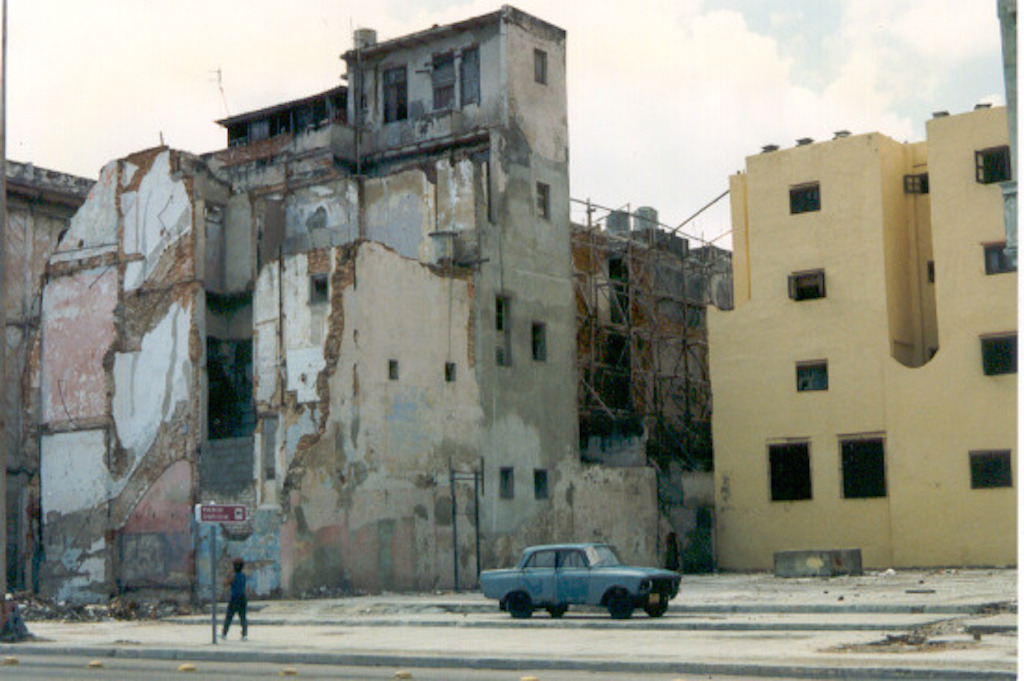 The attention of Havana’s planners in the  early 1970s turned to urban slum areas.

The inner city had suffered considerable decay in the 1960s and much of Havana’s housing stock was in substandard condition.

One such area was Cayo Hueso, a neighborhood bordering the downtown commercial area of Centro Havana where Cuba’s first major urban development project took place. This area was composed of old rundown buildings that lacked the historic value of those of Old Havana.

The project was ambitious. The first buildings were five story walk-ups, but later twelve to sixteen story towers were erected when high-rise construction was deemed necessary to allow decent sized  units for each family as well as provide additional open space and needed community facilities.

In all areas of the city, housing deterioration often resulted in displacement, especially in cases of emergency removal from hazardous buildings. Since families had to be relocated before demolition and rebuilding could begin, progress was slow.

As the 1970s progressed, “the number of families living in shelters for such reasons reached crisis proportions.” Fewer and fewer relocation units were available as emigration slowed markedly throughout the decade.

When the outflow picked up again in 1980, vacated dwellings were allocated (with local CDR approval) to people living in shelters.

After 1976, a sizable share of construction went to Havana where land scarcity discouraged extensive private building and the government assumed major responsibility for providing housing to promote high densities.

Subsequently the role of the microbrigades was called into question when housing analysts observed that the majority of new units were still privately built.

At about the same time, the establishment of local units of People’s Power, poder popular,  came into existence.

When these units were assigned the task of distributing construction materials allowed by the central government, public involvement in housing decisions became more widespread.

Despite concerted effort, however, by 1985, 61 shantytowns remained in Havana and a substantial number of people lived in substandard buildings threatened by collapse.