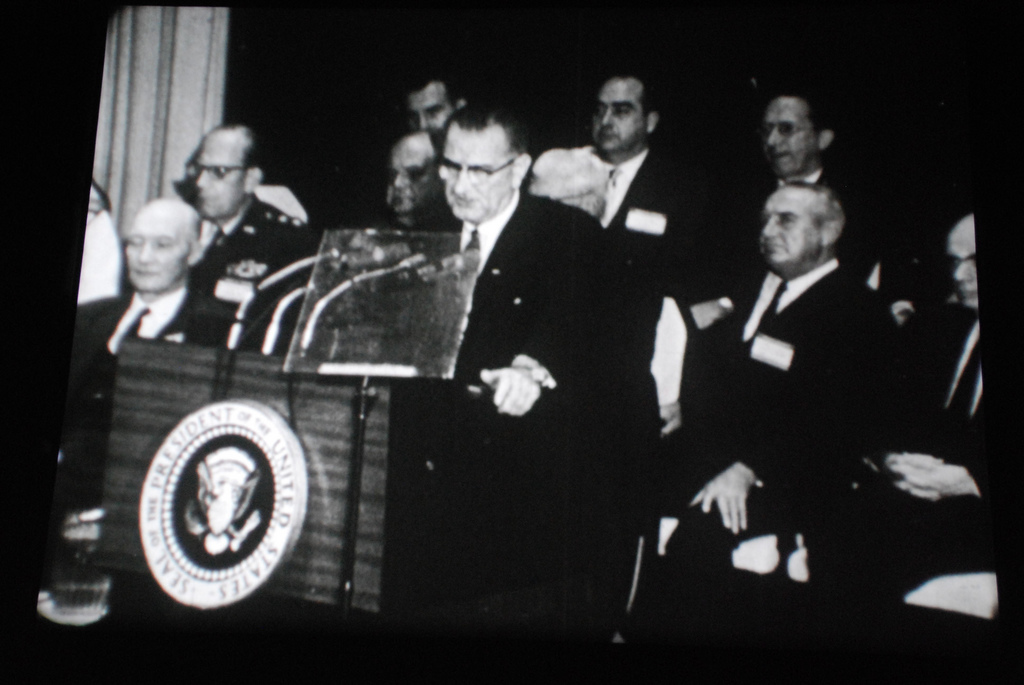 Emile de Antonio (1919-1989) was a radical American documentary filmmaker during the Cold War years, specializing in political documentaries that cobbled together television footage, interviews, and other audio-visual material to argue his point. In a career spanning more than three decades, he covered such subjects as the McCarthy hearings, the assassination of JFK, the Vietnam War, and the character of Richard M. Nixon. In the process he found himself under surveillance by the FBI, and he was subpoenaed by the Justice Department.

According to The Brooklyn Rail, De Antonio aimed to educate, agitate, and provoke with his films. His objective was to provide a counter-hegemonic critique of the power structure, ranging from scathing rants against the power elite to documentaries about social actors ofter excluded from the mainstream media.

Rather than simplistic and brief snapshots of historical events, like television coverage during the Vietnam War, De Antonio acknowledged the discontinuities, ruptures, and ambiguities that make up the reality of the historical process. His films undermine a single version of history and create an alternative narrative more open to multiple interpretations.

The Emile de Antonio Collection at the Wisconsin Center for Film and Theater Research is the most comprehensive personal collection of an independent filmmaker working in this period of cinematic and political rebellion.

Here are four of De Antonio’s most famous films.

Underground (1976)
With excerpts from works by Chris Marker, Third World Newsreel, Jane Fonda’s Indochina Peace Campaign, and others, Underground serves as a double-barreled time capsule. We see deep into the interior of the Weather Underground and broadly sample the texture of documentaries of dissent.

Largely comedic, and a not entirely unsympathetic characterization, Emile de Antonio’s portrait of Richard Millhouse Nixon was a surprising departure from his previous work. As the film satirizes Nixon’s manipulative side, it also reveals a resourceful Horatio Alger figure, a “poor boy from the lower middle classes with burning desire and energy,” stated de Antonio.

Point of Order! (1963)
After its successful debut at the first New York Film Festival, Point of Order! got a distribution deal (and an exclamation point). Rookie director de Antonio and his producer abstained from watching CBS’ one hundred and eighty-eight hours of kinescopes showing the 1954 Army–McCarthy senate hearings, and then spent three years culling the footage down to ninety-seven minutes.

Mr. Hoover and I (1989)
This autobiographical swansong (released only months before Emile de Antonio’s death) captures his political voice via a personal profile, and simultaneously assaults the legacy of J. Edgar Hoover, who compiled a 10,000-page FBI dossier on the filmmaker. The screening is followed by a conversation with Donna De Salvo, Douglas Kellner, and Mary Lampson. Available on Netflix.

You can learn more about Emile de Antonio and his films in the Randolph Lewis book. Click on the image below to buy it now on Amazon.