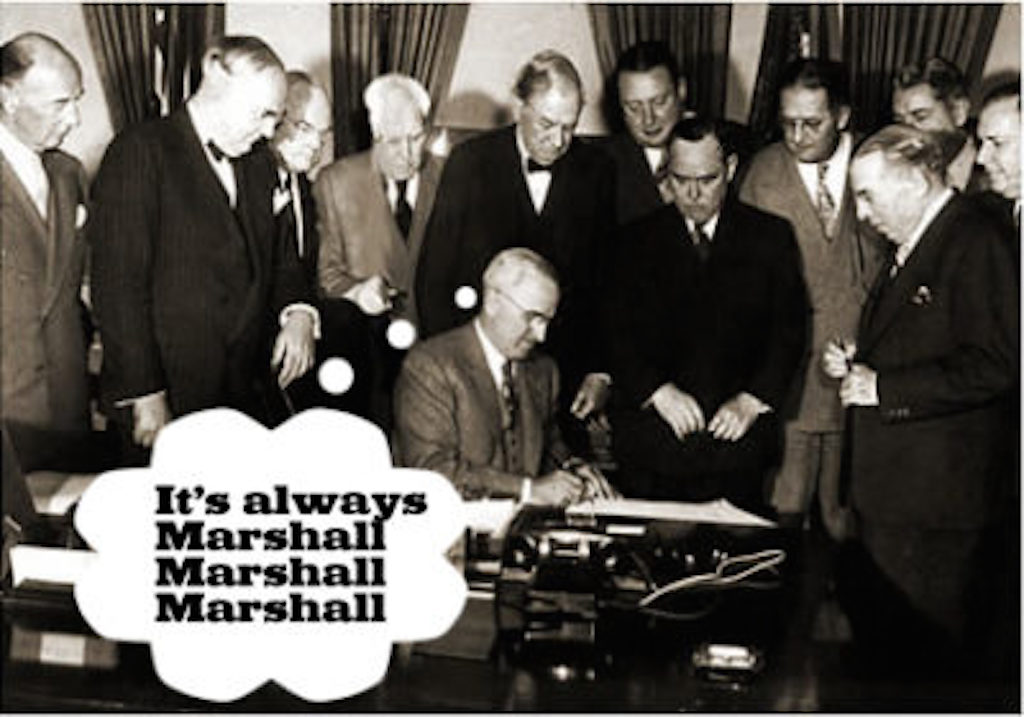 The Marshall Plan for the recovery of Europe was formally unveiled in a speech given by US Secretary of State, General George C. Marshall, at Harvard University on June 5, 1947. The speech was a natural outgrowth of the Truman Doctrine.  Suffice it to say, the Truman administration used the American fear of communism both at home and abroad to convince Americans they must embark upon a Cold War foreign policy. Most importantly, Truman and Marshall used this fear to justify a gigantic aid program designed to prevent a collapse of the European and American economies. Later such programs were expanded globally.

The question of Russian participation in the plan was uppermost in many minds. Although the Soviet bloc was invited, the State Department made Russian acceptance improbable by demanding that the economic records of each nation be open for scrutiny. It was also suggested that, despite their devastated economy, the Soviet Union should ship goods to Europe. The Russians, on the other hand, wanted to extract reparations from Germany. Still, the Russians gave the plan serious consideration. They even ordered their East European satellites to be prepared to join the plan. Eventually, though, the Russians revolted, warning that the plan would undermine national sovereignty, revive Germany, allow America to control Europe, and divide Europe into two groups of states. They saw the plan as a way for the US to infiltrate the Soviet Union and its sphere of influence in order to destroy it.

In the end, 16 European nations designed a program for US Secretary of State George Marshall to consider, and the US embarked on a controversial program to quickly revive Germany.

The Europeans proposed a 4 year program of $17 billion of American aid. At Soviet insistence, no Eastern European nations were participants. Poland, Romania, Yugoslavia, Bulgaria, Albania, Hungary, and even Finland rejected the invitation. ( In retrospect, this has been defined as the moment when the Soviet boot crushed the face of Eastern Europe.)

Want to learn more? Check out our podcast on The Truman Doctrine and the Marshall Plan.