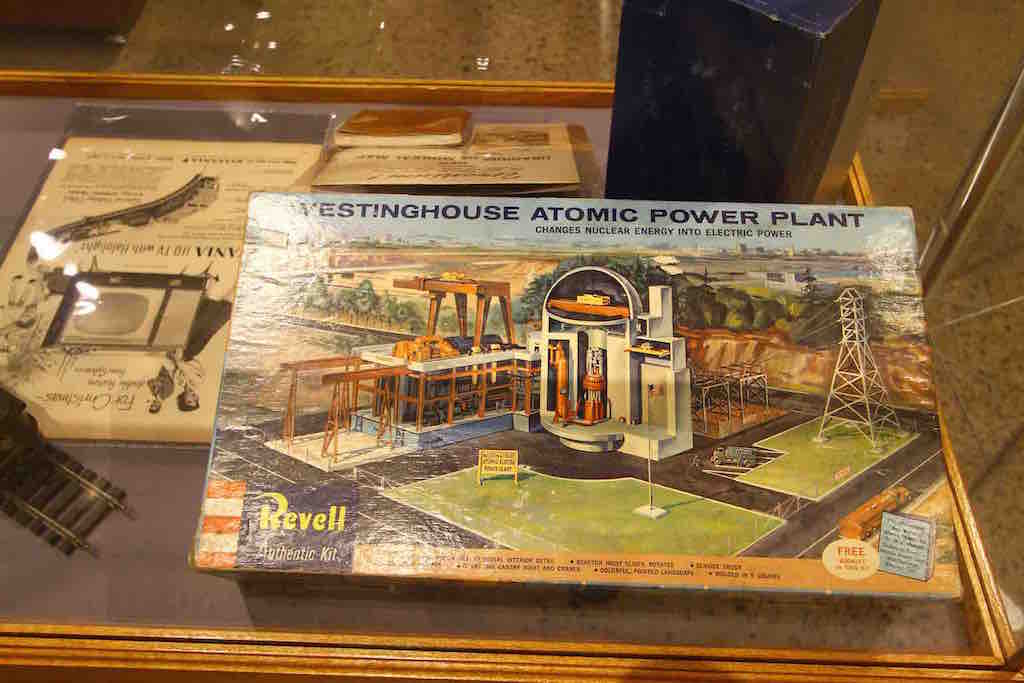 Not all boys’ toys had to do with cowboys, astronauts, and soldiers. A large group of playthings were designed to prepare boys to fight the wars of the future — the wars of the nuclear age.

According to Ann Marie Kordas in her book The Politics of Childhood in Cold War America:

Most of the atomic-themed toys, games, and science kits manufactured in the early 1950s focused largely on the beneficial or at least fantastic uses of nuclear energy. At a time when the United States still felt assured that its command over the power of the atom far surpassed that of its enemies, atomic energy could be considered an appropriate subject for harmless play. By the late 1950s and 1960s, however, following the Soviet Union’s development of satellite technology and intercontinental missiles and build-up of its nuclear arsenal, toys and games no longer reflected peaceful hopes for nuclear energy. Fewer atomic-themed toys were produced and those that were took a grimmer approach to the subject.

Atomic board games were popular. One was the Nuclear War board game described as a ‘comical cataclysmic card game of global destruction’.  The game ended when the populations of all nations but one had been destroyed in a nuclear holocaust. Sometimes all nations were destroyed.

There were also other types of disturbing games focusing on thoughts of actually releasing nuclear weapons. Some companies marketed guns described as ‘atomic guns’, ‘space guns’, or ‘atomic disintegrators’.

For kids who truly intended to wreak havoc, one company marketed a toy described as a ‘safe, harmless, giant atomic bomb.

Other toys were more educational and peaceful. Here are a few:

The Atomic Geiger Counter produced by Bell Products Company: resembled a real Geiger counter, but was designed to respond to anything made of iron. Intended for educational purposes, the Geiger Counter was ‘completely safe’ and didn’t detect uranium or any other radioactive ore.

The A.C. Gilbert Company Geiger Counter: detected radioactive substances and came with a small bottle of uranium ore with which children could test the machine.

Wilesco R200 RS toy nuclear reactor: the tower of the reactor was colored gun-metal grey and the energy produced powered a small turbine; generated power by using steam to power turbines and did not contain any radioactive materials.

Linemar toy nuclear reactor: the reactor was colored baby blue and bright red lights flashed on the tower’s reactor when the toy was in operation; generated power by using steam to power turbines and did not contain any radioactive materials.

Gilbert’s U-238 Atomic Energy Lab: costing $50, the kit included a Geiger-Mueller counter; a Wilson cloud chamber; a spinthariscope; an electroscope; radioactive ores; alpha, beta, and gamma radiation sources, and several booklets on atomic energy and how to conduct experiments.

Comic books also instructed children in the basics of atomic power and allowed them to fantasize about its potential uses.

General Electric’s Inside the Atom focused on the peaceful process of generating electricity through the use of nuclear power.

Adventures Inside the Atom

Dagwood Splits the Atom also took a positive approach to the subject; it was distributed in some schools in an effort to teach kids about atomic power by using a popular comic strip character.

Learn How Dagwood Splits the Atom

Atomic Knights celebrated the adventures of a group consisting of a teacher, a scientist, former soldiers, and one lone woman who travelled across a hydrogen bomb-ravaged United States righting wrongs and combatting evil.

Even kids who didn’t want to play with atomic themed toys or read atomic comics were confronted with the need to prepare for an atomic attack and its aftermath. Parents were told to take special steps to prepare for their children’s welfare in the case of nuclear emergency.

To entertain children, experts on survival recommended that parents store comic books and board games. And children could envision life after an atomic blast by playing with doll houses with fallout shelters like the one below.

Lessons in what to do in the event of a nuclear attack were delivered both at home and in school. Films such as Duck and Cover (1951) emphasized that nuclear bombs were dangerous, but the danger was minimized by comparing it to everyday dangers like fires and cars.

All other photographs courtesy of orau.org. They have a wonderful website if you’d like to delve more deeply into “atomic toys.”