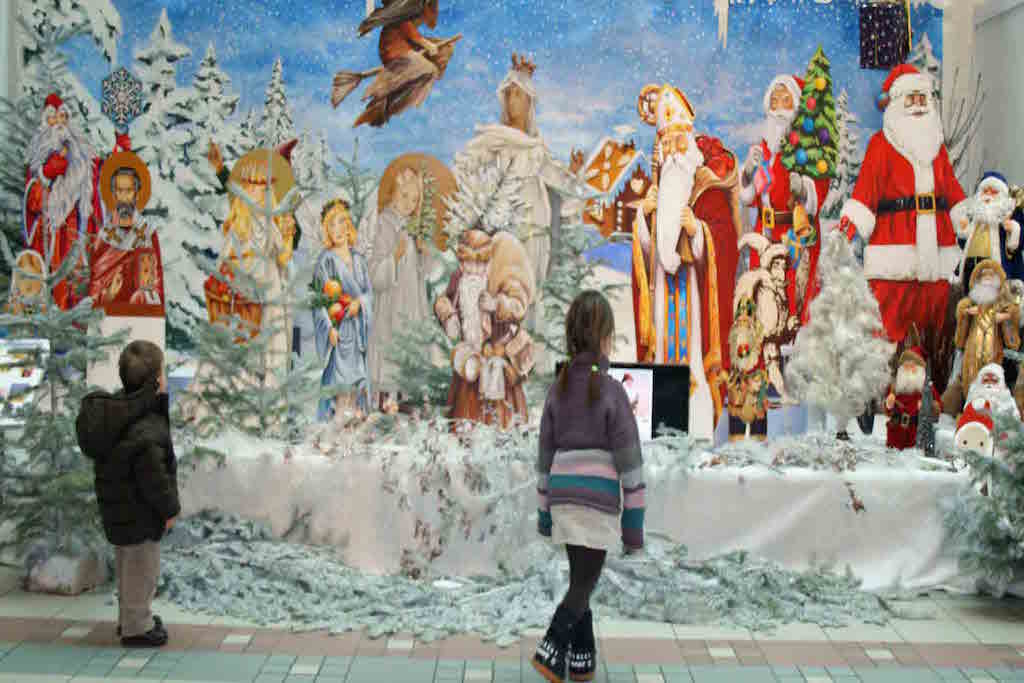 Most Americans during the Cold War so demonized the Soviets that it was hard for them to visualize Russian families around a Christmas tree opening presents just like in the US. This was a big mistake because, according to Chinese propaganda, even Lenin celebrated Christmas.

Lenin at Christmas as depicted in Chinese Propaganda

After the 1917 October Revolution, Christmas was abolished in the newly established Soviet Union. The victorious revolutionary regime replaced the traditional Russian Orthodox religious holiday with a New Year celebration, which under the Russian calendar occurred 6 days earlier than the traditional Russian Christmas. Christmas trees were banned as well as the joyous religious celebration itself. Both remained banned until more than ten years after Lenin’s death in 1924.

Finally, on December 28, 1935, a letter to the state newspaper, Pravda, argued for the reinstatement  of some Christmas traditions. The letter, written by one of Stalin’s right hand men, Pavel Postyshev, suggested eliminating

the absurd view that the children’s tree is a bourgeois prejudice . . .

He went on to say:

organize a fun New Year celebration for children and put on a good Soviet tree in all cities and farms!

By the beginning of the Cold War era, almost every Soviet home boasted a “New Year Fir Tree.” A fully secular icon of the New Year holiday, the tree’s crowning star was regarded not as a symbol of the star of Bethlehem, but as the Red Star.

Decorations and ornaments included airplanes, bicycles, space rockets, cosmonauts and characters from Russian fairy tales. One of the characters celebrated was Ded Moroz or Old Man Frost, a Slavic fictional character similar to Father Christmas. Grandfather Frost (as he is more commonly known) predates Christianity as a Slavic wizard of winter. In Slavic mythology, Frost (or Morozko) is a snow demon. The image of Ded Moroz took its current form during Soviet times, becoming the main symbol of the New Year’s holiday that replaced Christmas.

You might think that Santa Claus would be welcome the world over, but this isn’t the case. In a 2008 article in Britain’s Daily Mail, Speaker of the Russian Parliament, Boris Gryzlov, claimed that Father Christmas was an ‘imposter’ and an ‘illegal immigrant’. He insisted that the only authentic figure for bringing presents to Russia’s children was Ded Moroz – Grandfather Frost. Speaking from Velikiy Ustyug, the traditional home of Ded Moroz in the far north, Gryzlov asserted:

No one will ever be able to take away Ded Moroz from Russia – not Santa Claus nor any other imposters.

Ded Moroz was deliberately adopted by the Soviet state as the communist alternative to Santa — a different and defiantly Soviet seasonal figure. Although he’s popular now, he didn’t always have an easy time of it. In the early years of the Soviet Union, Ded Moroz was banned as a symbol of bourgeois western influence, and also for having religious connotations. He was persecuted under Stalin until, in 1937, the ruler relented, rehabilitating Ded and returning him in triumph to Moscow’s Palace of Unions.

The Grandfather Frost character has its origins in an old folk tale, which goes something like this.

Once there was a woman who had both a daughter of her own, whom she loved, and a stepdaughter, whom she hated. One day, the woman ordered her husband to take her stepdaughter out into the winter fields and leave her there to die, and he obeyed. Morozko finds her there; she is polite and kind to him, so he gives her a chest full of beautiful things and fine garments. After a while, her stepmother sends her father to bring back the girl’s body to be buried, and he obeys. After a while, the family dog says that the girl is coming back, and that she is beautiful and happy.

When the stepmother sees what treasures her stepdaughter has brought back, she orders her husband to take her own daughter out into the fields. Unlike before, this child is rude to Morozko, and he freezes her to death. When her husband goes out to bring her back, the dog says that she will be buried. When the father brings back the body, the old woman weeps. Wikipedia

In some respects, Ded Maroz seems a lot like Santa Claus. But a fear of encroaching Western influences has sometimes led to battles in the streets between Santas dressed in white beards and red coats and Ded Morozes dressed in blue. Aside from dress, there are other differences between the two men.

While Santa Claus (assisted by his elves) delivers gifts on Christmas Eve, traversing the world in  a sleigh led by Rudolph and the other reindeer, Ded Moroz is at home with his feet propped up. He distributes his gifts at the New Year, travelling in a troika – or sleigh – drawn by horses. Some say he  has even been spotted struggling out of the infamous Russian automobile, the Lada. Also, instead of elves, he is accompanied by his attractive granddaughter, the stepdaughter in the old folk tale. The Snow Maiden — or Snegurochka —  as she is now known wears long silver-blue robes and either a furry cap or a snowflake like crown. Ded Moroz wears a heel-length fur coat, a semi-round fur hat, and walks with a long magic staff. He comes through the front door, rather than down the chimney,   shouting out “hello kids” as he enters.

Just like in the West, there are lots of toys — and, of course, seasonal entertainment. Take a look at this Soviet alternative to The Snowman, from 1959.  In it a young boy wants to send a New Year Fir Tree to his father who is away and busy doing good Soviet things in Antarctica.

Today, the Ded Maroz tradition persists. Although the western Santa Claus made inroads during the 1990s, the resurgence of Russian nationalism in the early 21st century brought a renewed emphasis on the Slavic Grandfather Frost, and the New Year holiday continues to outshine the Christmas holiday for a wide majority of the Russian people.

Next in our series: Just Like Mom ( a look at girls’ toys in the early Cold War period).

The Kremlin Star replaces the Star of Bethlehem: Photo by Andrew Koznetsov (Flickr)

For the first article in this series, an overview of the early Cold War toy industry click here.