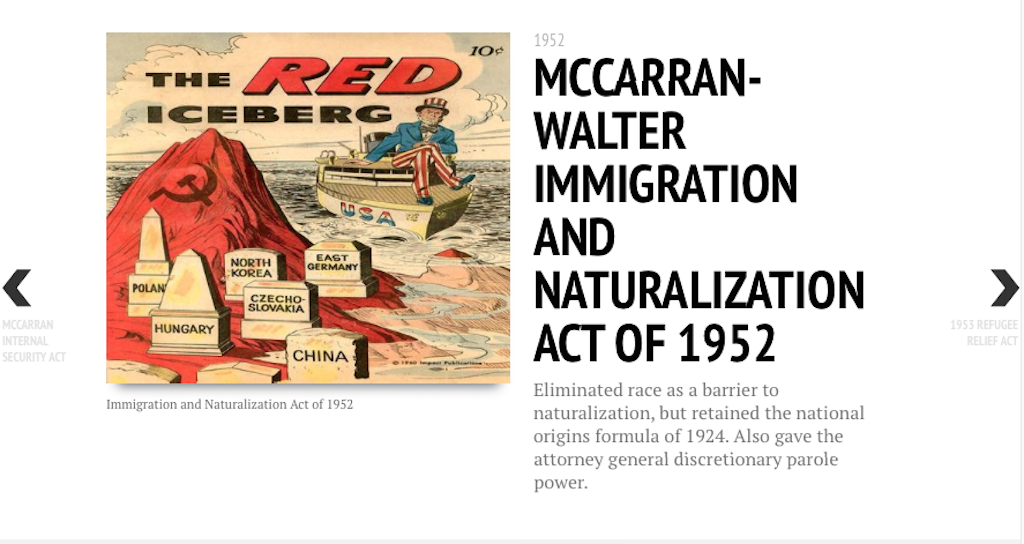 Lately, migrants and refugees have been in the forefront of our headline news. The fact that so many people have been forced to leave their homes because of conflict, natural disaster, or economic circumstance has had a devastating effect on the global community, creating complex humanitarian and development difficulties. Many are wondering, “What is our responsibility to those who have lost everything?” The question is not new, because the political and ideological conflict we call the Cold War created many of the same challenges. Perhaps a look back at US Immigration Policy over time will provide some insight.

What effect did the Cold War conflict have on US immigration policy?

In the immediate aftermath of World War II, the national immigration quotas established in the Johnson-Reed Act of 1924 remained in effect. According to the Office of the Historian at the US Department of State:

The quota provided immigration visas to two percent of the total number of people of each nationality in the United States as of the 1890 national census. It completely excluded immigrants from Asia.

The quotas weren’t altered until 1965, although exceptions were made to traditional policy as need dictated. For example, after months of inaction, just before Christmas in 1945, President Truman issued a directive reserving about 42.000 quota slots for European refugees, known at that time as “Displaced Persons.”

The War Brides Act, enacted on December 28, 1945, allowed alien spouses, natural children, and adopted children of members of the United States Armed Forces to enter the US as non-quota immigrants “if admissible.”  (Japanese and Korean wives of American soldiers were not allowed to immigrate. The Alien Fiancées and Fiancés Act of 1946 extended privileges to Fiancées and Fiancés of war veterans.) More than 100,000 individuals entered the United States under this Act and its extensions and amendments until it expired in December 1948.

A 1947 Amendment of the War Brides Act removed the term “if admissible,” making it possible for Japanese and Korean wives of American soldiers to immigrate.

The Displaced Persons Acts of 1948 (Amended in 1950) brought more than 400,000 European refugees into the United States and expanded the use of voluntary agencies known as VOGAGS (Voluntary Agencies Responsible for Refugees). They included Catholic and Lutheran welfare organizations and the Hebrew Immigrant Aid Association. These groups were able to sponsor refugees, negating the “likely to become a public charge” clause in cases where individuals didn’t have American relatives who could sponsor them. Finally, the US was able to say that it had a refugee policy.

In 1950, the (McCarran) Internal Security Act also known as the Subversive Activities Control Act of 1950 was passed in an attempt to make sure that Communist Agents could not enter the US. It was followed by passage of the McCarran-Walter Immigration and Naturalization Act in 1952. Both were passed over President Truman’s veto.

The McCarran-Walter Immigration and Naturalization Act eliminated race as a barrier to naturalization, but retained the national origins formula of 1924. It also strengthened the government’s ability to denaturalize and deport immigrants associated with subversive groups.

I believe that this nation is the last hope of Western civilization and if this oasis of the world shall be overrun, perverted, contaminated or destroyed, then the last flickering light of humanity will be extinguished. I take no issue with those who would praise the contributions which have been made to our society by people of many races, of varied creeds and colors . . . . However, we have in the United States today hard-core, indigestible blocs which have not become integrated into the American way of life, but which, on the contrary are its deadly enemies. Today, as never before, untold millions are storming our gates for admission and those gates are cracking under the strain. The solution of the problems of Europe and Asia will not come through a transplanting of those problems en masse to the United States . . . . I do not intend to become prophetic, but if the enemies of this legislation succeed in riddling it to pieces, or in amending it beyond recognition, they will have contributed more to promote this nation’s downfall than any other group since we achieved our independence as a nation.

t’s important to note that the word “refugee” doesn’t appear in the 1952 immigration act. Still, an obscure section of the Act gave the attorney general discretionary parole power to admit aliens “for emergency reasons in the public interest.” This allowed the executive branch to respond quickly to emergency situations like the Hungarian Revolt of 1956 and the Cuban Revolution of 1959.

As decolonization spread throughout the world, and the Civil Rights movement gained support in the United States, many Americans began pressing for a more liberal immigration policy. Then Senator John F. Kennedy authored A Nation of Immigrants (published in 1958), espousing the ideological value of a racially neutral immigration policy. You can preview the book here.

Change came in 1965 with the passage of an Immigration and Nationality Act, also known as the Hart-Celler Act. This bill allowed each country in the Eastern Hemisphere an overall quota, with a maximum total for each hemisphere. It also created preference visa categories that focused on immigrants’ skills and family relationships with citizens or US residents. The bill set numerical restrictions on visas at 170,000 per year, with a per-country-of-origin quota. However, immediate relatives of U.S. citizens and “special immigrants” had no restrictions.

Refugees from communism, Middle Eastern violence, and natural catastrophe were considered preference groups and were allotted up to 6% of each country’s annual visa quota. They were expected to number about 17,400 annually.

Even so, the number of refugees admitted was always higher than anticipated since all presidents employed parole authority to exempt hundreds of thousand of refugees, primarily those escaping communist regimes.

More than 2 million refugees were paroled into the United States between 1948 and 1980 so it’s safe to assume that the migration pressures brought on by the Cold War were not being adequately addressed. Here are just two examples:

Between 1962 and 1979, almost 700,000 Cubans fleeing Fidel Castro’s regime were paroled into the United States

The Refugee Act of 1980 increased the normal refugee flow to 50,000 annually and accepted the 1969 United Nations definition of a refugee as one unwilling to return to his native land “because of persecution, or a well founded fear of persecution.” The measure also established a category called “Asylee”  which allowed 5,000 refugees already in the country illegally or as students to apply for formal entry.

Almost immediately, the new policy was tested by the Mariel Boatlift which brought 125,000 Cubans to the United States within a matter of weeks. The influx demonstrated that presidential parole powers would be continued, and that they would continue to exceed legislative limits.

No official enumeration of immigration took place before 1819, but most authorities agree that perhaps a million European and African immigrants came to the US before then.

Between 1819 and the enactment of the 1924 Immigration Act some 36 million immigrants arrived.

In the decade before World War I, more than a million immigrants arrived each year.

Between 1935 and 1945 nearly 2.3 million came, an average of less than 125,00 annually. Arrivals were inhibited by the more restrictive immigration act passed in 1924, and by the Great Depression and World War II.

The chart below details legal immigration to the United States by decade from 1951 to 1998 (based on INS data).

The bulk of the refugees during this period of time came from communist regimes, especially  Poland, the Soviet Union, Romania, China, Nicaragua, Vietnam, Laos, Cambodia, Ethiopia, and Afghanistan.

Immigration from Mexico, and those overstaying their visas became matters of immediate concern.

Input from the Department of State assumed less significance than during the Cold War.  Still, State was given the responsibility of administering the lottery provisions of the Immigration Reform and Control Act (IRCA) of 1986 and its successors.

The major functions of IRCA were:

These functions created great anxiety in the Caribbean — especially in the Dominican Republic and El Salvador — where economies were greatly dependent on migrant remittances.

To cite one example, President Jose Napoleon Duarte of El Salvador wrote President Reagan in early 1987 requesting that Salvadorans in the US illegally be given “extended voluntary departure” (EVD) status, whereby the attorney general’s parole power would enable illegal immigrants to remain. EVD was eventually granted on humanitarian grounds. Forms of EVD or its equivalent were put into place during the Clinton presidency for Salvadorans and Nicaraguans by both the administration and Congress.

In October 1991, the US government removed some 300,000 names from a list of “undesirable aliens.” The list was begun in 1952 in an effort to keep communist infiltrators out of the country.

Clearly the more than 25 million post-1950 immigrants have changed the face of America. As late as the 1950s immigrants from Europe were still a bare majority of all immigrants. By the 1980s, the European share was down to about 10% and immigrants from Latin America and Asia were predominant.

Today, immigration is a hot button issue. Will the US continue to welcome refugees from abhorrent regimes as we did in the Cold War? Or will the nation become more insular and unwelcoming? At this writing, the future is unclear.