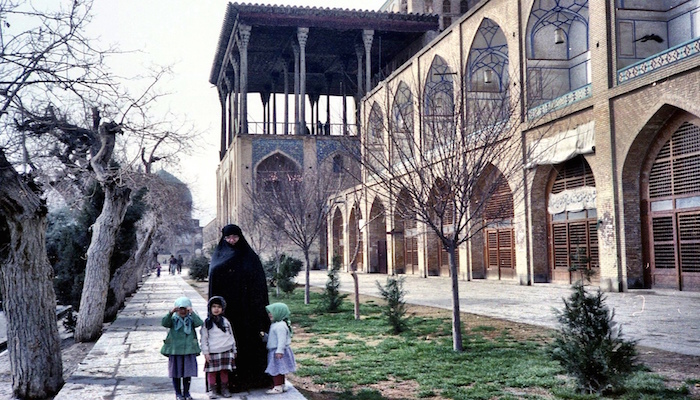 During the Cold War, Isfahan’s central location contributed to its growth as an industrial center, and the city’s military facilities were prime beneficiaries of the shah’s defense expenditures.

In the post-revolutionary period, despite early protestations, militarization remained pervasive, though changed.

As the war with Iraq was winding down, just when it might seem appropriate to return to the early rhetoric of the revolution, the Ayatollah Khomeini stated:

I hope that no one thinks that with the ceasefire and the impending peace negotiations we do not need to strengthen our defense and expand our capacity for further military production. In fact, the development and expansion of our arms production industries should be a foremost goal of the Islamic Republic’s reconstruction policy. We must be vigilant at all times against aggression towards our Revolution by the superpowers or their minions.

Military-industrial production changed, however, and was now centered not on the American defense corporation but on the production of small arms and ammunition.

By the end of 1987, Iran had become self-sufficient in many categories with small armaments plants in Tehran and Shiraz.

The northeastern city of Mashhad gained from its proximity to the Soviet Union and Afghanistan, taking over Isfahan’s position as the nation’s second largest city. Wealth from the Shrine of the Eighth Imam, Reza, located in the city contributed to its new standing.

During the Cold War, Isfahan’s growth was dependent on factors unrelated to those affecting urbanization in Iran’s other cities. While the focus of urbanization in the Pahlavi period was on rural-urban migration, Isfahan, in addition, attracted a large foreign community along with Iranians more educated than the usual migrant. Later, while other cities attracted large-scale immigration resulting from the Soviet occupation of Afghanistan and the two Gulf Wars, Isfahan was less impacted.

A US Department of State publication estimated the number of Afghan refugees in Iran at 1.9 million in 1988. The bulk of the new arrivals settled in Khorasan, Sistan/Baluchistan, Kerman, Fars, Yazd, and Tehran. The Iran-Iraq War was also a dislocating force with over 2.5 million individuals losing their jobs and homes.

Along with the rest of Iran, Isfahan was faced with the large-scale task of postwar reconstruction. Public debate has centered on the immediate need to rebuild war devastated areas and to provide for the families of war martyrs. The issue of social justice as regards the poor has lost its prominent place on the list of immediate priorities.

Rural-urban migration has continued to flourish despite growing unemployment and insufficient economic opportunity.

Efforts by the Islamic Republic to resolve its problems face nearly insurmountable domestic and international challenges. Indeed, some say that “the roots of the country’s badly fractured politics must be sought in its obsolete political culture.” They call for an Iranian “perestroika,” citing the need for a better image and perhaps even a new sense of identity.