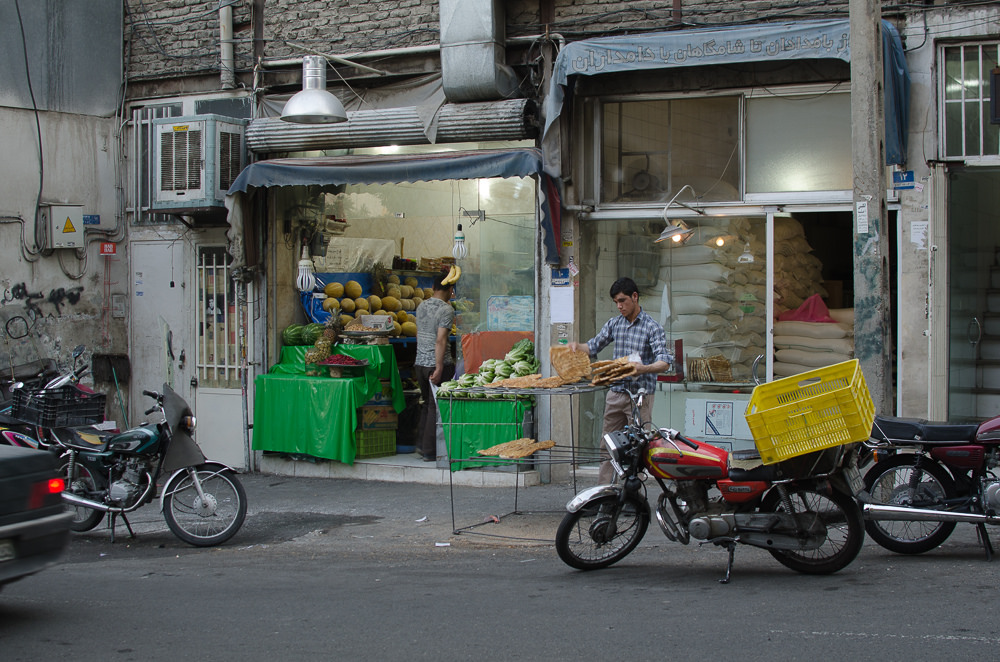 Revolutionary  leadership convinced many Iranians that their demands for democracy, national independence, and social justice would be realized with the adoption of a new Islamic form of government. This became difficult as the struggle for independence from the American superpower played out in the context of the war against Iraq.

The impact of the Iraq War on urban areas made earlier promises for social justice difficult to accomplish.

Rural-urban migration was greatly exacerbated due to war displacement as refugees from war areas — officially estimated at 2 million — combined with an influx of over 1.5 million Afghan refugees to flood the streets of Iran’s urban areas.

In his book Winners and Losers of the Iranian Revolution: A Study in Income Distribution, Sohrab Behdad reports that many of the unemployed — primarily young males seeking unskilled jobs — became street vendors in the thriving open black market. While this group benefited from growing shortages, many more of the displaced were angered by the unfair distribution of what was available.

In order to defuse the tension, the government implemented a food rationing system for meat, rice, and dairy products. Despite this effort, rumors of corruption and inequity provided reason for increasing discontent, and protest demonstrations were reported.

Unable to provide a ‘quick-fix’ for the continuing deprivation, Khomeini called for cuts in consumerism as an “essential part of the Islamic faith.” He appealed for patience in accepting economic shortcomings.

Despite the fact that enthusiasm and vocal support for the war effort persisted, Khomeini could no longer deny evidence pointing to increased bitterness. As Behdad notes, the narrowing income inequality reported for the two years immediately following the revolution was unarguably reversed. Using “expenditures of urban households” as an index of well-being, “the share of expenditures for the poorest 10% dropped to their 1977 level by 1982, and by 1983 was only 76% of the 1977 level.” Meanwhile, population growth continued.

In an attempt to address seemingly insurmountable problems, Khomeini named 1983-1984 “the year of the mostazafin.” He spoke of the gulf separating the ‘shanty-dwellers’ from the ‘palace-dwellers’ and asserted that the betterment of the mostazafin condition was their “right” — a right they had earned by their contribution to the revolution and their sacrifices in the war.

Rhetoric proved insufficient, however, since the elements of the nationalized sector which were designated to assist the poor migrants were inefficient and operated at a loss.

In 1984, the Foundation for the Disinherited estimated real earnings equivalent to around $2 billion and expenses of $4 billion a year.

The ensuing debate over the distribution of wealth and measures to improve the lot of the poor gathered steam in the winter of 1983-1984.

Ultimately, the issue of the relationship between the private and the public sectors, and the question of how to achieve social justice remained unresolved. In fact, the controversy increasingly revolved around the nuances of Islamic law, culminating in a dispute over whether the government or the private sector should control the economy. This debate culminated in a crystallization of Khomeini’s evolutionary thinking about the mostazafin.

Ervand Abrahamian says that at the time of the revolution, Khomeini’s portrayal of society revolved around the “two warring classes” mentioned above — the upper class (oppressors or palace dwellers) and the low class (the oppressed, the exploited, the shanty-dwellers).

Beginning around 1982, class divisions acquired a different caste. Three separate classes emerged, an upper class formed of remnants of the wealthy and Western-educated families that had supported the old regime; a middle class formed of clerics, shopkeepers, civil servants, intellectuals, tradesmen, and bazaar merchants; and a lower class formed of workers, peasants, and shanty town dwellers.

As the previous imagery of two antagonistic classes became less powerful, the “mostazafin label” changed in definition. No longer did it carry its earlier connotation of “deprived masses.” Instead, it became a political label for all supporters of the new regime, including wealthy merchants. As might be expected, this had far reaching effects so far as the commitment to social justice was concerned. Now the interests of the migrant poor no longer required the abrogation of private property; the prime concern was the continuing fight against oppression and exploiters.

Certainly the unemployment situation in Iran’s urban centers worsened during the post revolutionary period. In his book, Revolution and Economic Transition: The Iranian Experience, Hooshang Amirahmadi says that, on average, 302,000 newcomers entered the job market each year, while only 224,000 jobs were created. He estimates that rural-urban migration was responsible for about 20% of all new entrants in urban areas, and that about 64% of the total unemployed lived in cities. Much of the new employment that has been created is to be found in the low-paying informal sector and in the pursuit of illicit activities.

Low job growth, the increasing population burden, and low productivity have combined to effect a 47% decline of gross domestic product between 1979 and 1987. This decrease has had a disproportionate impact on the poorer sections of society. Not only did the poor have less money to spend, but their numbers are expanding.