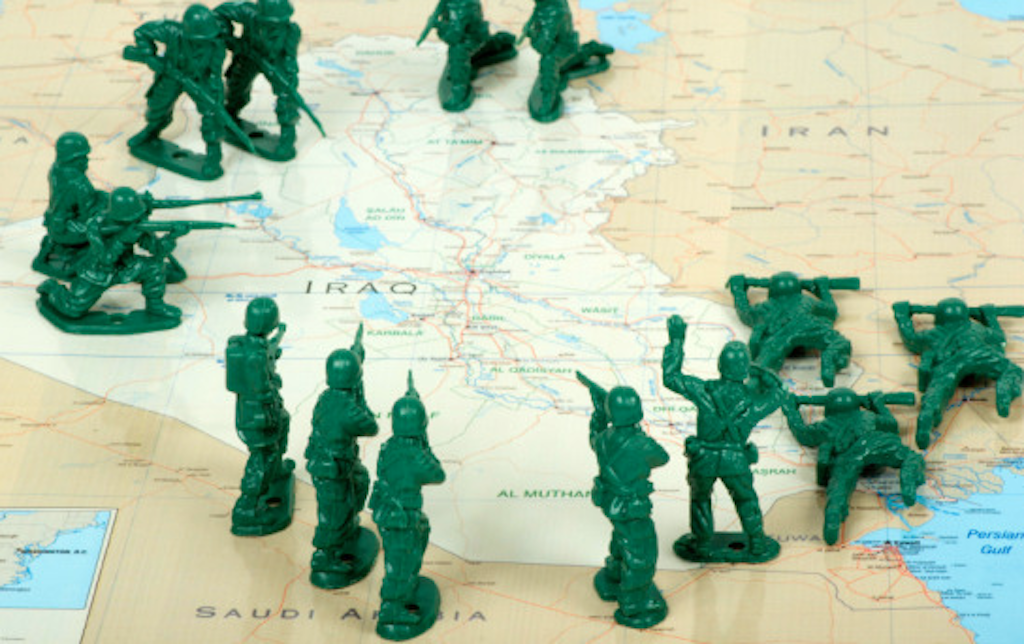 During the first years of the Iran-Iraq War both superpowers attempted to keep some distance from the conflict.  Both the United States and the Soviet Union abandoned neutrality, however, when they deduced that the war was uniting Iranians behind the Khomeini government and that a victory for Iran was possible.

The Soviets resumed arms shipments in 1982, and after Iran declared the Tudeh Party illegal, arresting a thousand of its leaders and members and expelling eighteen Soviet diplomats, the flow of Soviet arms to Iraq became a flood.

The US also changed its position, restoring diplomatic missions with Iraq, extending almost $2 billion in commodity credits, and allowing the country the use of American intelligence sources. American interests became even more explicit when Iran threatened to close the Straits of Hormuz.

Subsequently, the Iran-Iraq War “floated” on the price of a barrel of oil.

A “tanker war” began in 1984 with both nations attacking oil installations and commercial tankers, including a missile attack on the USS Stark which killed thirty-seven Americans.

Eventually both superpowers and five European navies engaged in the regional dispute.

At the same time, Iraq began a “War of the Cities,” launching missile attacks against Iranian towns and cities, eventually focusing on industrial targets in important urban areas. Civilian casualties were steep.

In a two week period in February 1988, a total of more than one hundred missiles were fired at Tehran, Qom, and Isfahan, along with bombing raids on another thirty-seven cities, Iran retaliated with bombings and missile attacks on Iraqi cities.

Meanwhile, Israel entered the fray. That government justified its resolution to sell arms to Iran, arguing that such activity would increase Iraqi casualties and extend a war that ultimately served the interests of the US, primarily by preventing Sadam Hussein from establishing hegemony over the Arab side of the Persian Gulf.

Israel’s decision had enormous impact when, in conjunction with a small group of American National Security Council (NSC) officials, the Israelis became key players in a plan to sell Iran arms and spare parts in the hope that it would expedite the release of American hostages held in Lebanon. The Americans had been seized in 1984 by Middle East terrorists supported by Iran.

The plan soon broadened with the suggestion that the funds raised from the sale of arms to Iran be channeled to assist the Contras in Nicaragua.

President Reagan’s humanitarian interest in the hostage situation was strengthened by several other factors: a growing fear that the Iranians were “exporting revolution” to oil rich Saudi Arabia; concern over the impact of the falling price of oil on America’s domestic oil industry; and continued obsession with the Soviet threat.

The associated scandal undermined the credibility of the Reagan administration and eventually evolved into a constitutional crisis.

According to James Bill, the episode was pointless.

The Iranian initiative succeeded only in replacing three American hostages with another three, arming Iran with 2,004 TOWs and more than 200 vital spare parts for HAWK missile batteries, improperly generating funds for the Contras and other covert activities …. undermining US credibility in the eyes of the world, damaging relations between the Executive and Congress, and engulfing the President in one of the worst credibility crises of any Administration in US history.

While the President clearly supported the arms for hostage strategy with great enthusiasm, controversy continues over his knowledge of the Contra funding. The President had, however, authorized the CIA to spend millions to equip and train the contras in clear violation of US neutrality laws. The CIA trained the Contras in the southern United States, then shipped them to Nicaragua through Honduras.

If you enjoyed this article about Iran during the Cold War, you may want to look at some related posts. Just click on the links below.

THE NIXON APPROACH: IRAN AND IRAQ

US COVERT STRATEGY IN IRAN

COLD WAR: EARLY US MILITARY AND ECONOMIC ASSISTANCE TO IRAN

For additional Cold War news and events, please be sure to connect with us on Facebook. And of course, don’t forget to ‘Like’ us!